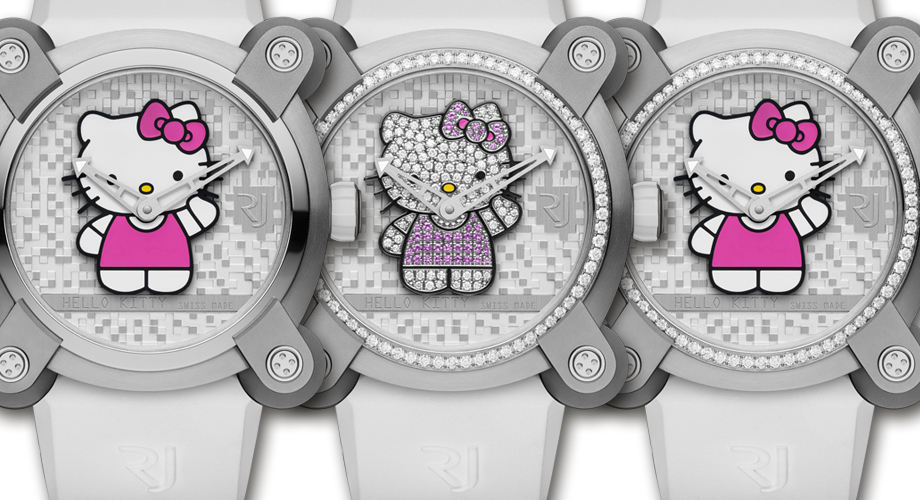 Romain Jerome has decided to release three watches celebrating the Sanrio idol Hello Kitty, which should pretty much make your day.

Romain Jerome’s new watches all show this beloved Japanese character from Sanrio, in three different versions including one that is gem-set.

The watches have different finishes, but they all feature Hello Kitty prominently at the center. There are three types: glossy with the lacquered applique and the polished bezel, sparkling with an added set bezel, or glittery with the applique in diamonds and pink sapphires. Each of these models will have a limited edition release of 76 pieces, to mark 1976, the year that Hello Kitty first became prominent in American culture. Hello Kitty was first added to the Sanrio character lineup in 1974, but this way each set gets two more pieces, so I’m sure everyone’s happy about that.

Even if Hello Kitty was entirely unknown to you before this, how can you not love such a cute and cuddly figure? And for those of us who have long known of her enduring charms, she is an adorable figure who maintains a constantly upbeat attitude, providing strength and resilience to help millions of Japanese fans get through the day. Hello Kitty is here to soothe your existential angst.

Hello Kitty is indeed an international symbol at this point; she is still much beloved in Japan, but her influence has spread throughout the globe, as her image was carried on the covers of pencil boxes everywhere.

Hello Kitty is Romain Jerome’s very first feminine collection. (We call that “hitting the ground running.”) Although Hello Kitty was first created in the 1970s, there can be no denying she has stood the test of time. The figure you see on the Romain Jerome watches is the very same one that schoolchildren first saw in the 1970s. She has been around for along time, but these watches may not be, as fans snap them up. So go say Hello at your nearest Romain Jerome soon.