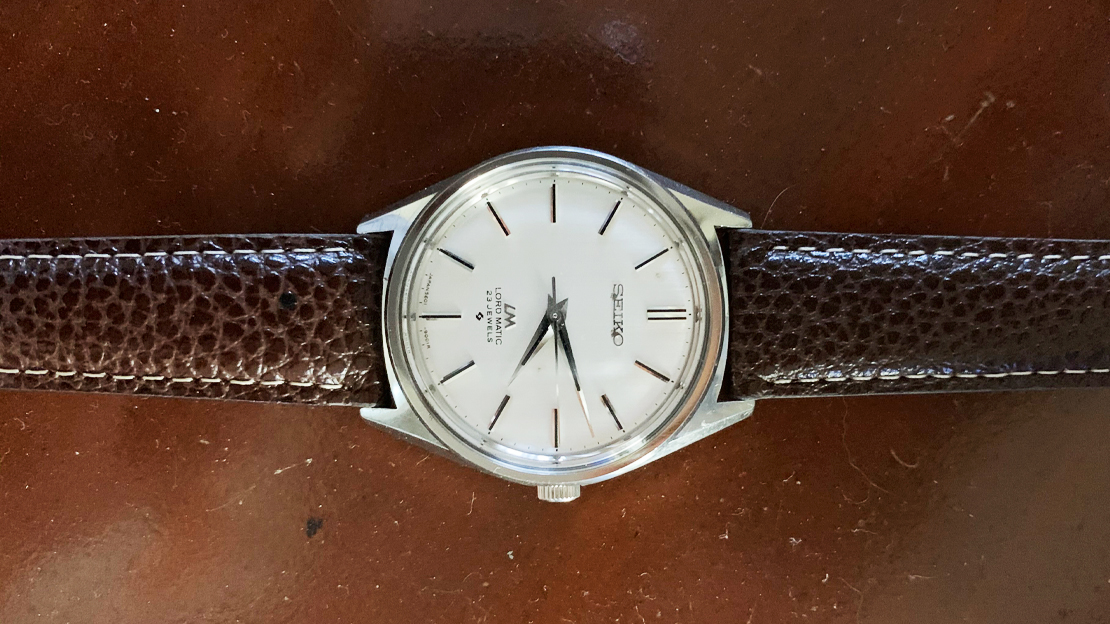 The search for a BMBY Seiko reached its conclusion today when the timepiece I acquired from a Japanese online seller arrived at my doorstep via FedEx. From start to finish, finding the right model circa 1973 took about 3 months (four counting the couple of weeks I couldn’t actively look for one); it could have possibly been shorter if it weren’t for the lockdown due to the prevailing pandemic.

The backstory to this hunt began when I was looking for a timepiece to give as an anniversary present to my Significant Other who is an avid watch collector herself (more than myself to be honest). Her favorite piece is a JLC Master Ultra-Thin among other mechanical pieces. She does have one sporty watch (a Bvlgari Octo I believe) but the common theme is they are all less than 39.5mm. Knowing that, the search began with finding out what models Seiko sold during 1973. Finding a blogpost that summarized the releases for the year made it relatively easy to at least find out the ideal watch and a backup option if what I wanted to track down became futile. Given that Seiko’s must have releases then were predominantly chronographs and dive watches (a bullhead chrono was available somewhere down the line but it was not in play for me primarily because of its condition), I still saw that they had a King Seiko Hi-Beat and a Lord Matic unveiled that year. So, now I had a target or two that I could seek out specifically.

It was slow going and as our anniversary was only a fortnite away, it became clear I wasn’t going to make this deadline. At least her birthday was a solid couple of months away (BMBY Aug 1973 was what I was aiming for since our anniversary had long passed) but at the rate pieces was turning up, it became clear I would have to settle for a birthyear piece that was either a King Seiko or Lord Matic. Even if a BMBY watch other than those two wouldn’t have been an option I decided early on. As June rolled in and a close friend who’s a vintage Seiko collector dropped the adage “let the watch come to you”, I knew I had to turn to the site which I was avoiding from the onset, preferring to stay away from it due to past purchase experiences years ago which caused more hassles than I care to go through again. But, there I was keying in “1973 Seiko” on Ebay.

Off the bat, there was a July 1973 KS Day-Date Hi-Beat Special Edition with a rare brown dial and gold beveled bezel (as described) from a seller in the US. BMBY was July 1973. Close enough that I would have pressed the “Buy Now” button not caring how long it would get here or if the asking price was too high for the condition of the watch. Still, I decided that since there was now some sort of fall back option, I could refine my search and see what might turn up. That was when this Japan-based seller turned up and he specialized in vintage Seikos only. He seemed to be a reputable vendor with over 2,200 positive transactions and zero negative feedback. Best of all, he had on hand this 1973 Seiko Lord Matic in pristine (even for a 47-year old watch) condition. There were minor scratches on the side of the case plus a few blemishes on the dial but the movement was running well (when you purchase a watch, he will send you a video with the watch movement being bench tested before shipping off the watch which we will feature here if he gives us permission to do so as well as mention his name if he replies in time before we run this article) and was in original condition. BMBY upon checking via www.retroseiko.co.uk was May 1973 (I didn’t realize it but my SO pointed out that the month was our anniversary month so fortuitously, the month and year of production works out well) so this sealed the deal. I chose FedEx as the courier of choice despite a steeper shipping fee but anything to avoid having such a precious item pass through our local postal system was worth it.

Five days after getting the seller’s video and the email from FedEx that the package was leaving their facility in Japan, it was here with me. Job done.

While there are plenty of local sellers of vintage watches around, I just didn’t want to sit and wait for something I wanted to come find me. Luckily, the “one” was one mouse click away.