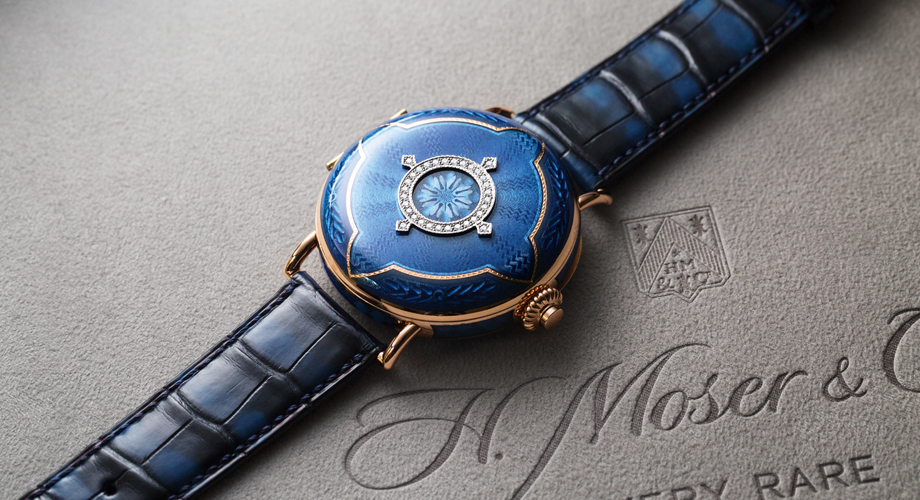 H. Moser & Cie have produced a most elegant watch, one beauty inspired by another from a different time. The newer piece is strikingly resonant of the original, and in every way both celebrates the history of H. Moser & Cie while highlighting their modern capabilities. Thus, we have the Heritage Tourbillon from H. Moser & Cie.

The modern Heritage Tourbillon is a wristwatch, and even if you knew nothing about it at all you would love it for its looks alone. The case is a large 46mm, and the dial is done in white Gran Feu enamel. But that dial is protected by even more than the usual sapphire crystal, because the Heritage Tourbillon has a pocketwatch style cover that adds even more style to this 10-piece limited edition. It’s one of the few things that might distract you from the beauty of the dial.

The reason for this pocketwatch cover is the source of H. Moser & Cie’s inspiration. The Heritage Tourbillon is a tribute of sorts to a H. Moser pocketwatch from the late 19th Century. That pocketwatch had a case made of blue engraved enamel; furthermore, the case was studded with diamonds. That timepiece inspired the artisans of H. Moser & Cie to replicate, almost exactly, the pocket-watch in a modern, wristwatch form.

The H. Moser & Cie Heritage Tourbillon is unusual in that it retains the front and back covers that protect the enamel dial and sapphire crystal caseback. These kind of covers are quite typical of a pocketwatch. (Indeed, that click of the cover snapping shut is one of my favorite things.) But it is rather unusual to see them on a wristwatch. Perhaps H. Moser & Cie really wanted to go the extra mile in replicating the original. But more likely they wanted to keep the cover because of the incredible beauty that they saw in the original, and have given new life in the Heritage Tourbillon.

If the white dial of the watch is eye-catching, the rich blue of the cover is downright stunning. The deep color that the enamel artists have achieved is truly remarkable. The watch has a luster that makes it a pleasure to look at, and indeed difficult to look away.

This style of enameling is an extremely time-intensive and labor-intensive piece of work, but it produces results so deeply immersive and enchanting that you feel like you could fall into them. Gran Feu enameling takes the name from great Fire; the term refers to the multiple kiln firings that are required in order to create the depth and clean surface that marks the best examples of the craft.

Enameling begins as powder: the artist selects the enamel powders that will be used to create the final result. However, it’s not a simple matter of picking what you like; the kiln firings will melt the powder and fuse it into a single surface. It will also change it. (Fire does that to things, as you have probably already learned.) It changes things, and multiple exposures to extreme heat (which is basically what kiln-firing is) will change things again and again, slightly different each time. It takes a master of the craft to know exactly how that is going to turn out. Enameling is one of those crafts that definitely gets rewarded by experience, but if spending a lot of time around hot ovens isn’t your thing, then it’s best to avoid enamel. Even making a single enamel piece in Gran Feu enamel will require repeated instances of kiln-firing, so, it’s a part of the job you’re going to do a lot.

The wristwatch is a direct tribute to the pocketwatch of years gone by; it even retains the protective covers, both front and back.

The result, though, can be nothing less than serene. The covers and dial of the H. Moser & Cie Heritage Tourbillon are proof enough of that. And of course there is the tourbillon within, prominently placed at the 6 o’clock position.

The cover is not only enameled; the Heritage Tourbillon also has guilloché engraving and diamonds set into it. This all combines to make a piece of considerable beauty. I don’t know how comfortable it is to wear a watch with a 46mm case and two pocket-watch style covers, but in this case I would love to find out.

Last year H. Moser & Cie came out with a unique piece also inspired by the pocket-watch. That one was a skeletonized tourbillon, similar in many ways to this limited edition. In that piece the cover color was purple, whereas with the Heritage Tourbillon the brand has chosen to go closer to the original blue.

Both of these watches show a distinct link of the H. Moser & Cie timeline, from their history to their current incarnation. The brand puts out a lot of very contemporary pieces. (One of their recent releases was said to be the horological equivalent of mocking the Apple smartwatch.) But they are clearly no slouch at the classic watchmaking skills either. The decorative skills on display here are not only masterfully executed, but they have been done with an artist’s eye. They say imitation is the sincerest form of flattery (although, you know, maybe not so much with the Apple mockery) but in this case H. Moser & Cie is re-accomplishing the skills from their own past. Not just the capability, but the artistic decision to make such a piece, speaks well for the company’s future… as well as its past.