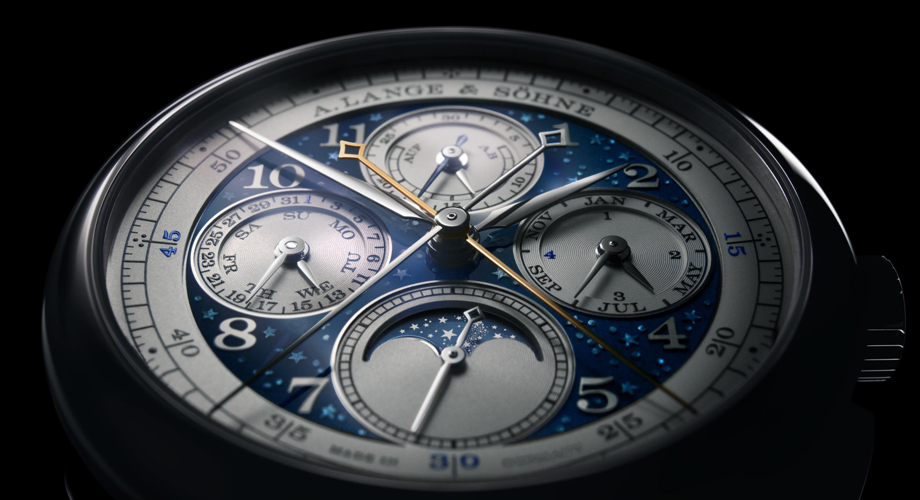 With one move, A. Lange & Söhne dismisses their reputation for stark severity.

A. Lange & Söhne makes magnificent watches, but they are somewhat austere. Their clean spare lines were something of a signature, an austerity that enhanced the work. Indeed, one might have felt that maybe A. Lange & Söhne were perfectly competent, but perhaps lacking a little in empathy. They showed the necessary and nothing else. Well, not any more.

The new 1815 Rattrapante Perpetual Calendar Handwerkskunst from A. Lange & Söhne joins a very limited group of A. Lange & Söhne watches to feature this particular artistic decoration. The watch is of course mechanically fantastic, but what is going to first catch your eye is the sprinkling of stars arrayed across the watch. You may be so shocked that you can’t go on… but trust me, it’s worth it.

You may already be familiar with the 1815 Rattrapante Perpetual Calendar: it came out in the year 2013 to considerable acclaim. Indeed, in that year it won at the Grand Prix d’Horlogerie de Genève. In fact, it won twice, as it took the award in the Grand Complications category and also won the Public’s Choice award.

“They showed the necessary and nothing else. Well, not any more.”

The watch indicates time in hours, minutes, and small seconds. It has a split-seconds chronograph. It also has a perpetual calendar with date, day of the week, month, moon phase and leap year displays. There is also a power reserve indicator.

The entire surface of the timepiece has stars scattered across it. A. Lange & Söhne gathered their finishers, their engravers, and their enamellers to make this timepiece as striking outside as it is on the inside.

This is the first of their watches to combine enamel art and engraving on the watch dial. Solid white gold is the base, and then deep-blue enamel is used, with the relief-engraved stars seemingly an extension of the moon phase display. The numerals are flush with the enamel. The dial is surrounded by a flange ring with the traditional railway-track minute scale.

On the back is an amazing delight: a hinged cuvette covers the sapphire crystal caseback. It shows a relief-and-engraving image of Luna, goddess of the Moon, and depicts her traditional billowing veil, crescent diadem, and a torch, which she uses to light up the darkness. A raised star and cloud relief in blue enamel surrounds and completes this picture.

Once the cover is lifted, the watch movement is visible, with the star motif continued on the operating-lever, the cover and the chronograph bridges. The 1815 Rattrapante Perpetual Calendar Handwerkskunst is an astonishing piece of skill and of art. And it just goes to show that when A. Lange & Söhne DOES decide to decorate a timepiece, they can capture even the sky and the stars.