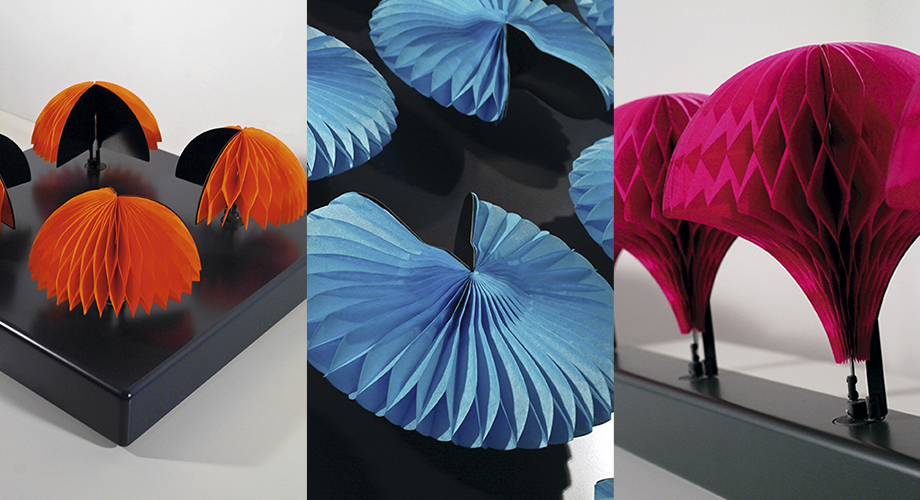 The MB&F M.A.D. Gallery is as creative, unconventional and offbeat as the horological machine-makers that call it home, and it tends to find kindred spirits and give them a home too. In this instance they have given a berth to Nils Völker, a German artist who has created the exhibition “Fuchsia, Orange & Royal Blue” out of such seemingly non-artistic materials as plastic bags and children’s toys. In this case, it’s those paper fold-out honeycomb party decorations that you can pick up at any party supply store – but you ‘ve never seen them dance before.

Nils tends to work on a pretty large scale, such as his work “Twelve” which was commissioned by the Taipei Fine Arts Museum. For the M.A.D. Gallery, he downsized his work appreciably, which just goes to show even madmen can be courteous to other madmen. No, seriously, it’s an interesting experiment, because Völker’s work tends to have a lot of impact not just through creative use of materials but through size and repetition. The M.A.D. Gallery, charming though it is, has a cozy, intricate, intimate feel, but it does have certain size restrictions. “Fuchsia, Orange & Royal Blue” will be a way of testing the effect of his work when it is downsized to, say, a wall installation, instead of something that can literally fill a warehouse, such as Völker’s “Nineteen.”

But bear in mind that still photographs are not conveying the full impact of his art: these are animated works, engine-driven, with the paper honeycombs folding, unfolding and spinning in choreographed motion. And also in sound. The artist made the engines as quiet as possible, so that the sound of the paper crinkling as it folds and expands becomes a part of the living work.

The extremely quiet motors allow the sounds of the crinkling paper to be heard and not drowned out by a noisy mechanism. “One reason I wanted to make the motors so quiet is to make people forget about how the piece works and just enjoy the beauty of when it is running,” said the artist.

This project allowed me to explore my work from a different perspective” Völker reveals. “It was an exciting and challenging task to perfect each and every detail of the architecture and movement.

Indeed, the back of the piece – the mechanics that make it work, so to speak – is just as impressive as the front. Völker installed intelligent motors and exceedingly complex electronics, resulting in an electrical labyrinth of wires, circuit boards, and copper connections. “This project allowed me to explore my work from a different perspective” Völker reveals. “It was an exciting and challenging task to perfect each and every detail of the architecture and movement.”

“Orange” is a set of four brilliant tangerine-colored paper honeycombs anchored on a square base measuring 50 x 50 cm. This piece is a limited edition of 28 and works as a small solo piece or as part of a diptych or triptych. The five raindrop-shaped paper décor of “Fuchsia” stand in a single file line creating a striking visual on a long table. There are 18 pieces available that measure 112 x 7 cm in size. “Royal Blue” is limited to 8 pieces and features 16 circular fans in a vibrant cobalt hue dancing on a 110 cm square frame.