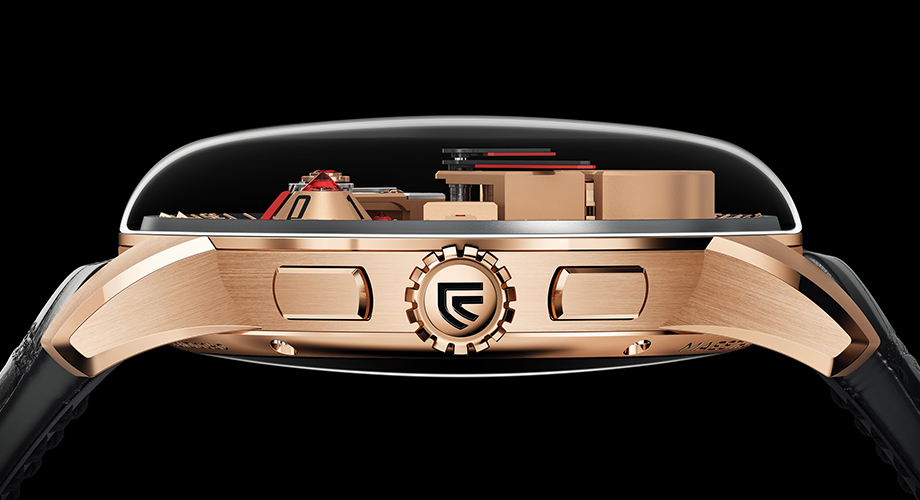 What can we say about Christophe Claret that hasn’t already been said? The man and his company has consistently been one of the most inventive watchmakers out there. They were the first to use sapphire components in a timepiece, he helped raise awareness about ancient Rome by going the multi-media route with a 3D film and a timepiece incorporating a hologram of Emperor Marcus Aurelius in the Aventicum, and let’s not even talk about his minute repeaters, which take the word innovative to the next level.

Then there are his extraordinary “left-field” watches that answered questions that the rest of the industry didn’t even think of asking such as his Vegas-inspired 21 Blackjack, Poker and Bacarra wristwatches. There was the whimsical Margot watch with the “he loves me, he loves me not,” complication. And of course, no one will ever forget the amazing X-TREM-1, a watch that defied all the rules of watchmaking by using magnets to tell the time.

Naturally, all these little horological works of modern art cost a pretty penny. Indeed, Christophe Claret has mastered the business of creating unique and defining examples of watchmaking flamboyance that, for better or for worse, has commanded wholly appropriate stratospheric price points. Which is why it’s such a breath of fresh air to see him slumming it a bit.

Participating in the SIHH for the second year in a row, Christophe Claret presents the Maestro, which should not be confused with last year’s Constant Force Maestoso. No, the Maestro can, in many ways, be considered Christophe Claret’s minimum standard, and showcases the length’s the watchmaker will go to find that balance between their particular brand of aesthetics and their prerequisite level of technicality. And yes, considering the Maestro’s pedigree, this is Christophe Claret slumming it.

Considered “entry level” by Christophe Claret’s standards, the Maestro is imbued with the watchmaker’s aesthetic styling and is visually very similar to many of the brand’s offerings in the past few years. In other words, like most of Christophe Claret’s more straightforward exercises in watchmaking, the new Maestro is a very technical and wholly architectural piece of modern horology that still relies on the traditional codes of Swiss watchmaking.

All this “design” comes together beautifully thanks to a massive sapphire dome that takes the place of the bezel.

But Christophe Claret has never exactly done “straightforward,” which is why despite the fact that the Maestro is sans tourbillon or any other complication whatsoever, its skeletonized dial featuring the hand-wound caliber DMC16 with 342 components, is still a visual journey in itself.

Available in two versions: in grade 5 titanium and in 5N pink gold, the three-dimensional journey begins with the famous Charles X style stepped and skeletonized bridges that have become a signature of the Maison through its various collections. The bridges are made of the same material as the case which adds to the harmony of the piece, and are masterfully bevelled and finished.

At 7 o’clock sits a large balance wheel with countersunk screws and a cylindrical balance spring. The DMC16 movement beats at a leisurely 3Hz, which makes for a relaxing swinging motion of the balance wheel. An interesting detail is the single ruby or sapphire that is used to conceal the shock-absorbing system, ruby for the pink gold version and sapphire for the titanium variant.

Best of all, the skeleton-working of the bridge supporting the escapement represents a clever blend of classicism and modernity, as it does on the two large series-coupled barrels placed one on top of the other for seven days of power reserve that sit at 12 o’clock. The skeletonizing here provides an exemplary view of the blade spring of the first barrel, facilitating a gauge on the state of the power reserve.

Then there’s the unusual date display at 5 o’clock. Made of two cone-shaped aluminum disks, the date is represented by the tens on the upper disc and the units below and performs a semi-instantaneous jump after midnight. This rather large date display is, naturally, patented, and like the balance wheel is set with either a ruby or sapphire.

Unable to help himself, Christophe Claret just had to add a bit of whimsy even in this, his most base calibre. Which is why a second, albeit, smaller cone called MEMO with diamonds on opposite sides and also topped by either a ruby or sapphire draws the gaze to the space between 3 and 4 o’clock.

Like most of Christophe Claret’s more straightforward exercises in watchmaking, the new Maestro is a very technical and wholly architectural piece of modern horology that still relies on the traditional codes of Swiss watchmaking.

All this “design” comes together beautifully, thanks to a massive sapphire dome that takes the place of the bezel. Come to think of it, this huge dome may actually be the FIRST thing anyone notices about the Maestro, especially since it has the added benefit of making the movement look larger than life. Which is why it’s such a surprise that the Maestro is only 42mm in diameter, the smallest diameter in the Christopher Claret collections. Indeed, the Maestro looks a lot bigger than it actually is and it has a lot to do with that dome.

As previously mentioned, just because the Maestro is an “entry-level” Christophe Claret doesn’t mean it isn’t as desirable as other more complicated Christophe Claret creations. Which is why both pink gold and titanium models of the Maestro will each be made in very limited numbers of only 88-pieces each. Perfect for a timepiece named after the master watchmaker.

Monaco Through And Through

A Partnership Of Denim And Bronze

A Glamorous Twist in Time

Cartier presents a watch with a twist, the Maillon de Cartier is precious indeed.

The Watch World On Hiatus