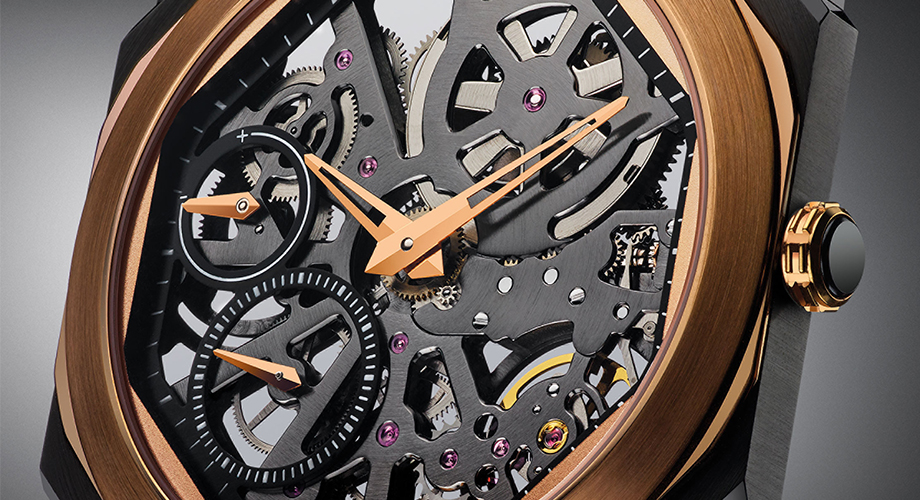 Bulgari has released a watch in their Octo line that pays mechanical tribute to an idea that you might never have expected from Bulgari: namely, that less is more. The intent may have been unexpected, but the watch is beautiful, as you might well have predicted if you know anything at all about this brand.

Beauty is Bulgari’s stock in trade. Sometimes it comes in the form of a mechanical wonder like a wristwatch; sometimes it is the jewelry that they are equally well known for. Sometimes it is really both, as Bulgari is adept at fusing the worlds into a single testament that is both fashion and function.

The Bulgari Octo Finissimo Skeleton is very different from their usual offerings, and you have to decide for yourself whether it’s a difference that you like. Bulgari has a lot of fans, obviously, and some of those fans are going to love it, and some of them aren’t. It is a long walk away from their signature look, and that may be enough to turn you off. There’s no denying the technical sophistication that went into the piece, but whether that equates to loving it is up to you.

If you DO love the piece, you will probably love it for the open-faced complexity of the dial, the intricate exposure of the movement itself, and the beauty of the process where by they took its simplicity, reduced it, and somehow left more than was there before. Visually speaking, it’s a busy watch, much more complicated visually than it is mechanically. But I think that there’s a beauty to be found in intricacy, just as there’s a beauty to be found in simplicity.

As for the watch and the weight of it, no one can deny that Bulgari has done an excellent job in bringing the piece to an almost feather’s weight. The whole ultra-slim Octo Finissimo range is incredibly light, and that alone has a great appeal. Maybe for those of us who love ultralights – and I suppose maybe we all do, at some point – this skeletonized version may be the one that gets you in. Certainly the work that went into lightening it is there for all to see – or not to see, I suppose, since the very nature of skeletonization is to remove whatever is not essential. Maybe that’s the secret of the Octo Finissimo Skeleton – it takes away everything you don’t need, leaving you the very barest of necessities. Lord knows, everyone has moments in their life when they feel the need to do as Thoreau said and simplify, simplify. So maybe the true surprise here is that Bulgari could provide you with the gateway to a simpler, less cluttered life.

As for the watch and the weight of it, no one can deny that Bulgari has done an excellent job in bringing the piece to an almost feather’s weight.

Looking at the Bulgari Octo Finissimo Skeleton is really like looking through it. Not only is it slim to the point of perishing, but it has been skeletonized to the bone, paring away all that is not else needed.

The movement, to start with, is the BVL Calibre 128SK. That’s an ultra-thin skeletonized movement, so you already see what hath Minimalism wrought. The movement powers the hours and minutes on the central hands, and the small-seconds subdial. The power reserve display, equally minimalistic, nevertheless registers up to a 65-hour store, which is even more impressive when you consider how slim the entire affair is. 65 hours of see-through ultra-lightweight watch. The movement vibrates at 28,800 vph, making it quite precise it is machinations. The caliber is 38mm in diameter, but is only 2.35mm thick. The baseplate and bridges are black. (That sounds like the beginning of a rhyme.) They are also chamfered and have circular satin-brushed decoration. Finally, the watch is water-resistant to 30 meters, although it comes with an alligator-leather strap that probably wouldn’t appreciate the immersion… which I suppose is kind of ironic, given its origin.

The case is 40mm in diameter, so the Octo Finissimo Skeleton is wide but thin. The steel case has a coating of diamond-like carbon, making it blacker still. The carbon adds a level of protection that makes the watch even more wear-resistant, and let’s face it, it was ALREADY stainless steel. Bulgari builds things beautiful, but it builds them to last.

The bezel is 18k pink gold, adding that touch of elegance. The winding crown is also rose gold, and it has a ceramic insert. All in all, the watch is only 5.37mm thick. The dial, naturally, is skeletonized. As of course you already knew.