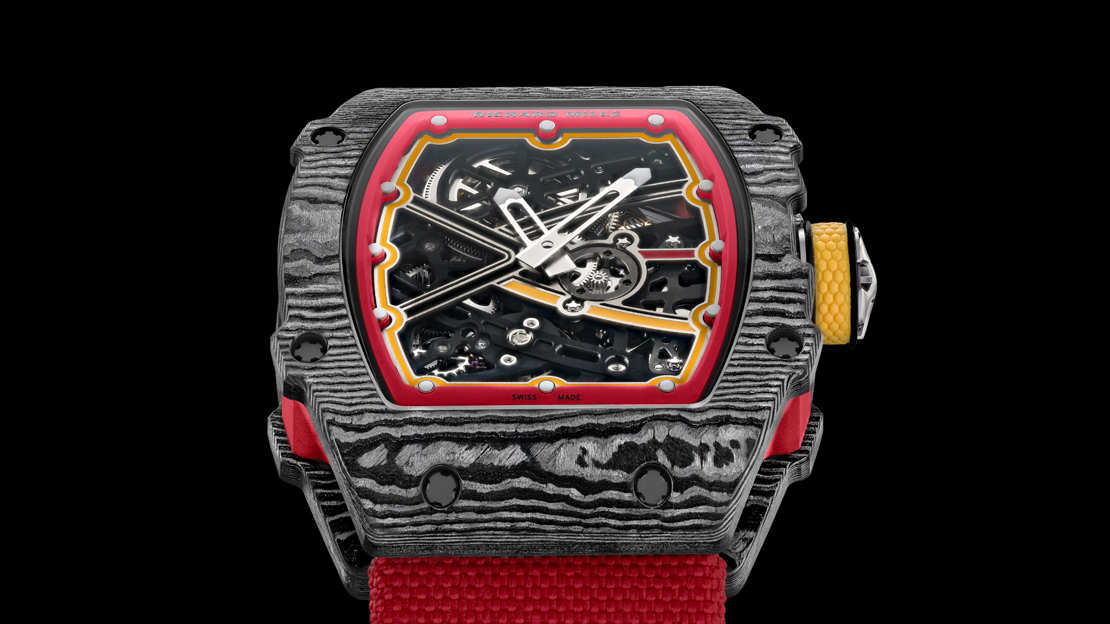 In their unending quest to create the ultimate sports watch, Richard Mille development engineers were given a single directive to comply with: “to create a watch that would guarantee, under all circumstances, the genuine ‘symbiosis’ between the sportsman and his watch which the demands he is subjected to by his sport practice render absolutely crucial.”

The result is the RM 67-02, an extension of the RM 67-01 Extra Flat, which takes the extra-thin, ultra-light concept of the RM 67-01 and literally RUNS with it to create that hitherto illusive physical bond between man and mechanical timepiece unlike anything that has come before.

But to say that the RM 67-02 is a sports version of the RM 67-01 is a bit of an over simplification.   Typical of the brand, a bit more went into the seventh in-house caliber of Richard Mille.  Premier of which is the incorporation of 4 extensions (which we first saw in the RM 59-01 Yohan Blake); not only is it a contributing factor to structural rigidity of the case but is also a hallmark of the brand’s sport watches.

The screws used to secure the 7.80 mm thick case are made out of Grade 5 titanium, as are the base plates and bridges used in the movement.  This means, at just 32g, the Richard Mille RM 67-02 is the lightest automatic watch ever to roll out of Richard Mille’s manufactory doors.  The new comfort straps are entirely seamless, extremely non-slip, and highly elastic, allowing the straps to perfectly fit the contours of each wrist, and adapt to individual morphology.  And the case itself is crafted using the superlight and strong Quartz TPT for the colored front and back plates, and Carbon TPT for the case band, both of which are not only ultra light and shock resistant but are also composite materials exclusive to Richard Mille.

These are colored to match the home countries of each of the star athletes: the snow of the ski slopes is represented by a blue strap and white Quartz TPT case with red accents for the RM 67-02 Alexis Pinturault; Sébastien Ogier, the extremely talented World Rally Champion from France gets a variation on those colors with a full Carbon TPT RM 67-02 with white and red accents; German tennis player Alexander Zverev gets an RM 67-02 with the same tricolor of the German flag: black, red, and yellow Quartz TPT and Carbon TPT; while the RM 67-02 of Fernando Alonso gets the all-blue Quartz TPT and Carbon TPT treatment with red and yellow accents to mimic his helmet color.

Best of all, Richard Mille continues the tradition he started in that the new brand ambassadors will wear the specialized watches out IN THE FIELD and IN COMPETITION!  Making Richard Mille the world’s premier specialist in ultra-light, highly resistant sports watches made specifically for athletes of different specialties.  And with the ultimate symbiont that is the RM 67-02, it doesn’t look like he has any intention of stopping.