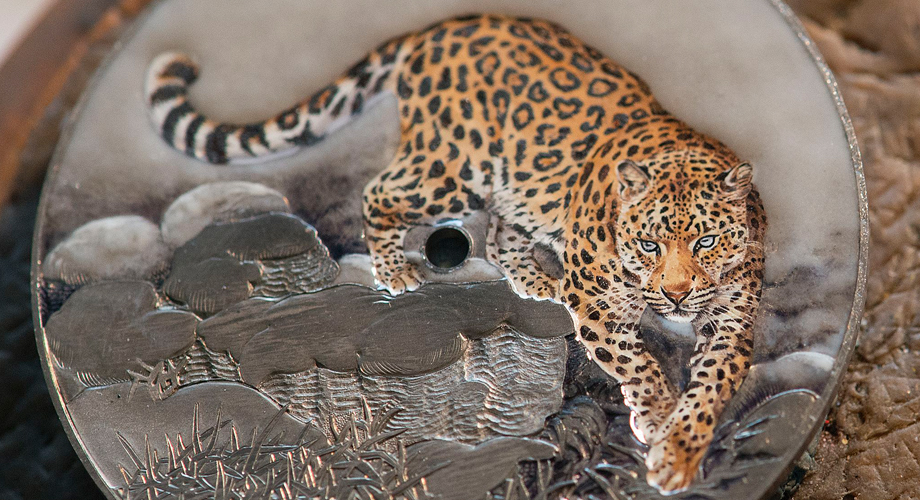 Hermès gives us a couple of idiosyncratic pocket watches, to continue their ever-deepening catalogue of beautiful and useful yet sometimes quirky timepieces. This is not to disparage the quirk; one of those quirky watches won a horological award not so long past. And anyway, Hermès seems perfectly contest to go on their own happy little path with this. Their pocket watches continue this year’s theme of Nature at Full Gallop. The two watches, whose dial decorations very different in both feel and technique, nevertheless sustain our view of the natural world through the eyes of Hermès.

The first watch is the Pocket Panthère. This is a 45mm pocket watch that features an enameled great cat on the white gold dial. (I think that’s generally referred to as a leopard, but the animal does belong to the genus Panthera, so I’m letting that go. If you really want to get technical about wildlife, the same painting was originally featured on the brand’s Arceau Tigre wristwatch, for example. Where it was, obviously, referred to as a tiger.)

Regardless of what you call it (and I REALLY THINK you SHOULD call it a leopard) this watch takes the image from an original painting by Robert Dallet. (Dallet is doing a lot of work for the brand’s Full Gallop theme, and it seems to be a good choice. The man certainly knows his great cats, that’s for sure.)

Here on the pocket watch, just as on the Arceau Tigre, the painting’s image was translated to the watch dial by a process called Email Ombrant. Despite having the name of a modern messaging service, Email Ombrant has a long historical provenance. The term in English would be Shaded Enamel. Which would also be an awesome band name, incidentally.

Email Ombrant is an enamelling technique that combines engraving and enamelling. It creates pictures that are revealed only when the light passes through them. Originally from the Limoges region of France, the technique was patented in 1841 by a man named Paul de Burgoing, in a place called Tremblay, and was first done using porcelain.

Here on the Pocket Panthère, the base of the image is white gold; the image is built up, layer over layer, with the enamel relatively thick in some places, and in others absent so that the white gold itself is seen. The great cat is the only non-engraved element in the whole picture. The cat itself is created by miniature Grand Feu enamelling, with the powder painted on by a tiny brush and then being kiln-fired multiple times. The painstaking process can require up to 25 separate firings.

As the brand puts it, “The artisan fashions the motif in relief before coating it with a slightly tinted translucent enamel. By accumulating in the most sunken areas, the material becomes denser and darker, while the most highly raised zones are barely covered and thus remain very light in colour. The technique calls for an entirely different approach from that of traditional relief engraving. The cavities and raised areas are fashioned exclusively according to the light they will catch or reflect, which is why an Email Ombrant engraving is revealed only once captured in enamel.

Email Ombrant involves perfect interaction between the engraver and the enameller in order to master the complex set of nuances and create the aura of mystery surrounding each work. Together, they analyse the initial design, its degree of transparency and the personality of the piece so as to determine halos, zones of light and shade.”

Then there is the Mille Fleurs du Mexique. The second pocket watch seems more abstract, but in fact it portrays a pattern from one of Hermès’ famous scarves. This pattern was created by Laetitia Bianchi, and it reminds me of the millefiori thousand flowers glass-blowing technique. It’s actually based on an arrangement of cut flowers and the 15th century tapestries that portrayed them. Bianchi was herself Mexican, and the name of the watch is a nod to that heritage.

Here, the decoration is done by miniature painting on a base of mother-of-pearl. Each petal is painted by hand, a tiny accretion of individual touches gathering together into a collective whole that is endlessly intricate and delightful in its beauty. I personally love it when Hermès recreates their scarf patterns on their other works, and although this particular one may not be one of my favorites, I cannot deny the impact that the piece has, nor the incredible dedication that it took to create it.