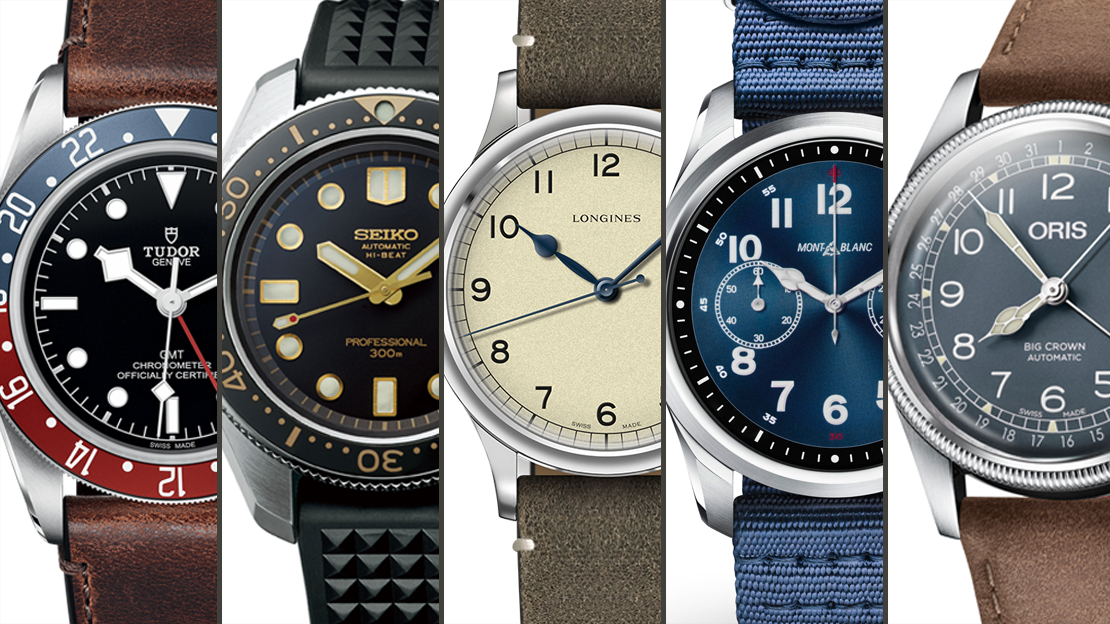 THIS, let’s be clear, is no definitive list. It is not even based on anything approximating scientific methodology. The five watches in this wish list were picked from a purely personal viewpoint, with one eye kept on what could be considered as an attainable price tag. Surely, there are several more you deem more deserving of inclusion. And so we encourage you to send in your own list.

Tudor Black Bay GMT
NO question, Tudor fitting a GMT function and a burgundy-and-blue bezel on its highly successful Black Bay line has been one inspired move — the vintage-y aesthetics of the Black Bay lend themselves well to the GMT furniture, it looks as if the watch has been designed from Day One to get it. Besides the aluminum rotating bezel, 41-millimeter steel case, and a choice of a metal bracelet or a distressed leather or fabric strap, other things going for this piece are its signature Snowflake hands (the second time zone indicator is in red), a genuine 200-meter water resistance rating and a domed sapphire crystal on top.

Plus, the Tudor Black Bay GMT packs an in-house, self-winding movement — Tudor’s cal. MT5652 — which carries a COSC accuracy certification and boasts of a silicium escapement. This decorated calibre spins at 28,800vph and has a generous 70-hour power reserve. Talk about value for the buck.

Seiko Prospex 1968 Diver’s Re-creation
NEWLY crowned as the top sports watch at the 2018 Grand Prix d’Horlogerie de Geneve is the Seiko Prospex 1968 Diver’s Re-creation, or the SLA025. The watch is a faithful recreation of Seiko’s and Japan’s first diver’s watch powered by a high-beat, or quick-spinning, movement (in this case 36,000vph). But while the 1968 original watch was meant for air diving, the new piece is specified for saturation diving. Features it retained from the original are its one-piece case construction and a flat caseback. Of course, the components in the recreation watch are all modern, including the self-winding cal. 8L55, which can store power good for 55 hours.

The 1968 Diver’s Re-creation’s 44.8-millimeter steel case, sealed to depths of 300 meters, gets some Zaratsu polishing, a domed sapphire crystal, and signature Seiko diver’s watch elements on its dial. A silicone rubber strap attaches the watch to the wrist. In other words, there are no frills in this piece, just an honest tool quality.

Longines Heritage Military
LONGINES unveiled the Heritage Military at the 2018 Baselworld; not during any precursor of the Swiss show in the middle of the last century. A closer inspection of this watch only muddles up perceptions further. That’s because its beige-y, faintly yellowish dial is speckled with random spots usually associated with the passage of time, the pattern (if any can be discerned at all) painted by hand and unique to each watch.

Besides its mottled dial, the Heritage Military wears more period-correct styling cues like a railroad minute track, ornate blue hands, a domed glass (although made from modern sapphire crystal), and a greenish/grayish aged leather or Nato strap. The font used for the Arabic numeral markers are typical of the era. The contours and beveling of the 38.5-millimeter steel case and sharp-edge lugs look utilitarian, recalling the time when watches were actually regarded as tools.

Ticking within the Heritage Military is Longines’ self-winding calibre L888.2, which had started out in life as an ETA A31.L01. This means there is nothing fancy with this 25-jewel, 25,200-vph engine which boasts a power reserve of 64 hours.

Say what you will about “fauxtina.” Longines did an excellent job with this one.

Montblanc Summit 2
ANY WIS will wish for a mechanical chronograph. But this is actually an expensive complication, and so it’s a little hard to look for a new timepiece with such a movement on so little budget — especially if what one wants flaunts a prestigious name.

For time-tracking (and sundry other functions), might we propose a smartwatch then?

The Montblanc Summit 2 range of watches fuses the aesthetics of the brand’s 1858 Collection with a reasonably sized 42-millimeter case that’s made of steel, black DLC steel, or a steel-and-titanium combo, and with more than a thousand different combinations of customized indicators, backgrounds, hands and “complications.” That there are 11 strap options available to the watch only extend the variety with which the Summit 2 can be personalized.

A major upgrade in the Summit 2 is its Qualcomm Snapdragon Wear 3100 chipset, which, Montblanc promises, makes the watch quicker to respond to inputs. Plus, it extends the watch’s battery life. Fact is, a fully charged Summit 2 can last an entire week without recharging if it’s set only to tell the time. It could a run a couple of days less in ambient mode, or when the dial is constantly visible. But if all functions of its Wear OS are running, then expect to charge the watch daily.

The Wear OS is compatible with both iOS and Android smartphones. And, true to the vibe of the 1858 Collection, the Summit 2 is simply keeping with the spirit of exploration.

Oris Big Crown Pointer Date
THE Oris Big Crown Pointer Date wears a big crown as a nod to pilot’s watches from the early to mid 1900s, when pilots routinely needed to wind the crown while wearing thick gloves. The watch has added another hand to indicate the date on the accompanying track running around the edge of the dial. Along with this date pointer hand, a round case, tapered lugs, coin-edge bezel and oversized crown have all come to define the watch’s design.

It has a case in 36 millimeters and 40 millimeters, with the former coming in a faint green dial while the latter gets a grayish blue one. The Big Crown Pointer Date is powered by an Oris self-winding movement — the calibre 754, which is based on the Sellita SW200-1, meaning it’s a proven workhorse that sees duty in a number of watch brands. Visible through a mineral glass in the screw-down steel caseback, this 26-jewel movement spins at 28,800vph and has a rated power reserve of 38 hours. Yes, it isn’t exactly groundbreaking, but it’s proudly, rightfully mechanical.