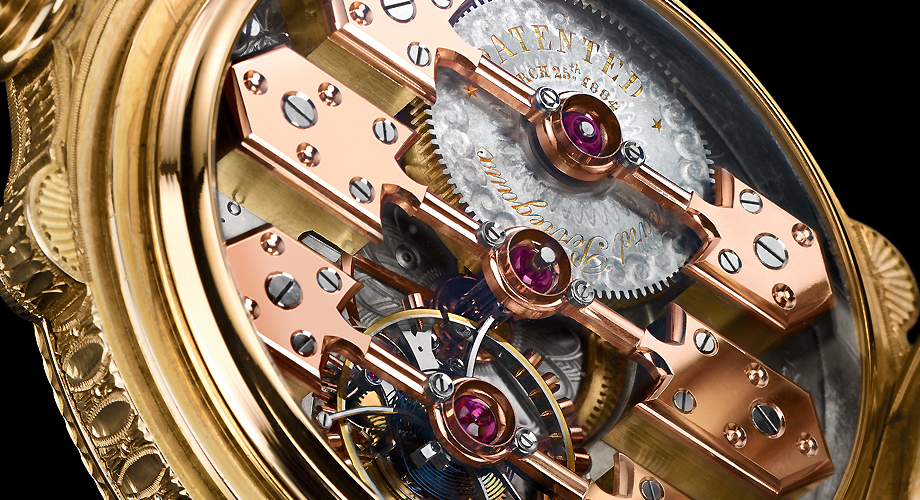 “La Esmeralda” was the first Girard-Perregaux pocket watch to incorporate the Manufacture’s signature movement which in 1889 came into the possession of General Porfirio Diaz who was the President of Mexico at the time. But La Esmeralda is more than a trophy that can be put on display, more importantly it tells the story of a man’s passion for aesthetics and accuracy.

Not even Constant Girard knew how close he was to achieving watchmaking perfection when, after years of research into the functional use of gold in watch movements, Constant Girard presented a movement with three of its bridges redesigned into the form of arrows and placed on top of one another in parallel in 1860. That design reaped the supreme accolade by winning its first timekeeping award from the Neuchâtel Observatory in 1867 and marked the first time a watch movement was no longer just a functional and technical element to be covered up, but an aesthetic element of the watch design as a whole. Indeed, thanks to Girard’s ambitious staging of components, he succeeded in giving the once purely utilitarian tourbillon an artistic dimension and in one deft move gave birth to what has become known as “dramatized mechanics.”

Seventeen years pass and in 1884, Constant Girard successfully files a patent with the United States Patent Office to protect the design of the movement he called the “Tourbillon with three gold bridges”. It was in this same year that Constant Girard presented the first pocket watch to incorporate his groundbreaking movement, the magnificent case of which was engraved by renowned artist Fritz Kundert, who at the time was at the very pinnacle of his career. This piece was named “La Esmeralda,” which was derived from the name of the Paris and Mexico boutiques of Hauser, Zivy & Cie, the famous jeweler and watch merchant. Five years later, Le Esmeralda won the gold medal when it was presented at the Universal Exhibitions of Paris five years later in 1889. It was shortly after that that La Esmeralda found herself in the hands of General Porfirio Diaz.

Indeed, it isn’t far-fetched to say the Tourbillon with Three Bridges single-handedly brought the House of Girard-Perregaux to world renown. Back then, the design was already considered “groundbreaking.” In fact, the so-called a “new vision” in the world of watchmaking, has, indeed, largely withstood the test of time. In 1970, thanks to a lucky chain of events, La Esmeralda reentered the collection of the Manufacture and was placed in the Girard-Perregaux Museum. Fast-forward to 1980, and the manufacture Girard-Perregaux created 20 limited edition pieces of the Tourbillon with Three Gold Bridges that conformed to the original pocket watch design. 1500 hours of work was necessary to create the first of the 20. Then in 1991, to celebrate the manufacture’s bicentenary, the first miniaturized version of the pocket watch was created and the first Tourbillon with Three Gold Bridges made its debut as a wristwatch.

Transcendent and majestic with its inimitable and unequaled design, the Tourbillon with Three Bridges calibre has earned a place in watchmaking history as the oldest watch movement still in production. Indeed, its overall layout has remained unchanged since its introduction in 1860. To celebrate its 225th anniversary, Girard-Perregaux presents an exceptional pink gold Esmeralda Tourbillon, a new iteration of the Esmeralda Tourbillon directly inspired by the original Tourbillon with Three Gold Bridges pocket watch that won the gold medal at the Universal Exhibition in Paris in 1889.

As the successor to the 27 Tourbillon with Three Bridges models already registered with the Neuchâtel Observatory by Girard-Perregaux from 1865 to 1911, the new Esmeralda Tourbillon indeed tells the story of aesthetics, passion and accuracy.

A truly successful blend of artistic, technical and symbolic principles, the new Esmeralda Tourbillon features a mainplate with a barrel bridge, gear train bridge and tourbillon bridge made from solid gold. The double-headed arrow design is entirely hand-decorated and is inspired by the bridges of the historical Esmeralda. The surfaces of the arrows are mirror-polished, the edges of which are chamfered by hand while the flanks are drawn. To increase the visual contrast and to better catch the light, the arms of the bridges are delicately “rocked” – in other words, carefully rounded by hand using a burnisher.

In the middle of these bridges are the diamond-polished settings, which are held in place by two screws, meaning that the barrel, center wheel and tourbillon carriage must be in line with each other. The tourbillon carriage, which is comprised of 80 components, is entirely hand-finished and requires extreme skill from the watchmaker assembling it. With its characteristic hand-polished lyre, another signature of the Manufacture, this perfectly balanced organ, which performs a rotation once per minute, houses a balance wheel which oscillates at 21,600 vibrations per hour (3Hz) and benefits from a large amount of inertia. This caliber measures 16 lignes (36.60 mm diameter) and is 8.41 mm thick, and requires two months of work to assemble its 310 components, including 27 jewels.

In the same vein, the unidirectional automatic winding system developed by Girard-Perregaux also gets a rotor that is positioned concentrically under the barrel rather than on the outer edge. Thanks to this ingenious construction, the watchmakers increased the diameter of the barrel and lengthened the spring to successfully increase the power reserve from the previous 48 hours to at least 60 hours.

The three-tier layout of the Tourbillon with Three Bridges is familiar from the very first glance. Indeed, there’s nothing else like it. All of its components – including the gold bridges with organs visible on the front face, and even the number of arms of the tourbillon carriage – convey an important message: it is a reminder that the number three and its multiples underlie the measurement of past, present and future time. Making the Esmeralda Tourbillon one of the most iconic models of Girard-Perregaux.