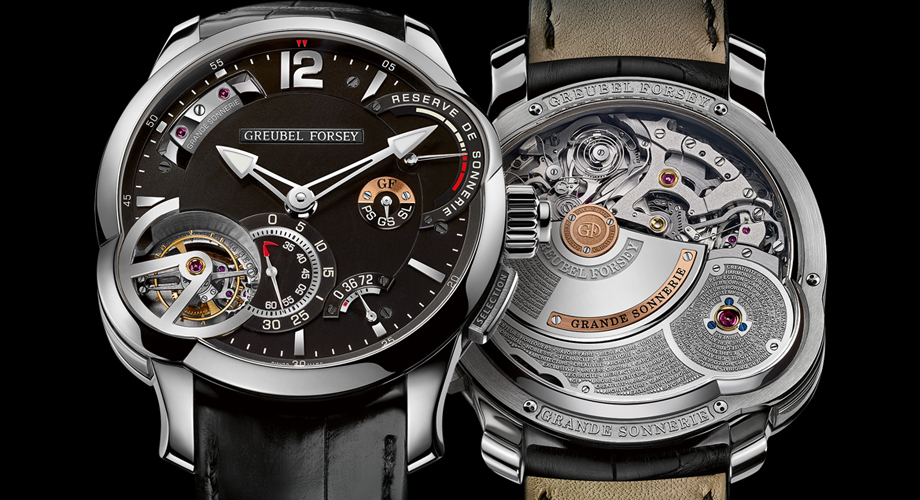 Eleven years of research and development; the assembly of no fewer than 935 parts; the filing of two patents; the development of an acoustic resonance cage producing an extremely pure sound; this is just a glimpse of the gargantuan achievement achieved by Greubel Forsey in creating their first ever chiming watch called the Greubel Forsey Grande Sonnerie.

According to company co-founder and co-watchmaker, Stephen Forsey, “Because we started with a blank sheet of paper, Mr. Greubel and myself and with our team drew up our own specifications of what we wanted to be able to offer to a collector in a Grande Sonnerie.” And that meant taking one of the greatest watchmaking complications, and making it their own. The result is an exceptional timepiece that not only incorporates the company’s 3rd Fundamental Invention, the 24-seconds fast-rotating inclined tourbillon, but also has a grande sonnerie built around it. Literally.

For those not familiar with chiming complications, a grande sonnerie (that’s grand strike to you and me) chimes the time en passant, or “in passing.” When armed, the Greubel Forsey Grande Sonnerie will strike the hour at the top of each hour, as well as the number of quarter hours past the hour, at every quarter hour. While, in petite sonnerie, or small strike mode, the watch will only strike the hours en passant and not the quarter hours. Silent mode, on the other hand, is self-explanatory and is accessed via the pusher at 4 o’clock and indicated by a sub-dial at 3 o’clock marked PS (petite sonnerie), GS (grande sonnerie), and SL, for silent mode. Best of all, the Grande Sonnerie is also a minute repeater, which means the watch will chime “on demand” to the nearest minute, when the function is activated.

Grande sonnerie watches (whether in wristwatch on pocket watch form) are significantly more complex than minute repeaters. And one of the biggest differences between them is how they are powered. A repeater has a separate spring barrel for the striking mechanism that is wound for every activation of the chime by a push slide or button on the case. A grande sonnerie, on the other hand, requires a tremendous amount of energy for it to chime for an entire day. Thus, it, too, has its own separate mainspring barrel, the difference being, it is wound via the crown to ensure an entire day’s worth of chiming.

And before all you Greubel Forsey purists out there go out and buy torches and pitch forks, please know that there is a twist: the winding weight only loads the striking barrel, because the Greubel Forsey Grande Sonnerie is still a hand wound timepiece with 72-hours of chronometric power reserve (indicated on the dial at 5 o’clock) thanks to two, coaxial, series-coupled, fast-rotating barrels. “For us, in the purest approach, a mechanical timepiece is hand wound,” continued Mr. Forsey. “Yet, for the striking side, it encourages the collector to wear the piece because when he does so…he can keep the piece winding as he’s moving throughout the day.”

So this is a seven-figure grande sonnerie that is meant to be worn. To be clear: only a handful of chiming watches have ever been made with automatic winding. Sonnerie/repeater movements require a lot of space and an automatic winding system hogs up most of it. Not to mention, the jarring everyday movements and extremely complicated mechanisms parked just a few millimeters away do not make good bedfellows. So this is a rare combination, to be sure. And to help keep track of the amount of power remaining, a reserve de sonnerie indication is on hand, as well.

To keep things “exciting,” Messer’s Greubel and Forsey decided to work in their 24-second, 25°-inclined tourbillon into the mix. And since the Greubel Forsey uses asymmetric case architecture, the extra-long cathedral gongs (for that extra quality of sound) literally had to go around the case which meant curving around the tourbillon cage, as well. Indeed, there is not a lot of extra room left inside the case.

The Greubel Forsey Grande Sonnerie is the first Greubel Forsey watch to incorporate a platinum winding weight, or what is more popularly known as a rotor.

Best of all, despite the inclusion of the inclined tourbillon, which is included in the total part-count of 935 parts, the Grande Sonnerie’s titanium case is only a millimeter thicker than the company’s own 24 Seconds Tourbillon Contemporain. And that translates to a case 43.5 mm in diameter, and 16.13 mm in height, for a total difference in thickness of only 0.93 mm. Yes, that height is substantial but is made wearable thanks to the lightness of the titanium.

And as if all of that weren’t already enough, the Greubel Forsey still has a couple more tricks up its sleeve. As any watch nerd worth his salt already knows a low power reserve when a chime is about to initiate is a disaster waiting to happen. Try to imagine this scenario with the Greubel Forsey Grande Sonnerie and its 935 parts including an extremely complex and fragile chiming complication: a chime is in progress and the user winds the Grande Sonnerie because power is running low. The result is a staggering repair bill that nobody wants.

Fortunately, that includes Greubel Forsey, which is why the inventors/watchmakers were gracious enough to get around this problem by incorporating as many as eleven security features into the Grande Sonnerie. “Normally a striking watch, when its striking, you do not touch the winding crown to make a setting,” said Mr. Forsey. “With the Greubel Forsey Grande Sonnerie we have a security measure isolating that hand-setting feature so that (the watch) is in the winding position all the time.”

Naturally, the Greubel Forsey Grande Sonnerie showcases the expertise of the company watchmakers and in-house movement finishers. Thus, the movement side of the watch is a sight to behold.

It should also be noted that the Greubel Forsey Grande Sonnerie is not a limited edition but considering the complexity of the mechanism, expect only five to eight pieces to be made every year.