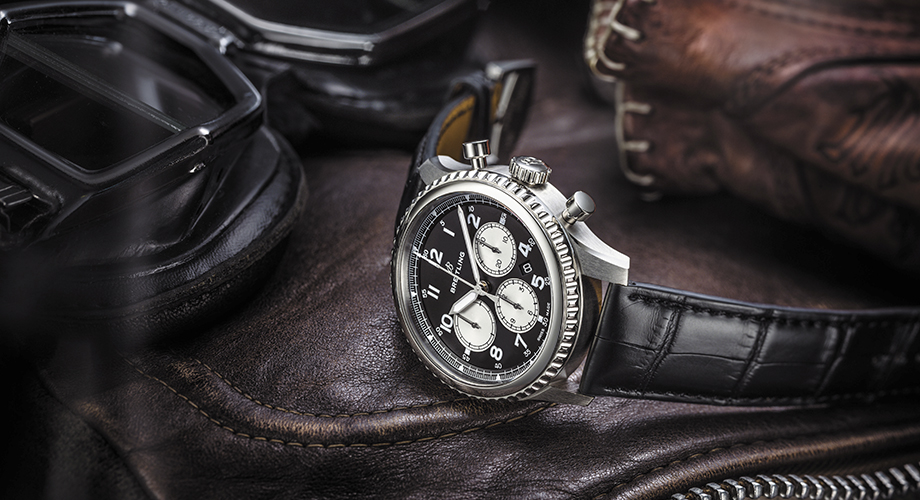 Breitling is most famous for its chronographs and its strong link to aviation. But that wasn’t always the case. True, Willy Breitling never denied the fact that chronographs were a major source of revenue for his brand, but it was only after his success with the two-push piece chronograph in 1934, that Breitling wanted a model that would define the brand as a leader in mechanical chronograph design and production.

Breitling found his answer when a chronograph he designed with a black dial and luminescent numerals and hands became an instant success with the aviation community in 1936. This “aviation-centric” chronograph was obviously the turning point in the brand’s history, and it was because of its success that Breitling founded the Huit Aviation Department in 1938.

His timing couldn’t have been better: the instruments coming out of the Breitling Huit Aviation Department were a success with military aviators, solidifying the company as an aviation pioneer in the run-up to World War II. One such military aviator was the Royal Air Force, which placed a large order of onboard chronographs for all their legendary fighter planes.

These instruments would eventually lead to the Navitimer, the brand’s signature chronograph with an aviator’s circular slide-rule bezel that has been “flying” the horological skies since 1952.

Recently acquired by CVC Capital Partners, the newly re-energized Breitling is finally acknowledging their indelible connection with the Huit Aviation Department with the introduction of the new Breitling Navitimer 8, the brand’s newest collection that meld’s Breitling’s most famous flyer with Huit Aviation’s DNA.

Breitling created the dedicated department in response to the strict guidelines required for military and civilian aviation. This is why Breitling chose the word “Huit,” which is French for the number eight, to reflect the eight-day power reserves of the company’s instruments.

Naturally, this meant an evolution of the iconic Navitimer design, which translated into a collection of watches that replaces the Navitimer’s “busy” circular slide-rule with the more streamlined aesthetic of the Huit Aviation Department’s onboard clocks and instruments.

These five new models offer a compelling blend of sportiness and elegance, and have cases with typical notches on the bezel, contrasting satin and polished surfaces, and artfully shaped lugs. Other features include typography inspired by the first pilot’s watch models including the Reference 768, the small triangles and long minute markers in the railway minute tracks that recall some of Breitling’s great early wristwatch models; as do the luminescent skeletonized hour and minute hands, with the latter’s length matched precisely to the dial’s indexing; and the new bidirectional rotating bezels, the slanted design of which, allows light to be reflected on it emphasizing its subtle but bold design.

The first of the Navitimer 8 collection is the Navitimer 8 Automatic, a simple 41 mm three-hander with a date complication at 6 o’clock clearly descended from Breitling’s iconic watches from the 30s and 40s. Hot on its heels is the 41 mm Navitimer 8 Day and Date, which adds a day of the week display to the date. Both watches are powered by the Breitling Caliber 45 with a bidirectional winding rotor and over 40 hours of power reserve.

The line’s “bread and butter” models include the Navitimer 8 Chronograph with the COSC-certified Breitling Caliber 13 chronometer movement and a 43 mm case in DLC-coated stainless steel; the Navitimer 8 Unitime, an automatic wristwatch offering world-time indication via an ingenious independent hour hand adjusted by the crown and powered by the Breitling Manufacture Caliber B35 with a bidirectional ball-bearing rotor and two spring barrels for a power reserve of more than 70 hours; and the top-of-the-line Navitimer 8 B01, a 43 mm COSC-certified chronometer in steel powered by the in-house Breitling Manufacture Caliber 01 with a ratchet-wheel chronograph with vertical coupling;

“With the Navitimer 8,” says George Kern, Breitling CEO and former Richemont executive, “we are honoring not only our rich heritage but also our pioneering role in building chronographic instruments. But while the Navitimer 8 pays tribute to our past, it also does something considerably more important. It opens the door to a very exciting future.”

GS gets a new heart for Seiko’s 140th