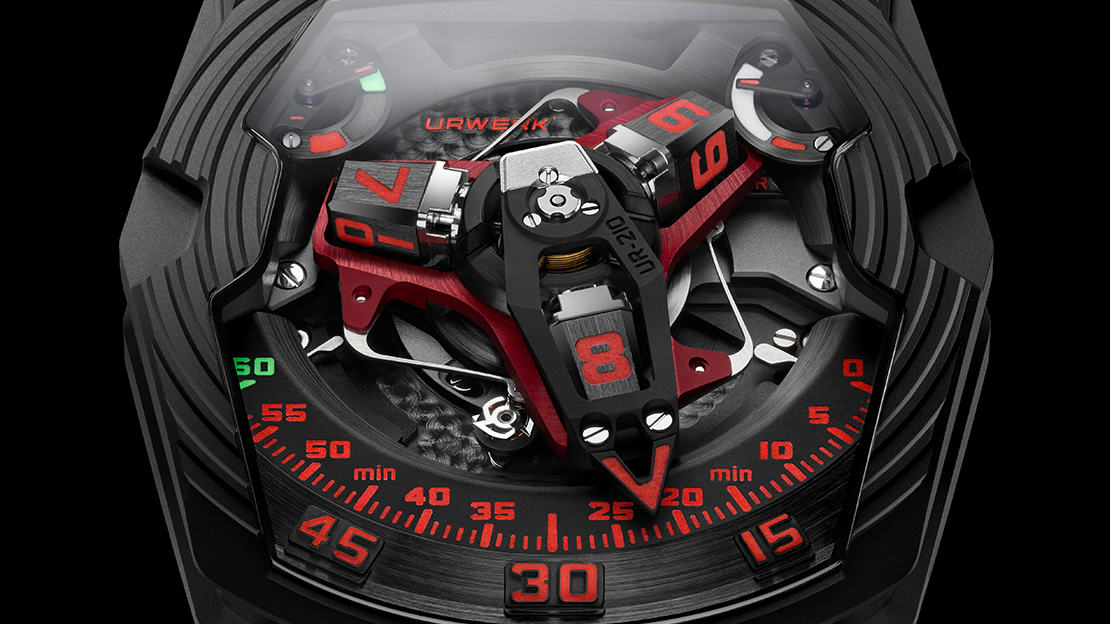 When the UR-210 made its bows back in 2012, it was considered one of the great “unobtainables” in watchmaking.  This was due to the simple fact that most of horology’s greatest achievements: the tourbillon, the minute repeater, etc., were all dreamed up in the candle-lit workshops of the nineteenth century.  With the UR-210, the brilliantly mad scientists of Baumgartner and Frei, collectively known as URWERK, gave us something actually new: a world-first, and something truly original.

But what initially sets the UR-210 apart is its spectacular combination of the brand’s iconic revolving satellite complication and an unconventional flyback three-dimensional retrograde minutes hand.

Machined to the hundredth of a millimeter in aluminum, this minutes hand acts like a cowl to enclose the satellite hours as it travels the hour-long length of the minutes arc and has the uncommon dimensions of 22.29 mm x 8.03 mm x 7.3 mm while weighing only 0.302 grams.

As soon as the 60th minute ends, this high-tech minutes hand snaps back to its starting point with lightning speed, discarding the previous satellite module to enclose the next satellite hour and begin its hour-long journey all over again.  A star-shaped, double coaxial cam, along with a central hub that turns on ruby bearings ensures that this flyback action is possible.

The case of the URWERK’s latest and definitely most exclusive version of the UR-210 undoubtedly reflects this action.  Made of platinum with a black PVD coating, the 43.8 mm X 53.6 mm X 17.8 mm case of the new and irresistible UR-210 Black Platinum looks even more arresting than usual and has a series of shock waves radiating from the dial.

“We’ve added an extra tactile dimension to a 3D watch,” explained Martin Frei, URWERK’s co-founder and designer.  “The rotations of the hours satellites are replicated in the metal of the case.  As if we had created a shockwave powerful enough to displace matter and bend platinum.  The deep furrowed arcs also accentuate the smart hexagonal design of the case.”

To be precise: the winding efficiency indicator calculates the difference between the consumed and generated energy of the mainspring.  When the UR-210 is sitting idle, the indicator will lean towards the red zone meaning the watch is not being wound enough and is, thus, running on stored energy.

However, if the UR-210 is being used during energetic physical activity, the indicator will start pointing towards the green zone, a sure sign that the watch is vigorously being replenished with new energy.  Armed with the knowledge of both the winding efficiency and available power reserve, the owner is thus now able to intervene with the winding efficiency SELECTOR on the caseback.

Labeled REDUCED, FULL and STOP, the selector essentially allows the user to decide how sensitive the rotor is.  Designed to function with an air turbine compressor mounted on ruby bearings, the selector/compressor combo creates internal resistance to produce enough friction to slow down or dampen the automatic winding rotor.

Thus, if the UR-210 indicates an alarmingly low supply of energy, the owner can opt to position the winding efficiency selector to “FULL,” allowing the rotor to convert even the slightest movement into stored energy.  Once a more vigorous level of activity is attained, the user can opt for the “REDUCED” setting.

Large, heavy and gloriously mechanical, the latest and greatest UR-210 Black Platinum is an URWERK classic that just keeps on giving.  Best of all, this newest version is limited to only 25 pieces and is, thus, the most select and exclusive UR-210 made yet.