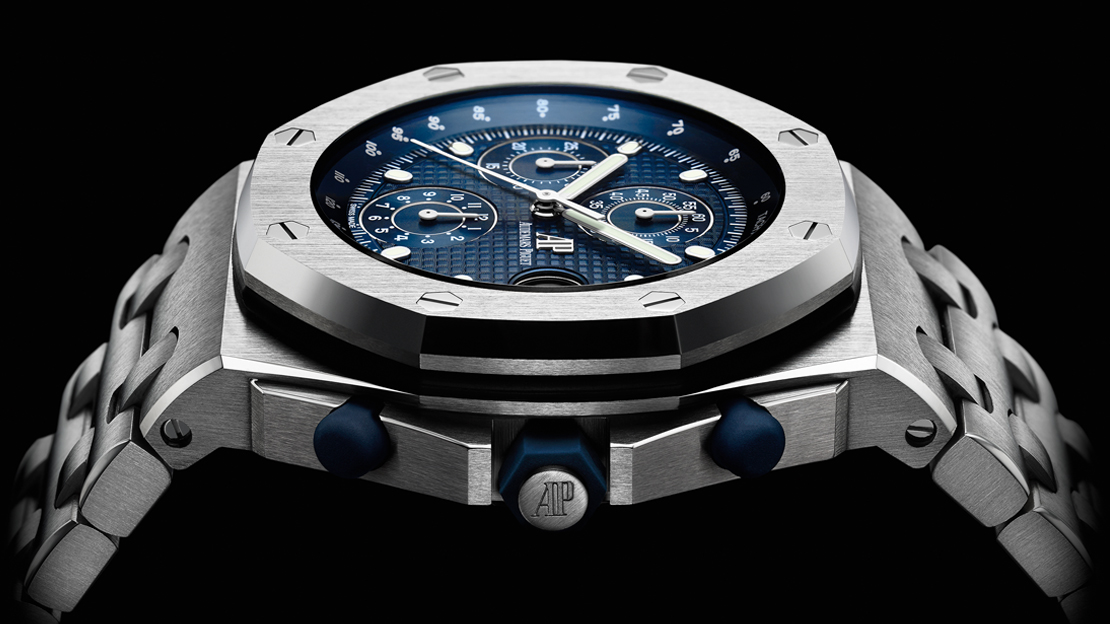 It’s hard to believe that in its relatively short life of “only” 25 years Audemars Piguet’s iconic oversized luxury sports watch, the Royal Oak Offshore (ROO), has spawned an almost endless number of models and variations.  So prevalent had the ROO ingrained itself into mainstream consciousness that, every year, Audemars Piguet presents the latest additions to the Royal Oak and Royal Oak Offshore collections, each more extreme than the last.

The brainchild of maverick designer Emmanuel Gueit, the Royal Oak Offshore made its infamous debut at the 1993 Basel Watch Fair to decidedly mixed reviews.  Literally causing jaws to drop, the ROO represented a complete departure from the genteel ultra-slim metro-sexuality that was the Royal Oak.

Why Emmanuel Gueit felt the need to ‘tweak’ Gerald Genta’s Royal Oak masterpiece into a bigger and badder version that is the ROO is anyone’s guess but his dedication paid off and the titanic-for-its-time 42 mm Royal Oak Offshore was born in 1993.  The rest, as they say, is history and just as the original Royal Oak is credited with creating the Luxury Sports Watch category in 1972, so too can the Royal Oak Offshore be credited with creating the OVERSIZED Sports Luxury Watch in 1993.

Which is why to celebrate 25 years of the Royal Oak Offshore, the Vallée de Joux’s last remaining family-owned watch brand has launched two commemorative pieces to celebrate the modern icon.

The first is the retro-inspired Ref. 26237ST, a literal 2018 re-edition of the original 1993 Royal Oak Offshore.  Thus, the Royal Oak Offshore Chronograph Re-Edition 25th Anniversary remains faithful to the original with its 42 mm stainless steel case, its blue rubber crown and pushpieces, and its signature blue dial with ‘Petite Tapisserie’ pattern.

The original rubber crown and pushers in blue are back replacing the ceramic crown and pushers of recent versions of the ROO.  The caseback mimics the original as well and sports a “plain” stainless steel caseback engraved with the “Royal Oak Offshore” logo in the center with the word “AUTOMATIC” beneath it.  Even the signature integrated steel bracelet is unchanged, with one exception: the blade-like clasp made from a thin layer of steel has made way for a very modern “butterfly” folding clasp, which can only be a good thing.

Replacing the original JLC-based calibre 2226/2840 with a Dubois-Depraz module, however, is the well-known, self-winding, in-house calibre 3126/3840, which incorporates 25 years of horological upgrades and improvements.  It oscillates at 3Hz and boasts 50 hours of power reserve courtesy of 22K gold rotor.

The second commemorative piece is the complex, architectural, and gloriously aggressive, Royal Oak Offshore Tourbillon Chronograph 25th Anniversary Ref. 26421ST and 26421OR, which is the spiritual and literal opposite of the first commemorative edition.

Designed specifically to look to the future of the ROO, the watchmakers from Le Brassus have come out with two distinctly non-vintage 45mm models, one in stainless steel and another in 18K rose gold, that literally re-imagines the ROO Tourbillon Chronograph, and limited them to only 50 pieces each.

This means the barrel-shaped case with integrated lugs are still present, so is the octagonal bezel, the massive black rubber gasket between the case and bezel, as well as the large protection piece to guard the crown.  In fact, there is simply no mistaking these watches for anything other than Royal Oak Offshores.

However, while the signature exposed hexagonal screws on the bezel were previously used to seal the case, they now serve a completely different purpose and are now positioned under the sapphire crystal to hold the movement in place within the case.  That’s right, an exposed movement appears to be “floating” inside the case to replace the dial.

And as a commemorative piece that celebrates 25 years of an enduring icon, that’s something.