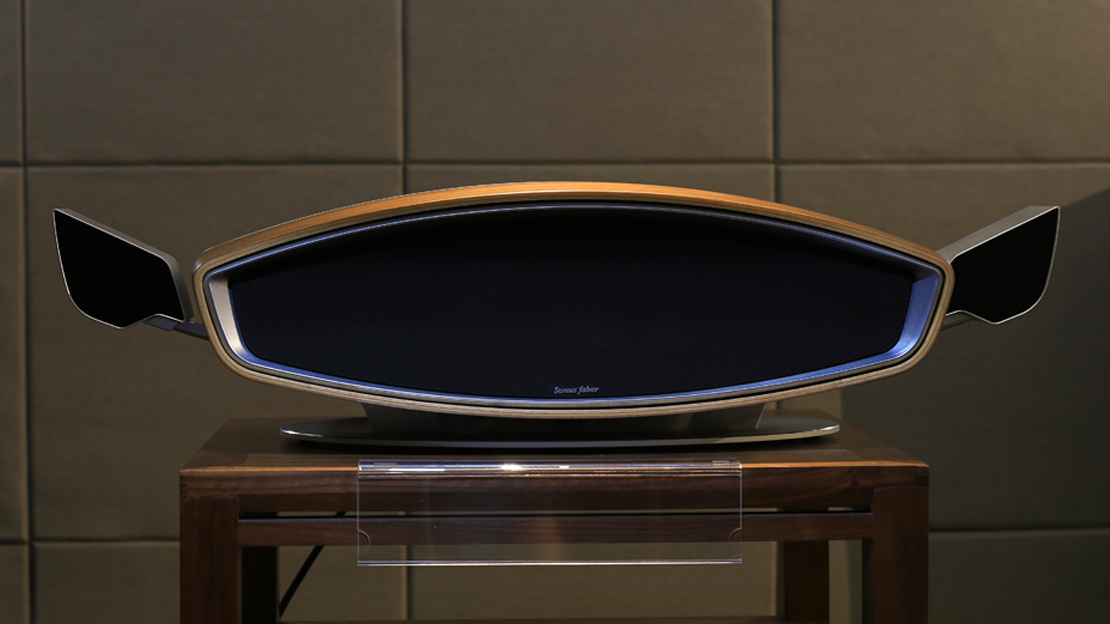 The first time I saw the Sonus Faber SF16, I really didn’t know what it was until it started playing beautiful music. The styling was out of this world and definitely a sight unseen in the world of audio. I thought it was inspired by the Millenium Falcon or a TIE fighter from a galaxy far far away. Sad to say, the designer wasn’t Star Wars inspired but the inspiration was actually taken from the brand’s vintage “Snail” speaker system circa 1980. Like many Italian designed products, the SF16 can hold its own for its beauty with truly functional merits. Press the power button and two satellite speakers extend, a bright white light comes on from beneath like a magical doorway to audio heaven. Call it a beautiful piece of furniture or a work of art, either way; it is a wireless music player with 1400 watts of class D amplification.

The construction and workmanship is just amazing. The main body is made of wood and aluminum defiantly lute shaped. Inside the main body, it is comprised of two aluminum/magnesium alloy 5” woofer cones firing front to back that handle the low frequencies. The two satellite speakers which are enclosed in aluminum consist of four tweeters and four ceramic midrange drivers. For a more immersive sound, both tweeters and midrange drivers are on a front to back configuration too. The lucky owner will get spoiled the minute the unit is turned on. The futuristic looking wings extend out exposing the satellite speakers that can then be extended in two stages. The extending arms aren’t purely for mere aesthetics. The sound becomes more open and less boxy the farther the satellite speakers are extended out of the main body. True to form, the iconic design from the original Snail speaker lives on!

Don’t let the homage inspired beauty underestimate its built-in high technology gizmos. The SF16 is capable of wireless streaming yet there are optical and coaxial digital inputs as well as analog RCA inputs if the need requires. For wireless streaming, the SF16 is compatible with DTS Play-Fi over any WIFI network and is also DLNA compatible. Supported files include Mp3, M4A, AAC, lossless FLAC and WAV files. High resolution audio of up to 24-bit/192kHz is also supported. If you’re in the league of Mark Zuckerberg or Elon Musk, up to eight Sonus Faber SF16s can be connected to create a wireless multi-room system capable of ear-popping watts of power.

I did my audition mainly on a wired CD player. I felt that the lower resolution Spotify streaming wasn’t giving the SF16 any justice at all. To be honest, this is a unit specifically suited for a certain genre of music. Rock and Pop listeners may find it a little lacking in the bass department especially when situated in large rooms. Mind you, the unit was just unboxed a week ago and hasn’t broken in yet so take my opinion with this in mind. Out of the box, the Sonus Faber SF16 sounds wonderful enough with classical, jazz and audiophile vocals. Classical music took on a very refined approach with stringed instruments producing an “au naturel” sound. Think of it as a mini Sonus Faber Guarneri speaker with warmth and involvement to boot. Though most of the SF16s will be played as background music in a living room, the SF16 still offered good imaging and layering. In typical Sonus Faber “house” sound, instruments are produced very convincingly and its presence somewhat palpable. Timbre is still top notch in usual Sonus Faber fashion.

There is no question that speakers of this nature will tend to have its sonic limitations. First, it has to conform to the original Snail’s dimensions. Secondly, it is confined to a certain layout. Understanding its sonic limitations meant appreciating its design and functionality extremities. Its low production numbers of only 200 units a year coupled with superb craftsmanship more than justifies its asking price. Its desirability lies with its well sculpted lines and (only time will tell) its timeless design. There are quite a few expensive speakers that come to mind that are absolutely as beautifully crafted as the SF16 but there are none that offered a complete system. No clutter, no wires and all-inclusive high end electronics. The listener is only required to provide a source (turntable or a cd player)! It is art and electronics rolled into one. This artistically crafted speaker system will look spectacular on any living room. It is a speaker system that offers the best of both worlds; sight and sound.