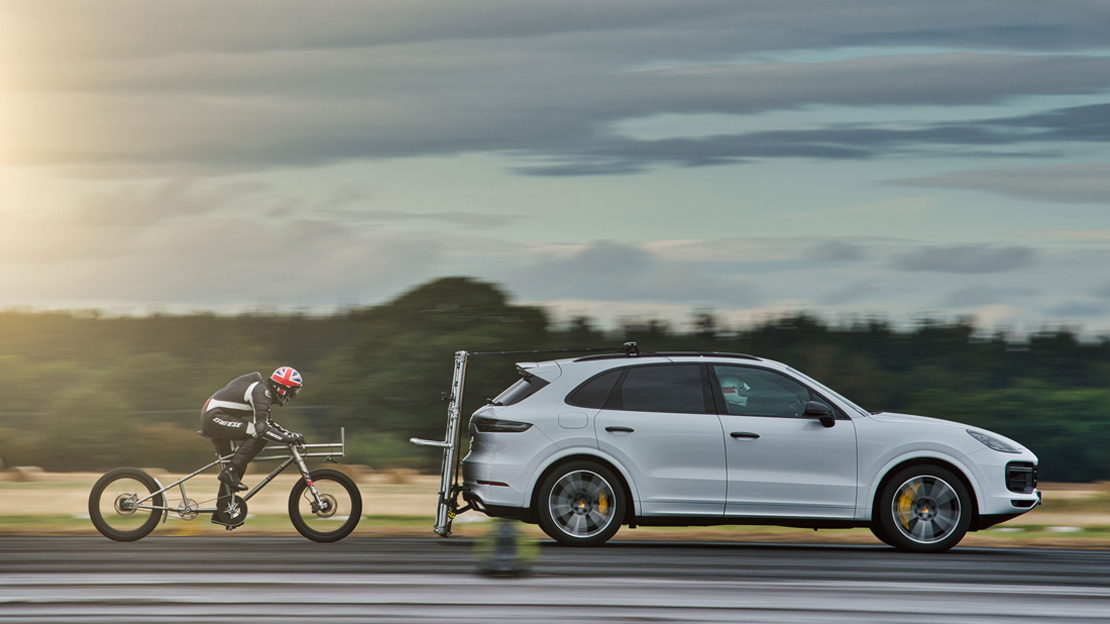 It was one of the most unusual Porsches ever — a Le Mans-winning 935 Turbo Martini with what appears to be the windshield of a bullet train strapped over its rear window and boot. It was the pace car used for a cycling speed record attempt, of course, which nearly ended badly had it not been for the cyclist’s skill (the bike’s rear tire blew up).

Nearly 40 years later, another Porsche has again been instrumental in setting a new motor-paced cycling record. This time around the attempt was successful, and the Porsche used to pace it was more conventional.

In June cyclist Neil Campbell, following Jean-Claude Rude’s attempt behind the 935 Turbo Martini, used the slipstream provided by a Porsche Cayenne Turbo to set the European motor-paced cycling record with a speed of 217.26kph, besting his own benchmark.

Campbell rode a bicycle specifically created for the purpose by British brand Moss Bikes. Looking more like a long — really long — mountain bike than a road bike, it was designed from a mix of carbon-fiber and 3D-printed parts, making it tough and stable even at speeds of around 320kph. It was also fitted with gear ratios and tires meant for high-velocity riding.

As it turned out, equally suited to the record-breaking ride was the Cayenne Turbo. This is because, unlike Rude’s attempt, which was held at Volkswagen’s expansive Ehra-Lessien test track, Campbell’s speed run took place on a runway just a little over three kilometers long. This meant he needed a car that’s large enough to provide cover for him and his bicycle, and yet be quick enough off the line, lest both the car and Campbell run out of road to set a speed record. That car should also have ample power as it needed to overcome the drag produced by a rig mounted on its tailgate, on which Campbell’s bicycle was strapped, and which served as a sort of a wall that cocooned Campbell from the airflow.

Obviously, the Cayenne Turbo proved to be more than up for the task at hand. Thanks to a turbocharged, 550-hp, 770-Nm, 4.0-liter V8 the car could accelerate from a standstill to 100kph in a scant 4.1 seconds and on to 160kph in just a little over nine seconds. Its top speed? 285kph. Good, this, as with a rig mounted on its back, acting like a parachute, the Cayenne Turbo needed all that grunt in order to exceed 200kph on the runway.

Given that acceleration was a key in setting the speed record, it was only logical that a drag racing champion — Andy Frost — was recruited to drive the Cayenne Turbo. During the activity, Prost and Campbell had to remain in constant contact to ensure they get the quickest run as possible.

The way the record was set was that the bicycle was towed by the Cayenne Turbo, with Campbell pedaling as well, until both reached speeds of about 177kph. At that point, Campbell disengaged from the car and pedaled even more furiously to reach a record speed. After passing through the speed traps, Campbell faced another challenge: He had to brake as hard as he could, else he runs out of runway.

“We’ve got so little space that it was essential that we got up to speed as quickly as possible. The acceleration of the Cayenne was incredible — it was like being strapped to a rocket. I was pedaling throughout, harder and harder, before I released from the car at just over 170kph and got my head down and gave it all I could. All the time the Cayenne was right ahead of me, clearing the air,” Campbell said after setting the European motor-paced cycling record.

His next target? The world record, of course. And chances are it’s still going to be the Cayenne Turbo which will clear the path for him.