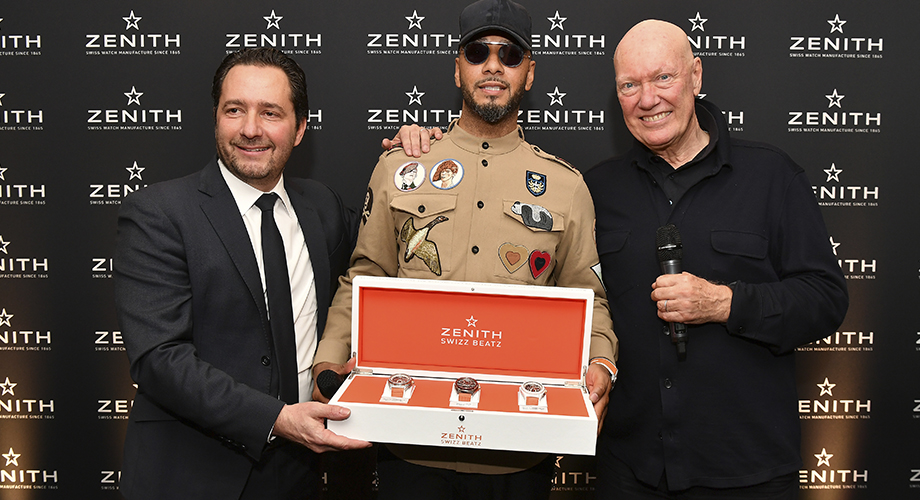 The brand with a guiding star is creating nothing short of a galactic explosion in the watchmaking universe with the launch of a whole new dimension in mechanical precision!

Such was the thrust of ZENITH’s Baselworld 2018 kickoff press conference on March  21″, hosted  by the President of the  LVMH Watch Division, Jean-Claude Biver; ZENITH CEO, Julien Tornare; and attended  by friends of the brand including recording artist and producer, Swizz Beatz, along with the well-known photographer, biker and enfant terrible, Dimitri Coste.

The event was held on the booth which has evolved in a new and more design forward direction.Visitors were immediately struck by a bold  outsized visual of the Defy El Primero 21 movement featuring dark  modern tones evoking  the  new collection and the brand’s fresh future-driven momentum. In addition, a dedicated Defy Room invited them to enter an extremely dark universe featuring six portholes with a fast-rotating mechanism creating luminous graphics.For anyone approaching to within 1.5 metres, the sequence stops and one of the six different models thus presented lights up to become clearly visible in startling detail. This powerful sensory experience instils a distinctively dynamic and on-trend atmosphere that sets an effective stage for these charismatic and resolutely upbeat timepieces. The Defy Room sound track has been specially designed by Swizz Beatz to match  the resolutely experimental, contemporary urban atmosphere of this Baselworld must-see.

Emphasising the brand ‘s new beginnings, Julien Tornare said:  “ZENITH  has been bringing style and substance to the wrists of watchmaking cognoscenti all over the world for more than 150 years. In the third millennium, based on this same DNA, but with renewed energy, the brand has blazed the trail for fascinating new vistas in time measurement with the launch of the Defy El Primero 21 and the Defy  Lab. The former opened up the world of hundredth of a second timing, a quantum leap in terms of performance and engineering, impressively combining the historic heritage of Zenith with the future of watchmaking; while the latter, winner of the Innovation Prize at the 2017 Grand Prix d’Horlogerie de Geneve, challenged the very foundations of traditional watchmaking with the most accurate mechanical watch ever  made.”

H e continued: “In  2018, we continue to reach for the stars. Leveraging the entrepreneurial spirit so firmly entrenched in our brand, the focus is firmly on expanding on our iconic Defy and Pilot collections. This year, the futuristic DNA of the DEFY line will appear in a full-fledged collection featuring several degrees of mechanical complexity, ranging from three-hand to Grand Complication models. While the three-hand plus date Defy Classic in ultra-light titanium propels casual chic elegance into a whole new dimension, the new Defy Zero G defies the laws of gravity with its downsized and optimised gyroscopic ‘Gravity Control’ module, in the first embodiment of futuristic Haute Horlogerie fans of pilot watches can also look forward to a number of new iterations of our highly popular PILOT Type 20 watches. These include a relaunch of the PILOT Type 20 Chronograph Ton Up as well as a new special edition that is the latest result of our partnership with cult cigar brand Cohiba.”