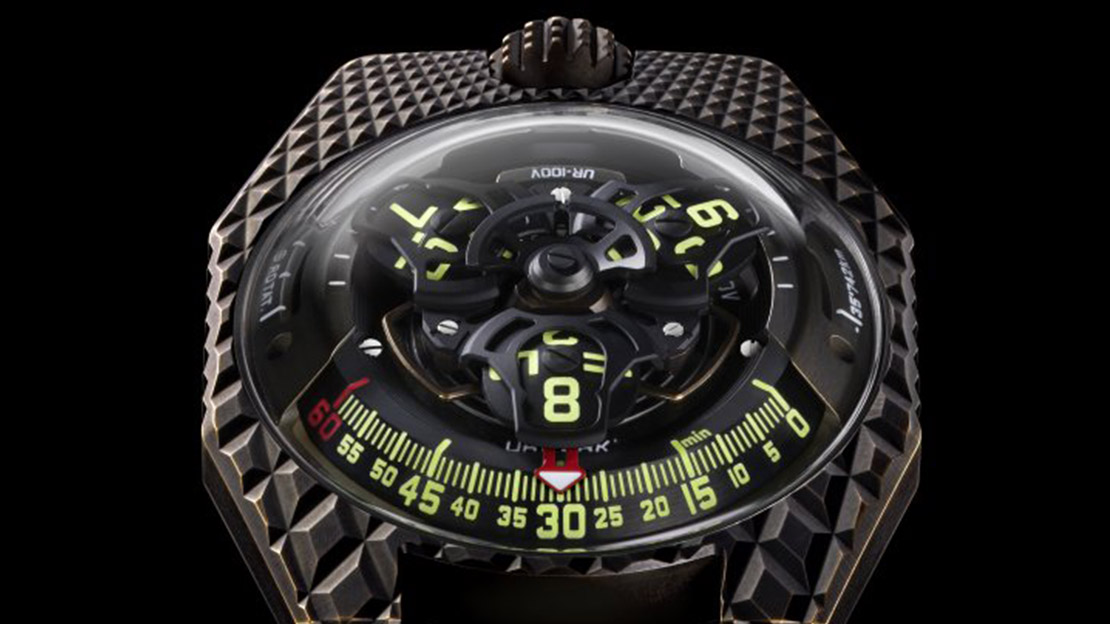 This latest release carries both Urwerk’s genome in its satellite hours and that of its namesake in the texture of its reinforced bronze case. This primal finish acts as a perfect foil to the modernity of this time-telling device. Yet, both elements meld into a cohesive timepiece that sits beautifully on the wrist and makes for a good topic of conversation.

The 41-mm UR-100V T-Rex features satellite wandering hours and a new type of self-winding system. However, its hide, in a mosaic of scales, has a somewhat more sensual texture. Its case is in sold bronze that has undergone three successive treatments. The first lies in the unusual composition of the alloy which results in a delicate patina. The bronze is then subjected to a controlled milling station that carves the pattern of the scales on the top and sides of the case. The final processes, sand-blasting and Urwerk’s proprietary method of biochemical burnishing, give the watch its distinctive color.

The machine responsible for indicating the time is the UR 12.02 with a self-winding system governed by the Windfänger turbine and planetary gearing. Three satellites, each carrying four hours, rotate on a three-armed carousel. In turn, each satellite carries a red pointer along a 60-minute scale. The regular orbit of the hours replicates the planetary dance in miniature scale. The watch is wound while you wear it by a rotor. This is coupled to a device called the Windfänger that is specific to the UR-100 models. It’s a planetary gear that limits the action of the rotor to avoid overwinding and excessive wear.

Finally, the UR-100V T-Rex has a feature that puts other watches into the dinosaur age. Once the red pointer of the satellite hours has completed its 60-minute journey, it reappears to show the distance travelled by our planet. In the scale at 9 o’clock on the case, the pointer shows the 555.5 km travelled by a point on the equator in a period of 20 minutes. The 20-minute scale on the other side of the dial shows the 35,742 km the Earth travels in its orbit around the sun in that time.

The Urwerk UR-100V T-Rex comes in a limited edition of only 22 pieces.