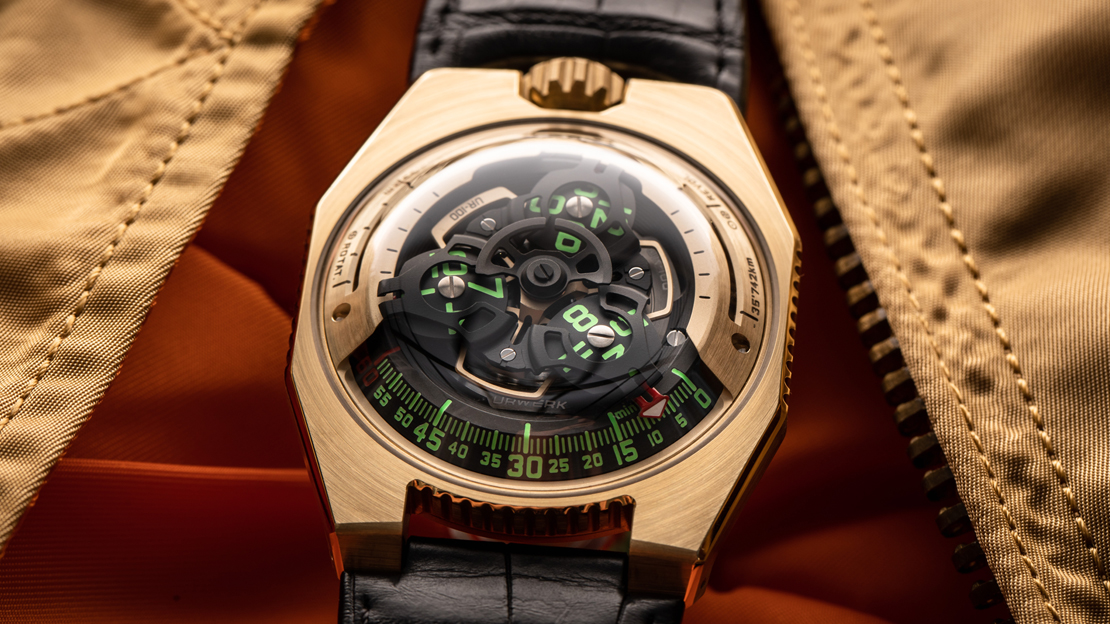 The previous version of the Urwerk UR-100 was finished in Gunmetal and that piece reminds me of an F-22 Raptor or even a Tie Fighter from the world of Star Wars. If we continue with the Star Wars saga analogies, then I’d have to agree with Urwerk Co-founder Martin Frei that the new UR-100 in 2N yellow gold evokes memories of C-3PO, the Jar Jar Binks of droids in the Star Wars franchise. I say that in jest because despite “Threepio’s” often irritating demeanor, he is a beloved character that has appeared in all nine movies that make up the 3 trilogies of the epic sci-fi saga. Unlike Jar jar Binks who was disposed of after one movie.

The UR-100 is the latest timepiece that was borne out of the creative minds of the rebel presents a tangible representation of the relationships between time and space and along the way, gives us an insight into the minds of the designers. For instance, Martin Frei says that “science fiction has been an inexhaustible source of inspiration because he has been a sci-fi geek since childhood.” That coupled with the fact that his father was an engineer who worked on some interesting projects including the Apollo Lunar Rover.

Differentiating this UR-100 from the previous three versions is the case which is cut from a solid block of 2N yellow gold, its surface satin-finished to mirror C-3PO’s usual pale shine (save for his uncanny blinding polish during the throne room scene at the end of A Brave New Hope). The rest of the watch finished in the same meticulous manner in which all Urwerk watches are created.

Powering all UR-100s is the UR 12.01 automatic winding system regulated by the proprietary Windfänger system with helical and planetary gearing which regulates the oscillating mass thus protecting the winding system from overloading even during intense motion. The planetary gears add a level of protection by limiting the rotational speed of the rotor to minimize excessive winding and maximizing reliability.

The signature feature of the UR-100 collection remains to be the discreet spacetime indications on each side of the top of the dome’s periphery, which are both essential for intergalactic voyages and unique on planet earth. After each of the three red minute arrowheads pass the numeral 60 they disappear and then reappear again on two separate kilometer scales. The first display at 9 o’clock marks the 555 km traveled along the equator during 20 minutes of the earth’s rotation, the second display at 3 o’clock indicates the distance – 35,740 kilometers – traveled by the earth as it orbits the around the sun over 20 minutes.

Last but perhaps the highlight of the UR-100 Gold edition launch is that the very first piece (referred to as “Fight C-19”) of the only 25 watches that will be made will be auctioned off on the 8th of May at 4pm Geneva time with all proceeds slated to be distributed to organizations battling the COVID-19 pandemic.

URWERK will select which organizations fighting against Covid-19 in partnership with the successful bidder of the No. 1 gold UR-100 “Fight C-19”. For more information and/or to participate in the auction, please visit link: https://bit.ly/2xn9uAf