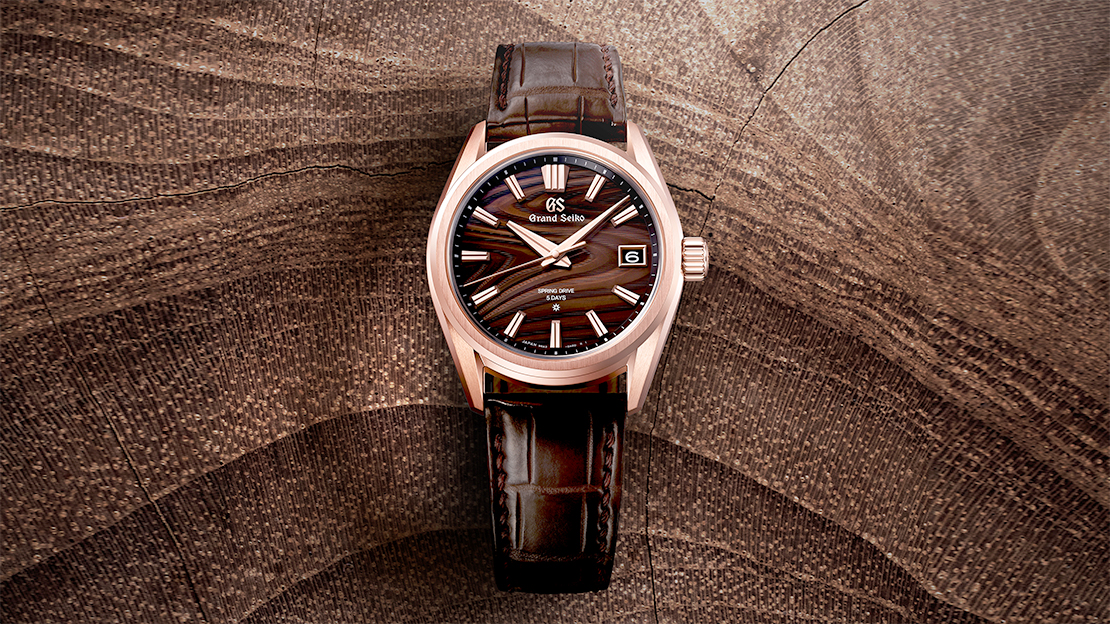 In February 2021, Grand Seiko introduced a high-beat watch whose dial design incorporated a series of delicate lines that echoed the intricate nature of tree-rings. This watch celebrated the 140th anniversary of the company’s founding and won high praise from watch fans worldwide thanks to the organic feel of the dial and the powerful yet understated charm of the overall design. Today, a new creation with the same distinctive dial and case design powered by a new Spring Drive movement, Caliber 9RA2, joins the celebration of the anniversary of the company’s founding.

The watch is powered by the new Grand Seiko Spring Drive 5 Days Caliber 9RA2, which inherits all the performance characteristics of the Spring Drive Caliber 9RA5 introduced last year in celebration of the 60th anniversary of Grand Seiko. The new setting of the watch hands and the power reserve indicator moved to the movement’s back gives the watch a slender and elegant feel upon observation of the dial and enhances the dial’s exquisite craftwork signature to Grand Seiko.

The understated charm and beauty of the movement is revealed for the first time through the sapphire crystal case back and captures the uniquely Japanese aesthetic for which Grand Seiko is renowned. The delicate texture of the movement’s finish reflects the frost that winter brings to the forests in Shinshu where all Spring Drive watches are made. The bridge lines and hole edges are diamond-cut to reflect light from all angles and the jewels and tempered blue power reserve indicator add a quiet sparkle that is a delight to behold.

A slim Spring Drive movement with power and strength.

Caliber 9RA2 allows the new timepiece to be slimmer than any other current automatic Spring Drive creation. The movement achieves its slimness thanks to the re-design and re-positioning of the Magic Lever. This Offset Magic Lever is positioned away from the center of the movement to reduce its thickness. The new setting of the hands also contributes to the slender profile of the watch.

The movement may be slim but it has enhanced rigidity and shock resistance thanks to the new layout of the gear train towards the center of the movement and the One-Piece Center Bridge that holds them together.

Caliber 9RA2 incorporates two barrels, one larger and one smaller, that deliver a power reserve of up to 120 hours. The ±10 seconds per month accuracy rate is made possible by a new IC with a built-in temperature sensor, and to the selection of highly stable quartz oscillators that have gone through a three-month aging process. The quartz oscillator and temperature sensor are vacuum-sealed into a single package to eliminate even the slightest temperature difference between the two to maintain the watch’s accuracy at the highest possible level.

The dial delights the eye with its organic feel and brings to life Grand Seiko’s philosophy of the Nature of Time. The miniscule but visible variations in the dial’s depth reveal the subtlety of the dark and light tones of the wood grain. The brown tone of the dial perfectly matches the 18k rose gold case to give the watch a gentle and warm feel.

The watch’s design is true to the Grand Seiko Style defined back in 1967 with the celebrated 44GS but its heritage is combined with a contemporary feel that perfectly expresses the quiet but strong character of Grand Seiko. Its powerful hands and grooved, prominent markers ensure perfect legibility. The Zaratsu polished, distortion-free mirror finish and the delicate hairline finish alternate on the case to create a quiet and harmonious glow. As is Grand Seiko’s tradition, the star mark at six o’clock indicates that the indexes are solid gold, as are the GS letters, the calendar frame and the clasp. The hour hand is large in volume and crafted to align exactly with the grooved and prominent hour markers, enhancing the legibility of the time.

The watch will be available as a limited edition of 140 at the Grand Seiko Boutiques and selected Grand Seiko retailers worldwide in November 2021.