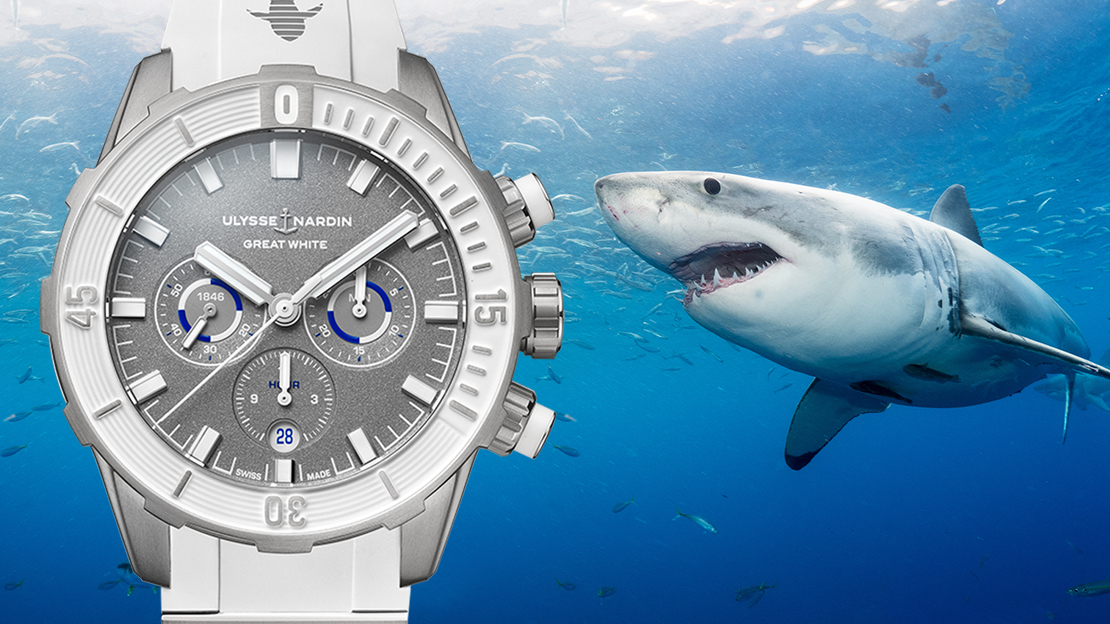 In honour of Shark Week and celebrating the launch of its new DIVER CHRONO GREAT WHITE, the Swiss watchmaking Maison raises its devotion to shark conservation around the world to the next level. Ulysse Nardin – a brand that has always had sharks on its radar – proudly announces its increasing support of a new fleet of shark conservation initiatives and partners:

• Donating 1% FOR THE PLANET, pledging to donate 1% of annual sales of all “shark watches” to support non-profit organizations focused on sharks.
• Partnering with SHARKTRUST, the leading European shark conservation charity actively working to reform unsustainable and unmanaged fisheries and the supply chain that drive the global consumption of shark products, through legislation and effective conservation actions.
• And adding a new friend of the brand to the family – a new “Ulysses”- MIKE COOTS, a Hawaii native who became an amputee when he lost his right leg in a tiger shark attack at 18 years old while bodyboarding. Mike soon realized the importance of preservation and has since become an advocate for saving sharks in an effort to maintain balance in the ecosystem.

Shark week – With their status as the apex predators of the sea and as a largely misunderstood species of marine life, sharks are the avatars and cherished icons of Ulysse Nardin. These majestic top predators are essential to the natural order of marine ecosystems. Currently their most severe menace is from overfishing, and many species are threatened with extinction. Sharks have been an irreplaceable resource for coastal communities in the developing world for centuries. Currently, this unique balance is in danger of being lost forever. Ulysse Nardin is dedicated to the conservation of sharks, one of the emblems of the iconic Swiss watch manufacturer.

A quick Shark retrospective at Ulysse Nardin:
2010 The very first Ulysse Nardin DIVER Hammerhead shark watch was created.
2018 The shark becomes a Ulysse Nardin emblem and the brand’s advertising campaign signature.
2018 Launch of the DIVER GREAT WHITE watch, rapidly sold-out.
2019 Launch of the DIVER BLUE SHARK model.
2020 The brand starts a SHARK TAGGING campaign with non-invasive techniques thanks to its partnership with the Acores University and the work of free diver Fred Buyle and PhD Doctor Jorge Fontes.
2020 Ulysse Nardin partners with the US based OCEARCH organization, a fascinating, shark-tracking app. Ocearch aims to share knowledge about “the links between shark, human and environmental health.”
2020 A young adult female Great White was caught and tagged off the coast of Massachusetts and named Andromache becoming ULYSSE NARDIN’s first official shark ambassador. She can be tracked through OCEARCH here: https://www.ocearch.org/tracker/detail/andromache
2021 Launch of the DIVER LEMON SHARK timepiece with the Florida International University.
2022 The latest edition to the Ulysse Nardin’s diver collection, the DIVER CHRONOGRAPH GREAT WHITE comes to the surface in titanium and withstands 300 meters depth, in a limited edition of 300 pieces.
2022 The brand partners with SHARKTRUST, 1% FOR THE PLANET and Mike Coots.

Driver Chronograph 44mm Great White Limited Edition
The new Diver 44mm chronograph has a sandblasted and satin-finish titanium case and displays a white, unidirectional, rotating, rubberized bezel. A contemporary and functional model designed specifically for the deep, it is a technical marvel fitted with the Caliber UN-150 self-winding movement; the watch works thanks to revolutionary Silicium technology, pioneered by Ulysse Nardin at its headquarters in Le Locle, Switzerland. It features a 30 minute counter, a 12-hour counter and a small second counter with date, escapement wheel, anchor & balance spring in Silicium. Touches of blue and white decorate the grey dial. The lettering “GREAT WHITE” appears below the Ulysse Nardin logo. And the silhouette of the animal is the key signature of the white rubber strap – while the grey of the dial is reminiscent of shark skin. The concave bezel with a domed sapphire glass creates a sleek look designed for those who consider exploring the depths of the ocean a personal challenge. Engineered to withstand 300-meter depth, the new diver watch is designed to inhabit the undersea environment right alongside its namesake. The Diver Chronograph 44mm Limited Edition Great White follows a long tradition of shark-named diver watches including a women’s Great White Diver launched in 2019. It is available in a limited series of just 300 pieces. 1% of the revenues from sales of this watch will be donated to the planet to support via non-profit organizations focused on sharks.