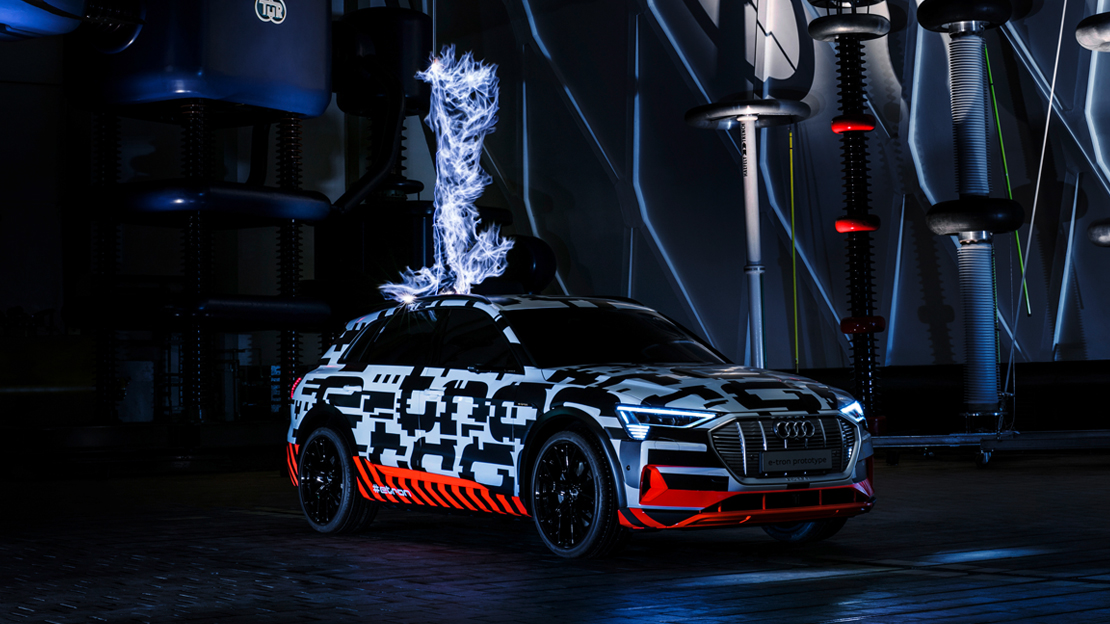 The production version of the Audi e-tron prototype heralds the dawn of a new era for the brand with the four rings: The company is transforming from a classic carmaker to a systems supplier for mobility offering its customers tailored solutions for charging, whether at home or on the move. The production version of the Audi e-tron prototype is the first car on the market that can charge at charging stations with up to 150 kW. In barely 30 minutes, the electric SUV is then ready to set off on the next long stage of its journey. Its large lithium-ion  battery provides for a range of more than 400 kilometers (248.5 mi) in the WLTP driving cycle.

The scenario: dancing lights and pulsating crackling over the car’s roof
The Faraday cage at the Siemens high-voltage test bay in the Berlin switchgear plant measures 42 x 32 by 25 meters (137.8 x 105.0 x 82 ft). A team of electricians and engineers at the world’s largest switchgear production facility is researching lightning impulse voltages of up to three million volts. Built in 1958, the parabolic hall houses an impulse voltage generator the size of a house. And the Audi e–tron prototype is right on the middle of it. Flashes of light dance with a pulsating crackle over the car’s roof, lighting up the 25 meter (82.0 ft) high hall. The experts have aimed a flashover voltage at the car. This experiment symbolizes something that people have been dreaming of for thousands of years: to capture lightning bolts and use their energy. Even today you can’t use a lightning bolt to charge an electric car, but the engineers have come a step closer to realizing the vision of lightning–fast charging. The production version of the Audi e-tron prototype is the first car on the market that can be charged with up to 150 kW.

Charging on the move: with up to 150 kW at high-power charging stations
At high–power charging stations using the European charging standard Combined Charging System (CCS), such as those in the Ionity network, the Audi e–tron prototype is ready to set off on the next long–distance stage of its journey in less than 30 minutes. The key feature behind this is the sophisticated thermal management system for the lithium–ion battery. Located in the vehicle floor, it stores 95 kWh of energy to provide a range of over 400 kilometers (248.5 mi) in the realistic WLTP test cycle. The SUV offers full everyday usability. By the end of 2018, there will be nearly 200 of these high–power charging (HPC) stations with six charging points each. Plans call for 400 locations at intervals of 120 kilometers (74.6 mi) along highways and main transport routes by 2020.

In addition to fast charging with direct current, the electric SUV can also be charged on the move with alternating current at AC chargers, with up to 11 kW standard and optionally with 22 kW. All together, customers can use more than 65,000 public charging stations throughout Europe. Their number will increase significantly in the years ahead. At market launch, Audi will provide e-tron customers simplified access to roughly 80 percent of these charging stations with a proprietary charging service. Whether it’s AC or DC, 11 kW or 150 kW – just one card is all customers need to start the charging process. Customers have to register one time on the myAudi portal and conclude an individual charging contract. Billing is automatic and requires no physical form of payment. The procedure will become even more convenient with the function Plug & Charge, which is set to debut in 2019. A card will no longer be needed – the car authorizes itself and unlocks the charging station.

Longer trips can be planned either in the myAudi app or directly in the car. In both cases the customer is shown the appropriate route with the required charging points. The navigation system considers not only the battery’s charge but also the traffic situation and includes the required charging time in its arrival time calculation. DC charging stations and most AC chargers throughout Europe are included.

Charging at home: standard with 11 kW, optionally with 22 kW
Audi offers various solutions for charging at home. If desired, an electrician referred by the local Audi dealer will check which charging options are available in the customer’s garage and install the corresponding technology. The standard mobile charging system can be used in two ways: with a charging power of up to 2.3 kW when connected to a 230 volt household outlet and with up to 11 kW when connected to a 400 volt three–phase outlet. In the latter case, the battery can be fully recharged in roughly 8.5 hours. With the optional connect charging system, charging power doubles to 22 kW provided that the electric SUV is equipped with the required second charger.

Together with a home energy management system, the connect charging system also offers intelligent charging functions. For example, the Audi e–tron prototype can charge with the maximum output possible permitted by the home electrical system and the car while also considering the demand of other consumers in the household.

This prevents overloading of the home electrical system. Furthermore, customers can define their own personal priorities, such as charging when electricity is less expensive. If the home is equipped with a photovoltaic system, the car can be charged preferentially using the electricity generated by the system, and charging even considers forecast phases of sunshine.

The myAudi app provides for convenient operation from the couch. It can be used to plan, control and monitor the charging and pre–heating/–cooling of the electric SUV. Customers can set a departure time, for example, so that the Audi e–tron prototype is charged and/or heated/cooled at the desired time. The app also displays charging and driving data.