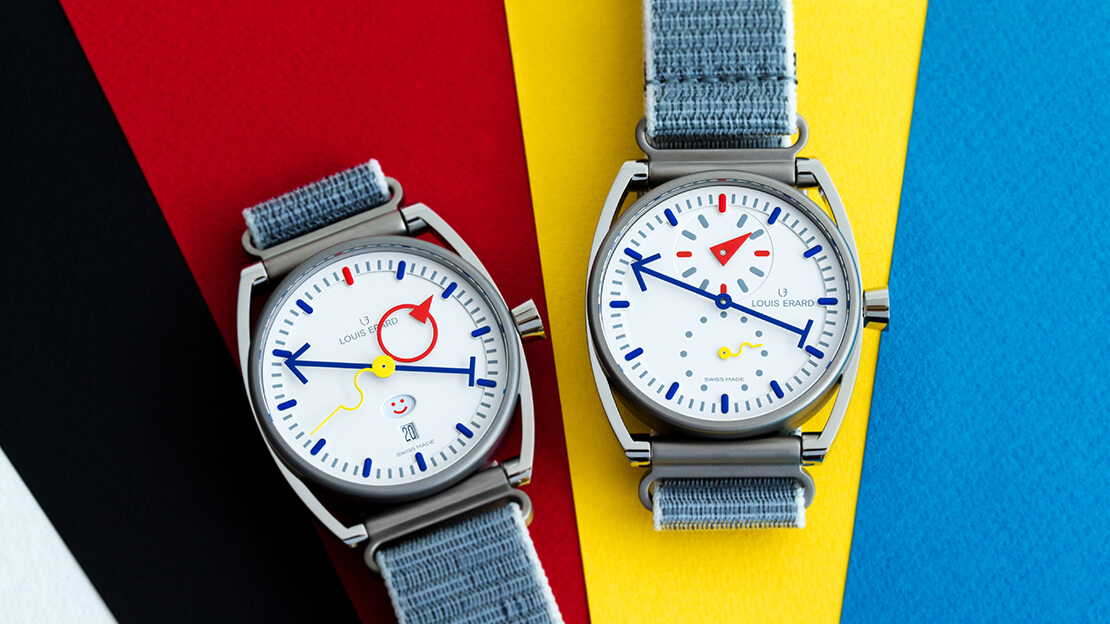 2022, year of the figure two. Couple, duo, tandem. History is written by two, the adventure is lived by two: Louis Erard x Alain Silberstein. Since the pair joined forces, nothing has been the same and it is not likely to stop. Copernican encounter: Two ex machina. Louis Erard was looking for his future while Alain Silberstein was looking for his present. The two times were one and the two destinies were united, inseparable, as at the beginning of a saga.

And the saga continues. Manuel Emch, CEO and artistic director of Louis Erard, has once again invited Alain Silberstein to continue the collaboration started in 2019. The fusion of the two worlds has this time given birth to a diptych. Two mechanical variations: a regulator, an original complication from Louis Erard, and a Smiley weekly calendar, Alain Silberstein’s emblematic calendar — every day has its face, its mood, its humour. A work in two parts, symbolic, allegorical, heraldic.

The two references are produced in a limited series of 178 pieces, a number whose meaning is reinforced from collaboration to collaboration: together we are stronger. Fifty-six watches in a special diptych box set will be available at the exceptional price of CHF 7,777.

The individual sale price is in itself remarkable: CHF 4,000. Entry price on the collector’s watch – the previous chapters of the Louis Erard x Alain Silberstein collaboration have already proven this with a sustained rating on the secondary market. A price that also signs Louis Erard’s profession of faith: to be the access point to exceptional watchmaking, through capsule editions with contemporary creative artists, and special series dedicated to métiers d’art.

Apart from the white dial and the light grey strap, this diptych takes up the exterior elements of the 2021 triptych version – which was sold out as soon as it was released. A case composed of a tubular container in microblasted grade 2 titanium and transparent caseback, fixed on a vertical sidebar called “brancard” in polished grade 5 titanium and flanked by a signature conical crown stamped with the Louis Erard symbol. The strap is made of special nylon, breathable, ergonomic and adjustable for perfect wearing comfort.

Is it still necessary to introduce Alain Silberstein? Artist, designer, watchmaker architect. A pioneer of the creative watch at the end of the 1980s. A leading figure in the fusion of art and watchmaking. Head of independent watchmaking, inveterate risk taker, Alain Silberstein left the circuit too early due to the economic setback of the 2010s but returned to the race through the great door of collaborations and once again has become immensely popular through Louis Erard.

Is it still necessary to introduce Louis Erard watches? Maison du Noirmont, independent by its roots and by vocation. A model of resistance: built in the middle of the Wall Street Crash of 1929, a survivor of all watchmaking crises, faithful to its commitment to fine, affordable traditional watchmaking. Louis Erard would not be the brand we know today without the impetus of Manuel Emch, artistic and strategic director.

This diptych tells this double story and concentrates all its energies. Simple and unconventional, like disconcerting evidence. It’s as if the two had lost their heads.