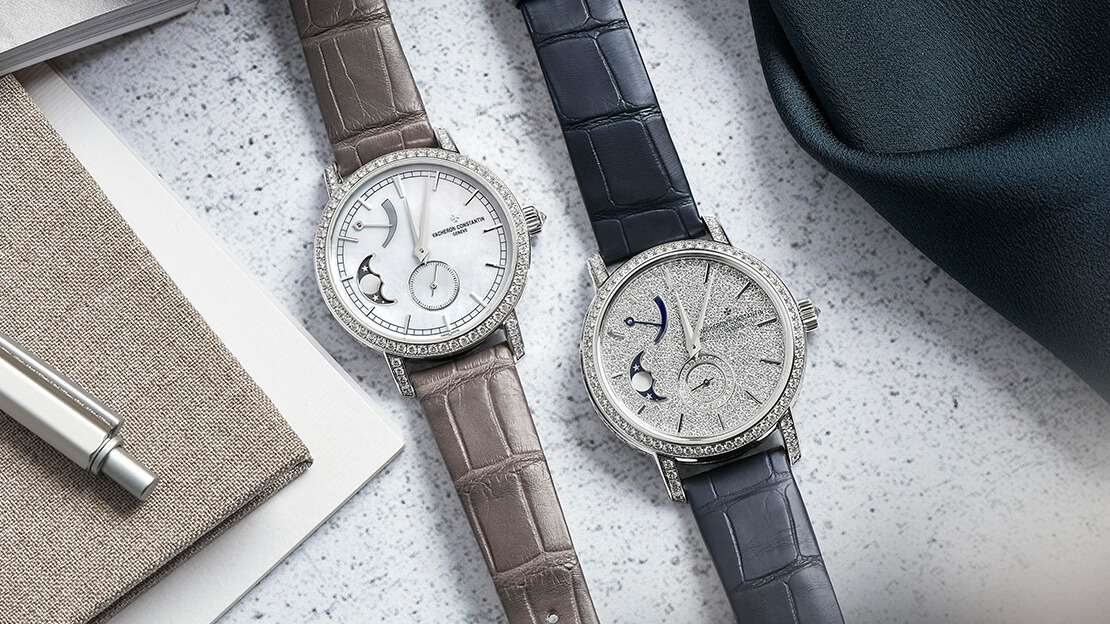 Lit up by snow setting
The Traditionnelle moon phase watch reveals the lunar display through the prism of virtuoso jewellery skills. Entirely paved with diamonds, this bejewelled version of the existing model has been subtly redesigned to ensure perfectly proportioned shapes.

The dial features the snow-setting technique, according to which 548 round-cut diamonds in ten different diameters ranging from 0.7 to 1.5 mm are randomly placed to achieve a striking effect, as if melting seamlessly into the light.

In addition to the paving technique, which requires the skilled and experienced gemsetter to master the available space, the additional difficulty is to successfully bypass the moon phase, follow the curve of the power-reserve indication and integrate the white gold hour-markers. The small seconds counter, features 38 diamonds rimmed by 24 stones to enhance legibility. Prong setting extends to 225 round-cut diamonds totalling approximately 4.8 carats and adorning the bezel, case middle, lugs and crown.

Astronomical moon
As a means of giving depth to the jewellery aesthetic, the designers chose to enhance the rigorous discipline of prong setting and the effervescence of snow setting with two night blue touches. A tinted mother-of-pearl inlay serves as a 40-hour power-reserve indicator, while the moon phases – standing out on a star-studded disc and in the same gold hue as the case with an opaline finish – appear through an aperture between 8 and 9 o’clock.

Driven by the in-house 1410 AS movement, the moon phases are based on 29-day, 12-hour and 45-minute lunar cycles, incorporated into the mechanism in the form of a 135-tooth wheel.

This high-precision moon, also known as the “astronomical moon”, thus displays a variation in rate of just one day every 122 years.

The finishing of the manual-winding movement – circular-grained on the front mainplate and featuring a Côtes de Genève motif adorning the bridges on the reverse side, complete with hand-chamfered edges and straight-grained flanks – can be admired through the sapphire caseback of the watch. Elegance and refinement are expressed all the way to the night blue satin-effect alligator leather strap – interchangeable at the touch of a button and tool-free – fitted with a white gold pin buckle set with 21 round-cut diamonds.

SUM-UP
Entirely paved with diamonds totalling approximately 4.8 carats (minimum guaranteed), the Traditionnelle moon phase watch in white gold has been subtly redesigned to ensure optimal elegance and harmoniously balanced shapes. The dial is graced with dainty snow setting composed of 548 diamonds. The gemsetting continues with 225 round-cut diamonds adorning the bezel, case middle, lugs and crown. Powered by in-house Calibre 1410 AS, this timepiece displays a high-precision moon phase on a star-studded blue disc and requires no correction in 122 years. This same night blue hue is echoed by the mother-of-pearl inlay used to indicate the power reserve and by the interchangeable strap, which can be fitted at the touch of a button and entirely tool-free.