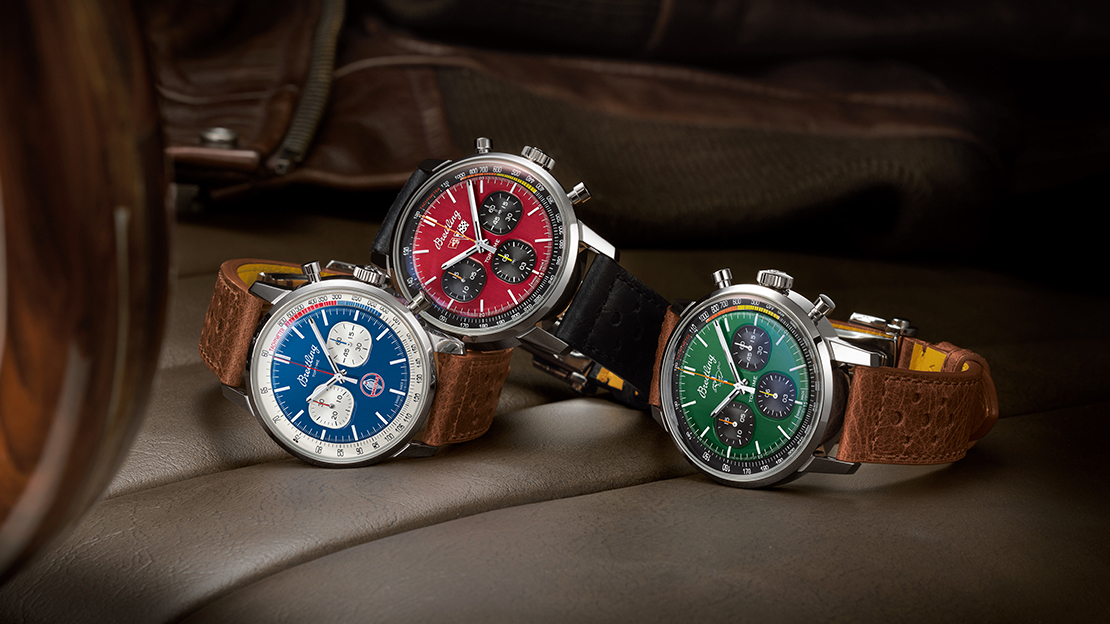 This unconventional trio of racing chronographs draws inspiration from the Chevrolet Corvette, the Ford Mustang, and the Shelby Cobra, three icons of the American car culture. The timepieces themselves are a nod to the original 1960s Breitling Top Time models, which were designed for “young and active professionals”. Today’s modern-retro interpretations are perhaps even more youthful and free-spirited.

“It’s about the journey, not the tempo. And that’s true whether you’re tinkering under the hood or hitting the road for a Sunday ride celebrating these beautiful machines,” says Breitling CEO Georges Kern.

These disruptive chronographs with a motoring twist stand out for their bold dial colors with orange and yellow or red and blue touches and racing-themed watch straps in calfskin leather. Engraved stainless-steel casebacks showcase each car’s logo in impressive detail, and the chronograph pushers punctuate the dial. All three watches are water-resistant up to 10 bar (100 meters).

The range includes the Top Time Chevrolet Corvette in red and black, based on the striking design of the Corvette C2 from the mid-1960s, often referred to as the “Sting Ray” by aficionados. Fun fact: Did you know that carmaker Louis Chevrolet was a Swiss racing driver born in the watchmaking city of La Chaux-de-Fonds? Then there’s the green and brown Top Time Ford Mustang version, inspired by a car developed in record time in 1964, sparking a new genre of compact and affordable sports cars. It soon reached iconic status at the hands of rock stars and Hollywood actors and also played an iconic role on the silver screen. Last but not least there’s the Top Time Shelby Cobra version in blue and brown. Our mood board for this watch revolved around the formidable machine created by the iconic American race-car driver and manufacturer Carroll Shelby for 1960s competitions, which mixed classic British chassis design with American racing ingenuity and engineering. The watch hints at one of its distinctive paint jobs: blue with white racing stripes.

The 42 mm cases of the Chevrolet Corvette and Ford Mustang versions house the COSC-certified Breitling Caliber 25, a self-winding 1/8th of a second chronograph movement with a power reserve of about 42 hours. Both watches feature a tachymeter scale and three black contrasting subdials. Their dials display the car logos at the 12 o’clock position.

Inside the slightly smaller 40 mm Top Time Shelby Cobra beats the COSC-certified Breitling Caliber 41, a self-winding 1/4th of a second chronograph movement with a power reserve of approximately 42 hours. It has a white tachymeter scale and two white contrasting subdials, plus the Cobra logo at the 6 o’clock position.

But this racing heritage isn’t about rushing around. Instead it’s about a vehicle that delivers a sense of freedom and joy. So much so that you might even lose track of the time.