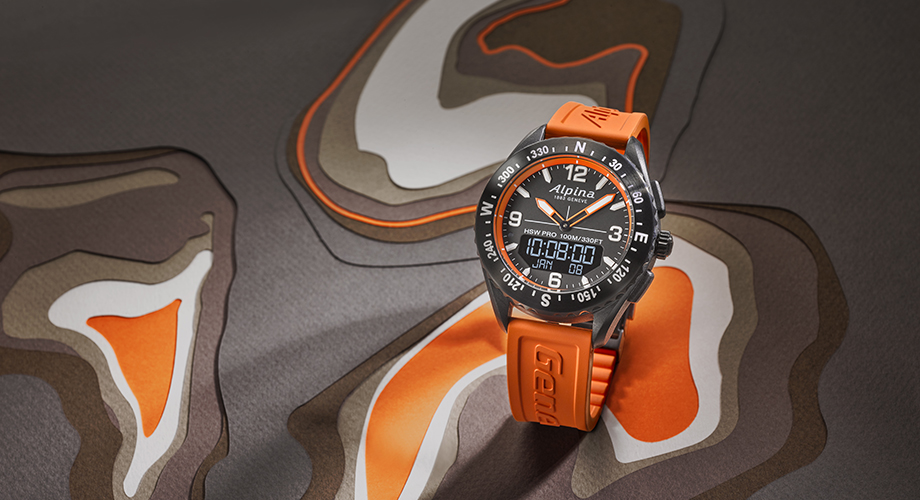 MMT, incidentally, is the company on which Frederique Constant and Alpina have relied for their Smartwatch Modules, as well as supporting apps and other services. Alpina, in launching its new AlpinerX, is not deviating off-course as it sticks to MMT’s wares.

The AlpinerX started out as a Kickstarter campaign at this year’s Baselworld. Alpina dangled things like giving funders the ability to design and spec the watch — the brand set up a configurator for this — as well as interacted with them through comment boxes and live streams. The result? More than 3,000 watches were ordered, with funds exceeding CHF1.5 million. Four variants of the AlpinerX are now available worldwide.

The AlpinerX uses five sensors to measure UV index, temperature, altitude, air pressure and wind direction. Its functions are split into Environment, Body, and Time & Notification. Included in Environment are an altimeter, barometer, compass, UV index indicator, thermometer and a connected GPS. Body takes care of sleep data, a host of “coaching” programs based on results, and smart alarms. Time & Notification keeps track of time recording options and time zones, and saves data to a cloud. Going by this list, it’s clear the AlpinerX is meant for an active lifestyle.

Accessing the AlpinerX’s functions is done via MMT-developed systems, like the AlpinerX app that’s compatible with both iOS and Android. The AlpinerX records and displays all data it gets, then stores these — accessible, of course — in MMT’s new SwissConnect Cloud Portal. This cloud-based data service is perfect for Alpina’s growing line of connected timepieces, whose users can log on to the SwissConnect website to get apps, data, widgets and dedicated dashboards for the AlpinerX (and other Alpina smartwatches). SwissConnect Analytics also promises to support future apps.

As well as being seriously tech-savvy, the AlpinerX is quite outdoorsy, too. Its battery can last for up to two years, its case is made of fiberglass, and it is both shock- and water-resistant, making it light but tough. Which means it promises to be suitable for any type of activity.

The AlpinerX is as much a smartwatch as it is a jock’s watch.