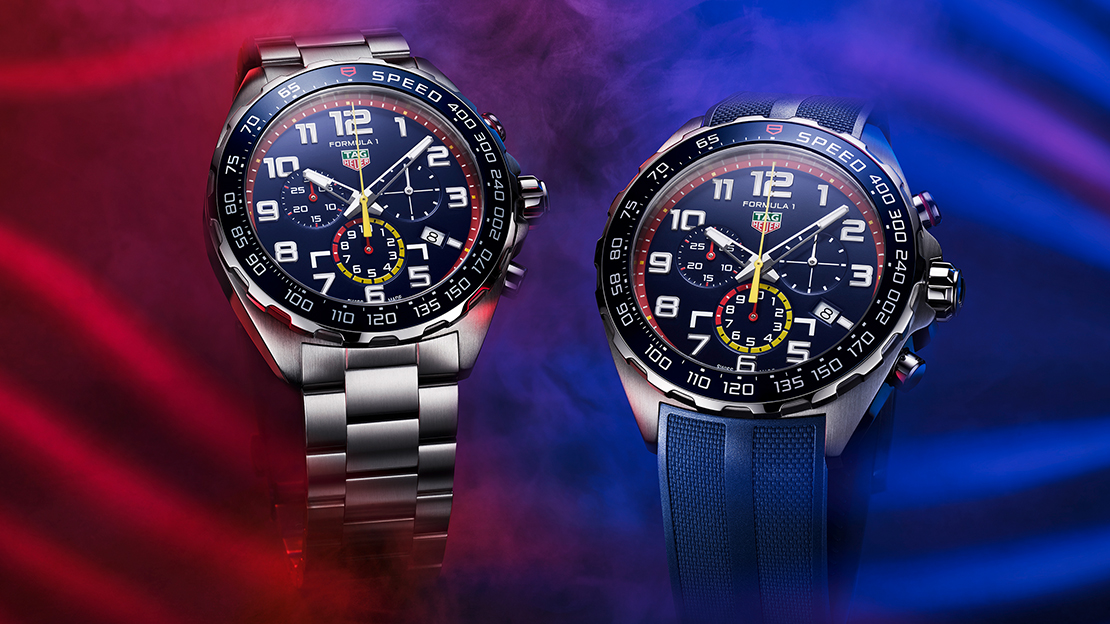 While creating this special edition, the designers at TAG Heuer worked closely with the Red Bull Racing team to co-create this unique timepiece using all the graphic codes of the Formula 1 Team.

For this new version, the designers highlighted the bold colours of the Red Bull Racing Team, such as the mythical dark blue and striking red tones. The new blue sun-brushed dial with a customised minuterie featuring vibrant yellow and red touches is the perfect example of this. The 1/10th second chronograph counter at 6 o’clock has also yellow and red details and the chronograph central second hand is highlighted in yellow.

The Arabic numeral indexes are directly inspired by racing car speedometers and the Formula 1 connoisseurs will also notice the subtle reference to their favourite sport in the form of a line above the 5 and 7 numerals. The line is designed to evoke the starting line of a Formula 1 track. The new dial is also inspired by Formula 1 car cockpits and is highly legible to make the time easy to read in all conditions.

To complete this bold racing design the TAG Heuer Formula 1 Red Bull Racing Special Edition has round pushers painted with a red lacquer outline to highlight the chronograph start pusher at 2 o’clock. A special bezel is engraved with the word “SPEED” a term which perfectly symbolises Formula 1’s quest for ultimate performance.

The TAG Heuer Formula 1 Red Bull Racing Special Edition is available in two different watch versions, one with a stainless-steel bracelet and one with a blue rubber strap, offering the choice between a sporty look thanks to the rubber strap or a more elegant appearance thanks to the stainless-steel bracelet. The caseback of the watch is also engraved with the words “RED BULL RACING FORMULA ONE TEAM SPECIAL EDITION”.

With this new creation, TAG Heuer confirms its strong links to the team of the 2021 World Drivers’ Champion. Without a doubt, the new TAG Heuer Formula 1 Red Bull Racing Special Edition will certainly be well received by the latest generation of Formula 1 fans – especially Red Bull Racing Team enthusiasts – all over the world.

TAG Heuer Formula 1, the favourite watch collection of Formula 1 fans
The partnership between TAG Heuer and Formula 1 spans decades. It all started with Jack Heuer, a pioneer and a visionary, when he initiated the first Formula 1 sponsorship agreement. Since this first sponsorship contract was signed by Jack Heuer and the Swiss racing driver Jo Siffert in 1968, TAG Heuer’s association with Formula 1 has never faltered.

Thanks to this innovative association many racing drivers began wearing a Heuer, making TAG Heuer the favourite watch brand among Formula 1 drivers. And the story continues to this day with the Red Bull Racing Team: from the drivers and engineers to the team principal, the whole team wears TAG Heuer watches on and off the track.

The TAG Heuer Formula 1 watch collection was specifically created to pay tribute to this extraordinary heritage. In 1986, TAG Heuer launched a new collection exclusively dedicated to Formula 1, and since its release the Formula 1 collection has held a special place in TAG Heuer’s history, becoming one of the brands best-selling collections and embodying its strong passion for the racetrack.

In 2016 TAG Heuer became the official partner and timekeeper of the Red Bull Racing Formula 1 Team and accompanied all the race winning moments of the team up until Max Verstappen’s outstanding victory in the final race of the 2021 season to win the World Drivers’ Championship. TAG Heuer will continue to support the Red Bull Racing Team with the two partners recently announcing the extension of the relationship until 2024.