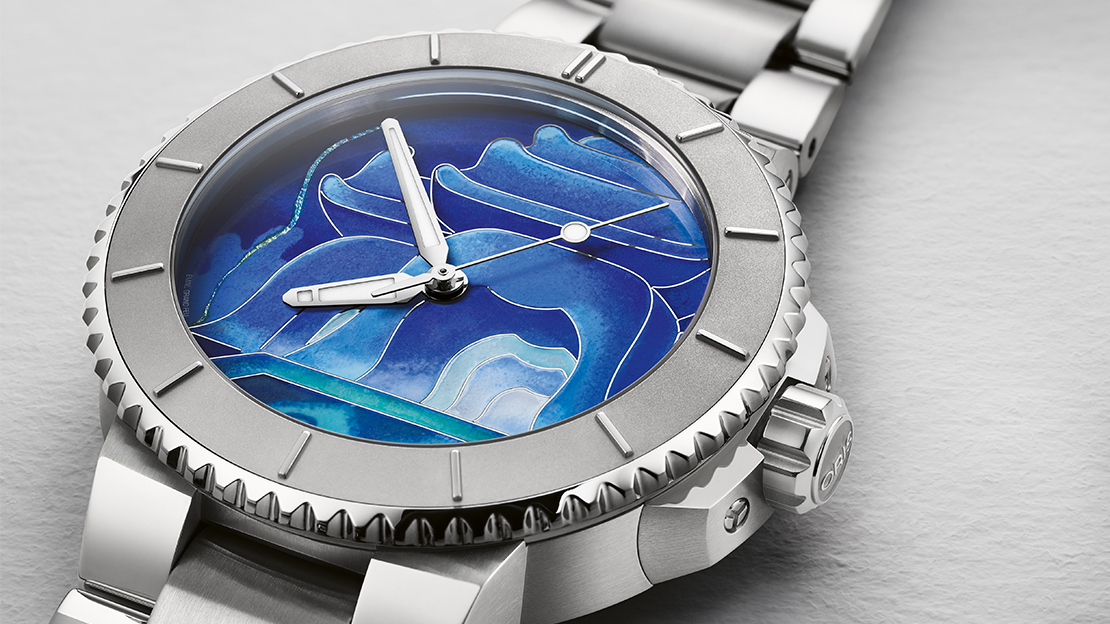 The Sun Wukong Artist Edition features a unique hand-painted cloisonné enamel dial and shows the Dragon King’s underwater palace, where Sun Wukong (more commonly known as The Monkey King) finds a weapon in the seminal 1961 Chinese animated feature-length film The Monkey King: Uproar in Heaven. This exceptional watch will be limited to 72 numbered pieces, reflecting the number of shapes the divine Sun Wukong can appear in. Each is a work of art.

This is the first time Oris has delivered a watch with a cloisonné enamel dial. The technique is a métier d’art, or rare handcraft, and in watchmaking is typically associated with high-end, classical watch companies. The decision to apply it to a version of the hard-wearing Aquis diver’s watch speaks of Oris’s continuing desire to create playful, memorable watches that make people smile.

It follows last year’s 2,000-piece Sun Wukong Limited Edition, also based on the Aquis, which featured a red and gold central seconds hand and a blue dial with a repeating motif capturing the rapid spinning motion of the staff as the Monkey King uses it to defeat his enemies.

The story of Sun Wukong is embedded in Chinese and international culture. The mythical character, who was born from stone and has divine powers, first appeared in the classic novel Journey to the West at the end of the 16th century. The film, which was made during the Second Golden Era of the Chinese film industry, expands his story, recounting how he uses his supernatural powers to acquire a red and gold staff from the Dragon King’s Palace, before rebelling against heaven.

The cloisonné enamel dials are all produced by the same highly skilled Swiss artist. One dial takes up to three days to complete, and each is unique. The process begins when a silver wire is shaped into the outline form on a white-gold plate. This creates ‘cloisons’ or compartments, which are then filled with coloured glass powder and fired in a kiln at around 800°C. The enamel this produces is then polished to give it its shiny, magical finish.

When it came to choosing a movement for the watch, there was only one option – Oris’s five-day, highly anti-magnetic Calibre 400 automatic. A magical mechanical movement for a magical story.