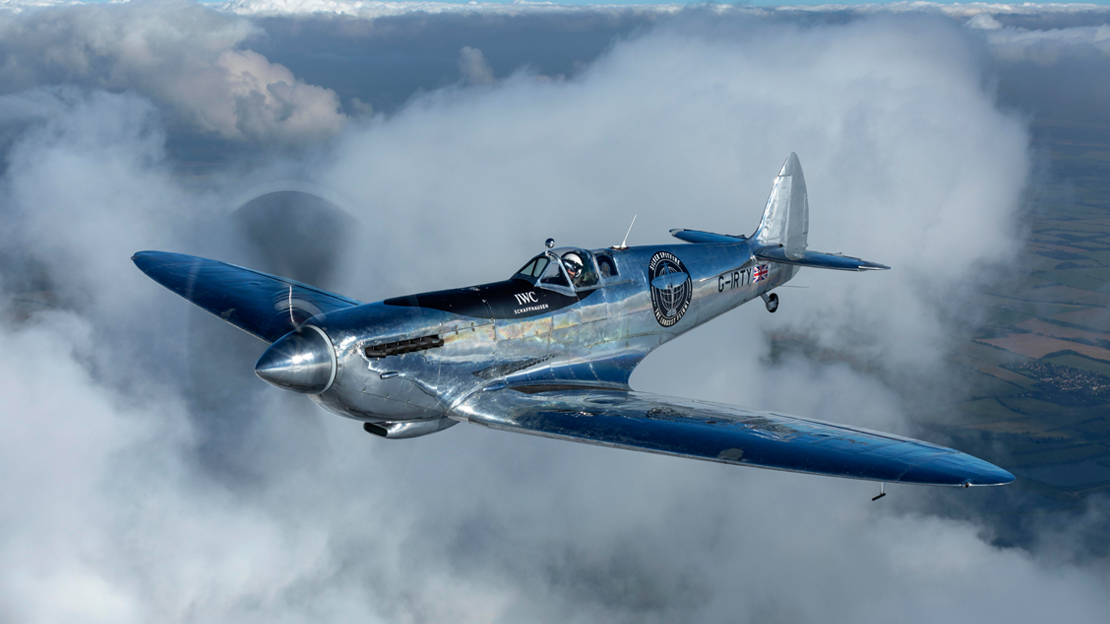 PARKED at the booth — or hangar— of IWC Schaffhausen at this year’s edition of the Salon International de la Haute Horlogerie (SIHH) held in January was the Silver Spitfire. The plane was the centerpiece, a really great stage on which IWC was able to launch the seven latest Spitfire models belonging in its Pilot’s Watches collection. As pairings go, this is right up there with denim jeans and white shirt, whisky and steak.

Getting the Silver Spitfire into the SIHH’s Geneva halls was tricky; MJ271, its historic registration, was not completely done yet. Nevertheless the plane was trucked to the event, along with a second Spitfire — the RR232 “The City of Exeter” — which was just displayed at the Goodwood motoring festival in England. The RR232 was dismantled and painted silver, brought to the show and was used to cover up parts of the Silver Spitfire that were not quite ready yet.

Work on restoring it started two years back. The Silver Spitfire is an actual Vickers Supermarine Spitfire Mx.IX that flew during the Second World War — its MJ271 registration identifies it as having been built in Castle Bromwich, England in 1943. It was not in great shape when it arrived at The Aircraft Restoration Co. in Duxford, England.

The plane had no flying instruments, or even an instrument panel to speak of. Major parts of its hydraulic system were missing. Its undercarriage legs and propeller needed replacing. Bringing back the fuselage and wings to a condition where it could be polished to a dazzling shine most likely was not an easy job, too. The crew at Duxford — around 15 engineers labored over the Spitfire — had to sift through more than 20,000 rivets, making sure each one was serviceable. They wanted to keep the plane’s authenticity largely intact. Because despite the work it needed, the MJ271, it turned out, was quite original. In fact, numerous parts were deemed worthy to be reused.

But in areas where upgrades could be used, the plane got them. Among the sundry stuff were the installation of additional fail-safe radio systems, fuel pumps and vacuum pumps. No big deal, really; these are just back-up systems to ensure the pilots and the plane live if any component fails during a flight. The plane was also fitted with six more fuel tanks, adding to the original two. This meant new pipes, valves and pumps had to come on board, too. The 1,700hp Rolls-Royce Merlin 70 engine was overhauled and certified ready to take 500 flying hours.

“Thanks to the shiny surface of polished aluminum, the beautiful silhouette of this iconic aircraft — with the unmistakable elliptical wings — is visible in its purest form. I am looking forward to the test flights and the start of this unique adventure.”

This “unique adventure” the IWC top gun is referring to is the “Silver Spitfire – The Longest Flight.” In this, IWC and the Boultbee Flight Academy intend the Silver Spitfire to circumnavigate the world, piloted by Matt Jones and Steve Boultbee-Brooks. The flight plan for the propeller-driven plane covers more than 43,000 kilometers, dropping in on some 30 countries along the way. Never has a Spitfire been known to take such a long-haul flight. Throughout this expedition, IWC serves as official timekeeper and main sponsor.

Messrs. Jones and Boultbee-Brooks, owner of Boultbee Flight Academy, the world’s first Spitfire training school and approved Spitfire flight provider, have their hands full now. The two have begun flight testing and over the next couple of weeks will need to familiarize themselves with the aircraft and its behavior in flight. They also want to address any teething trouble before they take off for the first leg of “The Longest Flight” from the Goodwood Aerodrome on August 5.

Because unlike at SIHH, they won’t have the RR232 “The City of Exeter” as a backup this time around.