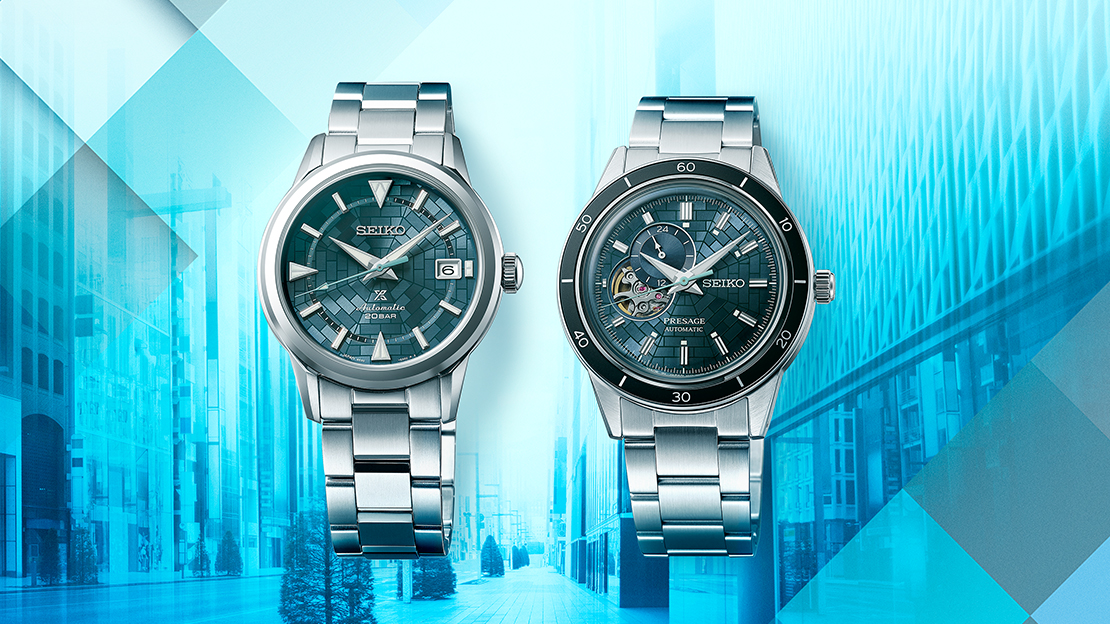 The Ginza district in central Tokyo has a special importance for Seiko. It was where the company’s founder, Kintaro Hattori, opened a shop selling and repairing clocks and watches in1881, when he was just 21 years old and, today, Ginza is still where the company is located. For more than 120 years, a Seiko clock in Ginza has kept Tokyo on time. Today, the Seiko clock looks down on Ginza’s most famous crossroads from the roof of the Wako store where one of the world’s largest Seiko flagship stores is located. Nearby are other Seiko establishments, including the Seiko Museum, a boutique dedicated to Seiko Prospex and Seiko Dream Square, where people can experience each collection’s rich heritage and the unique worldview of Seiko.

In celebration of Seiko’s 140th anniversary and its long association with Ginza, two limited editions are today introduced into the Prospex and Presage collections which capture both the classic and modern faces of Ginza. Both creations have dial patterns that echo the district’s traditional cobblestone streets but are in a blue-gray tone that also evokes the contemporary feel of the many modern and architecturally interesting buildings which define Ginza today. Heritage and modernity. History and progress. These two creations capture the essential characteristics of today’s Seiko.

The Prospex limited edition is based on the modern re-interpretation of the 1959 Alpinist watch introduced earlier this year. The intricate pattern of the dial incorporates two different sunray patterns which, as the viewing angle changes, create ever-changing impressions that capture the texture and feel of Ginza’s cobblestones. The seconds hand pays homage to the district’s history with Komparu, a traditional Japanese color named after Komparu Street, where Ginza’s nightlife was once centered. This blue color with a soft green tone was first used in the middle Meiji era (1868 – 1912), instantly found favor among the many geishas who lived there and then gradually became a popular color among the public.

The watch is powered by Caliber 6R35, which delivers a power reserve of 70 hours. The glass is a curved sapphire crystal that is resistant to scratches and the watch is water resistant to20 bar. It is offered as limited edition of 3,500 and will be available in Seiko Boutiques and selected retail partners worldwide in October 2021.

The Presage creation features the same cobblestone-inspired dial pattern and Komparu color seconds hand, but the watch has the distinguished aspect of the recently released “Style60’s” design series inspired by the 1964 Seiko Crown Chronograph. The box-shaped glass, sharp hands and faceted indexes are inherited directly from the Crown Chronograph and create a retro feel that matches perfectly with the classic dial pattern. The opening at the 9 o’clock position allows the wearer to see and enjoy the beating of the escapement and the 24 hour sub-dial above it offers a different and useful way to tell the time. This Presage watch is offered as a limited edition of 4,000 and will also be available in Seiko Boutiques and selected retail partners worldwide in October 2021.