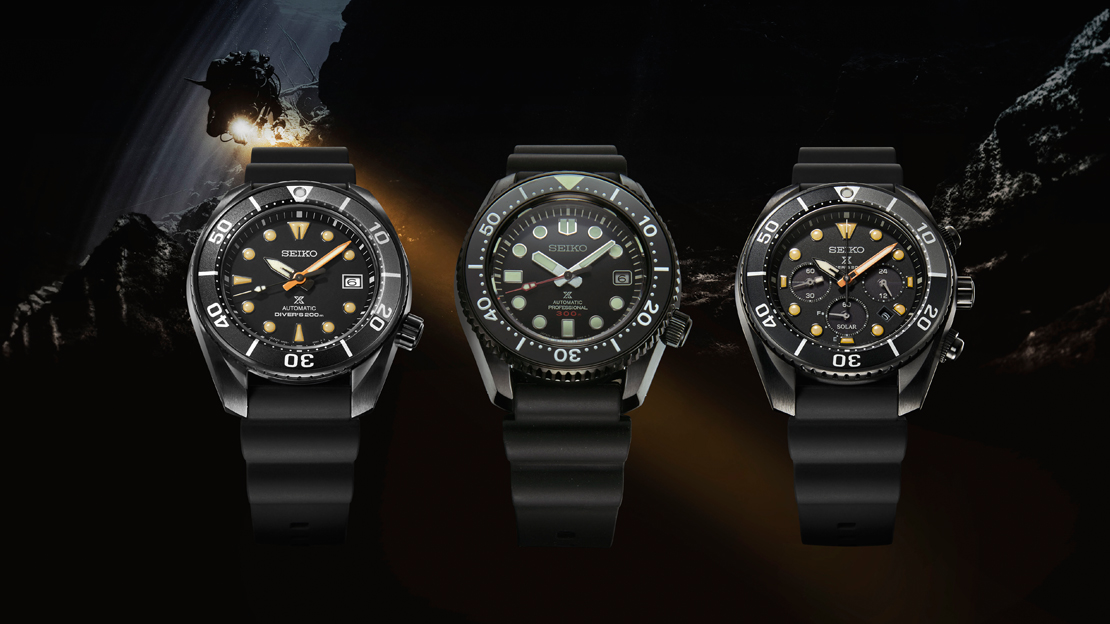 The year 1965 was a banner year for Seiko, as they released their first diver’s watch. The watch was functional and has maintained its popularity through the decades. Divers and non-divers alike seek out the watch, and Seiko has decided to give us a few more options to choose from. And this time, they’ve taken us to the dark side.

The darkness of the night-time sea inspired this new collection of the Seiko Prospex. Diving during the daytime is a thrill in itself – the underwater environment is so fascinating that you might actually find yourself holding your breath for a moment. But there is something even more enticing, and that is diving at night. The contrast is unbelievable and thrill level is even higher. That thrill and excitement amidst the darkness was the inspiration for the limited edition all-black diver’s watches.

Seiko Prospex Black Series Limited Edition SLA035J1
The first watch in this Black Series collection is the all-black with red-accented dial (SLA035J1). The red adds a touch of drama to this dark watch when worn above the waves. Red will stand out and be easy to spot, and it adds a touch of color. But the red serves another, more mysterious, purpose. Red objects are harder to see when deep under water, especially during a night dive. Why is this important? The red accents on this watch are on the second hand, and the second hand is not as critical to a diver as the minute hand. Since the second hand sort of disappears, you will automatically focus on the ever-important hour and minute hands. Powered by the caliber 8L35, this watch is an automatic with manual winding capacity, and is water resistant to 300 meters.

Seiko Prospex Black Series Limited Edition SPB125J1 / SSC761J1
The next two models are also all-black but have a different accent color: orange. Some identify orange with safety, perhaps since the military and Coast Guard use the color for the sea-borne emergency equipment. Others think of orange as red’s cousin on the color wheel. It is not as daring as red but it can sure hold its own.

The SPB125J1 model is an automatic watch with manual winding capacity. The look is sporty and sturdy and the orange on the minute hand and hour markers are quite nice without being overt. The caliber 6R35 powers this model, and the watch is water resistant to 200 meters.

The SSC761J1 model is a chronograph (up to 60 minutes in 1/5 second increments). The minute hand and hour markers are orange here too, but the chronograph is really what you’ll want to focus on. The watch is powered by the caliber V192 and is water resistant to 200 meters.

Take Your Pick
These Seiko Prospex Black Series watches will be available in a staggered release for the first quarter of 2020. The orange-accented models (SPB125J1 and SSC761J1) will be available beginning in February this year. The automatic watch with manual winding will be in a limited edition of 7,000 pieces, while the chronograph will have only 3,500 pieces available. The Seiko Prospex Black Series Limited Edition SLA035J1 (with the red accents) is the most exclusive of the bunch, there being only 600 units available, and will be released in March.