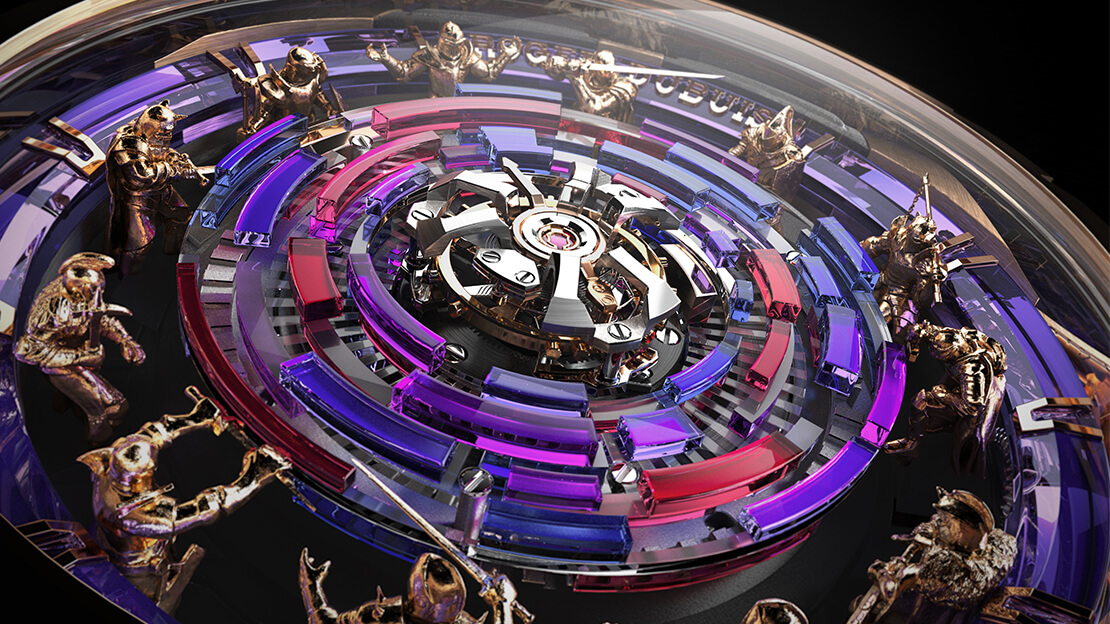 Bending boundaries, breaking rules, reinventing the game. Underscored by hyper technical craft and hyper expressive design. A place where bigger is better and going bolder is mandatory: welcome to Roger Dubuis. Showcasing some of the most excessive creations yet, the future of fine watchmaking has arrived with a ground-breaking Knights of the Round Table Monotourbillon/X timepiece, and a remarkable evolution of the Excalibur Monobalancier. Determined to mark the physical return of Watches & Wonders with outstanding masterpieces, Roger Dubuis continues to elevate its art and technical mastery to new heights, always striving for excellence, and constantly challenging itself to go further.

TWELVE KNIGHTS FIGHT GRAVITY WITH THE MIGHTY MONOTOURBILLON
The story of the Knights of the Round Table collection cannot be told to just anyone. One of Roger Dubuis’ most iconic, bold and breathtaking collections, each edition re-interprets the legend through the lens of Hyper Horology. Only the craziest minds dare to combine artistic mastery, horological craftsmanship and contemporary design in this way. Now for the first time, the valiant knights of King Arthur’s legend are ready to take on the invisible force of gravity with a secret device: one of Roger Dubuis’ pride and joy , the Monotourbillon itself. Ensuring the 8th edition was worthy of representing the lucky number of the late, great Mr. Roger Dubuis himself, the move not only upends the rules of the game, it reshapes the future of Hyper Horology. The equalising round table is key to the world of King Arthur’s legend. Though this essential set up is non-negotiable, creating a design born from this concentric requirement provided a challenge the incredible watchmakers were not afraid to take on. Displaying true technical prowess, the Monotourbillon emerges from the centre of the timepiece in a powerful demonstration of advanced mechanics. Becoming the shield against the gravitational force endangering the heroes and precision alike, the knights stand proudly around this iconic feat of engineering knowing they will tackle their common invisible enemy together. Just as the twelve knights take their duty to protect the realm seriously, the Maison’s quest for peak performance is realised by expanding the diameter of the balance wheel to increase stability and ensure the movement is less sensitive to gravity’s effects. An accomplishment Roger Dubuis is proud to showcase in one timepiece: the pinnacle of its artistic collection combined with one of its signature complications.

HYPER EXPRESSIVE CRAFT
Defending horological mastery from the threat of gravity is no easy task for the hourmarked heroes cast in Pink Gold 750/1000 and crafted individually through micro-sculpture. Small enough to fit in a timepiece but mighty enough to represent the commitment, passion and boldness Roger Dubuis is known for, each knight is just 6mm tall, created with his own personality and equipped with armour. Such an exceptional timepiece had to feature equally exceptional hands, fully integrated into the circular design. That’s why two gold markers were chosen to indicate the position of the minute and hour with perfectly centred rotating discs. What’s more, translucent purple blocks carved from Murano glass appear to levitate around the Monotourbillon while the double surfaced flange is carved from a single block of Murano glass too. To realise this effect, playing with no less than eight layers of décor around the dial was needed; a true marvel considering the limited surface area. In keeping with the design, and to respect the position of the knight at 3 o’clock, the setting system is decentred to a position at 2 o’clock. Push down on this function and a small red flag indicates that the timepiece has moved from winding to setting mode. Available in a 45mm Pink Gold 750/1000 case sealed by a notched bezel, the timepiece is completed with an embossed black calf-leather strap. Just as being invited to the round table was an extreme honour, such high standards of excellence are rewarded with the Poinçon de Genève; one of the most exclusive stamps of certification in watchmaking today.

HYPER MECHANICS MADE FOR PEAK PERFORMANCE
The last in the evolution of the Excalibur collection is the new Excalibur Monobalancier. Bringing visionary engineers together with incredible watchmakers, the timepiece is enhanced with a series of mechanical and aesthetic improvements that give birth to a sophisticated creation of contemporary flair. Performance is pushed to its maximum for the new RD 720SQ calibre with technical developments designed to increase the power reserve to 72 hours. Meanwhile, the micro-rotor is optimised to minimise its vibrations, and crafted from Pink Gold 750/1000 and Tungsten finished with an engraving of the Roger Dubuis’ monogram to modernise its design. The Maison continuously seeks solutions for better performance and precision too, hence doubling the balance wheel inertia to improve stability and make it less sensitive to shocks. In the same way, better efficiency and energy transmission is achieved by optimising the shape of the escapement wheel, now constructed from diamond-coated silicon, and paired with adjustable, diamond-coated silicon pallet-stones, and a new lube.

HYPER CONTEMPORARY DESIGN
Reinterpreted for the modern world with sophistication and flair, the Excalibur Monobalancier is designed with clean cut lines, fluted bezel and sharp notches, while the signature star is reshaped to levitate freely above the barrel. A contemporary approach is further evident in the decorations amplifying the expressive nature of this 42mm timepiece, including highly contrasted decorations such as sand blasted, satin brushed surfaces, and polished angles. Meeting the exceptional high-standards of the Poinçon de Genève, two editions are available, one with an EON GOLDTM* case and an embossed black calf-leather strap, the other one also with an EON GOLDTM* case and adorned with 60 round cut diamonds and an embossed purple calf-leather strap. Both straps feature a patented Quick Release System to ensure ultimate versatility for the wearer.