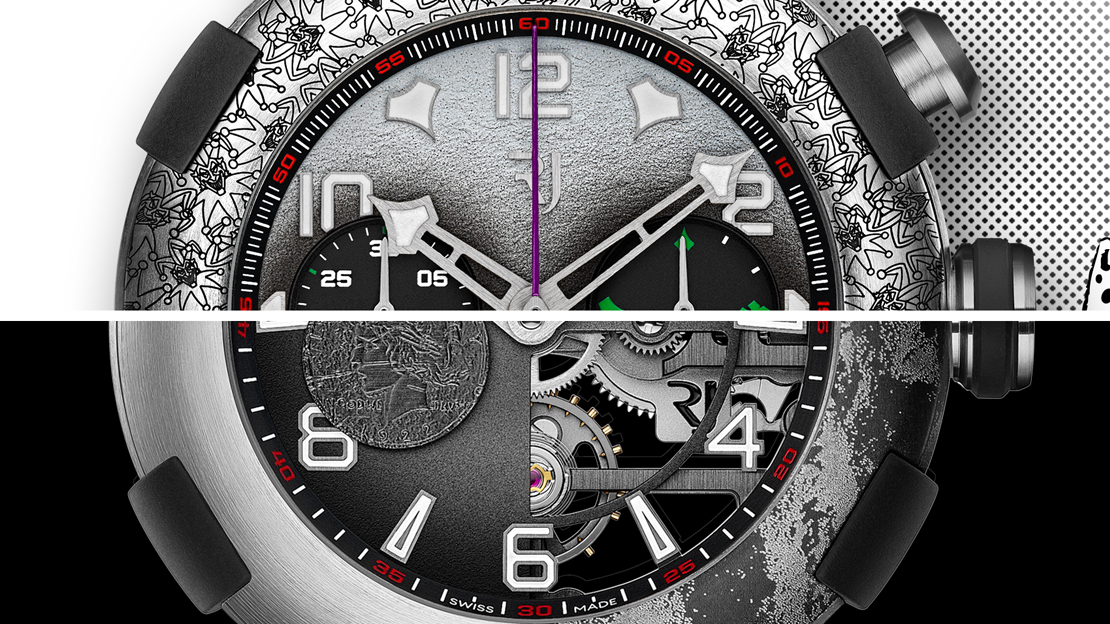 FIVE years ago Swiss watchmaker RJ and Warner Bros. Entertainment came up with the collaborative Batman watches, limited to 100 examples, to mark the Dark Knight’s 75th anniversary. This year, for Batman’s 80th anniversary celebrations held in September at the newly opened Galeries Lafayette Champs-Elysees concept store in Paris, RJ unveiled the follow-up series to the original Batman run — the X Batman Villains composed of the Arraw The Joker and Arraw Two-Face.

The Joker chronograph, limited to only 100 pieces, is filled with design cues taken from the character. The dial of the watch evokes the ghoulish make-up on the Joker’s face, rendered by means of airbrushing — so no two dials will look exactly the same. The black bicompax chronograph layout logically become the Joker’s eyes, complete with dark circles around them. The watch’s openworked hour and minute hands are tipped with the Ace icon on playing cards. This Ace icon is then also used as hour markers, accompanying the Arabic numerals. The second hand has the Joker’s logo as a counterbalance.

Framing the dial is the signature thick bezel of the 45-millimeter-wide titanium Arraw case. The bezel serves as a canvas for plenty of Joker portrait sketches, all laser engraved on the titanium surface. RJ’s rubber “bumper guards,” and the Joker portrait engraving on the solid caseback, add more detail to the watch.

Rounding out the Arraw The Joker piece are three interchangeable straps. Two are made from alligator hide in bright green or purple with contrast stitching, recalling the Joker’s hair and clothing. The third is a rubber black strap. All are quick-fit affairs; simply press on the Batman logo-engraved screws on the watch’s lugs and out (or in) the strap goes.

Beating within the Arraw The Joker is RJ’s cal. 2042, a 57-jewel, self-winding ticker that operates at 28,800vph and which has a 42-hour power reserve. Its chronograph counter, sitting at 9 o’clock, is good for 30 minutes. Opposite this register is the small second subdial.

RJ’s piece for Two-Face is just as irreverent, if not more adventurous in terms of design. Taking off from Two-Face’s, well, duality, the watch also appears like it were two halves of different watches glued together. As a current Arraw, the watch’s case is also a 45-millimeter-wide chunk of titanium. But now the right side of the watch has been completely distressed — the titanium bezel has a rough, uneven texture, and the dial on this side disappears, exposing the movement underneath (incidentally, RJ’s cal. RJ004-M, a handwound, skeletonized, 21-jewel ticker beating at 28,800vph and which stores power good for around 48 hours). The right side of the quick-fit leather strap has been roughened up as well.

All this contrasts against the smooth left side of the watch. All right, there is one textured element on this side — a laser-engraved coin. It refers to the one Two-Face constantly flips when he makes a decision. On the watch, this serves as the rotating small second subdial.

Batman may think otherwise, but villains can be cool.