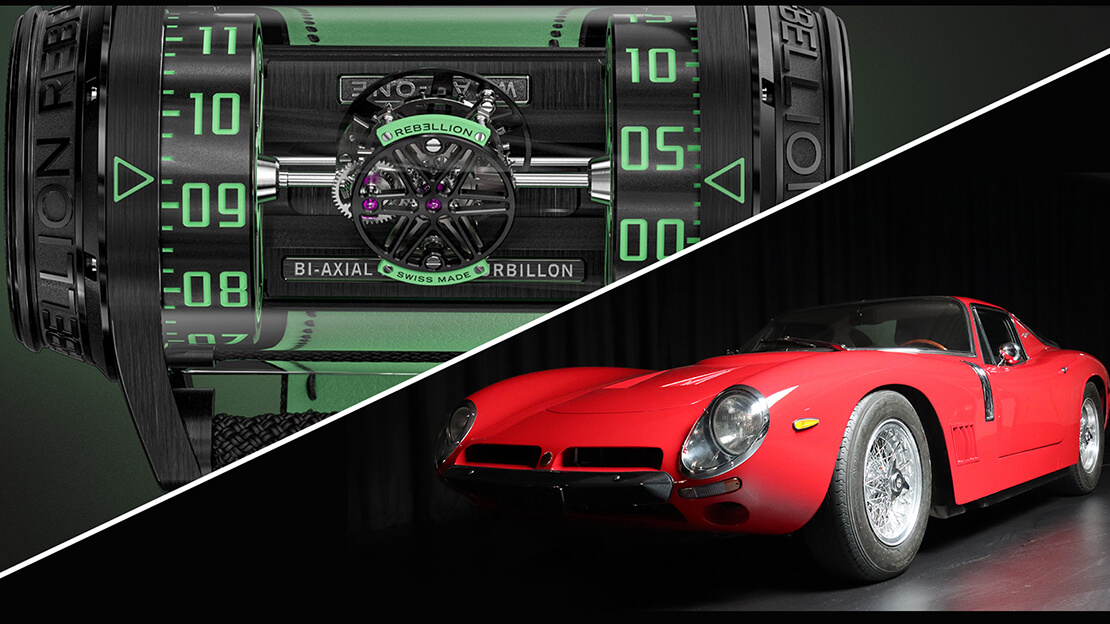 From June 9 to 12, 2022, Rebellion Timepieces and Rebellion Motors are offering the opportunity to discover and acquire exclusive new products and a few surprises.

Since 2004, Top Marques Monaco has been the must-attend event for lovers and collectors of cars and watches with supercharged engines and bold designs. Present at previous editions, Rebellion maintains a real complicity with this show as with the Monegasque principality. Not without reason! The brand of rebel watchmakers shares the same passion for motor sports. For more than a decade, Rebellion has hosted the most important endurance competitions with its team. This season, Rebellion Timepieces is alongside the Alfa Romeo F1 Team Orlen and was on track during the legendary F1 Grand Prix in Monaco on May 29 with its two new Re-Volt Valtteri Bottas C42 and Re-Volt Zhou Guanyu C42 creations.

In order to give access to its non-conformist universe outside these major events, Rebellion is also anchoring itself on the French Riviera by offering its timepieces in the boutiques of its partner Bel Art. The summer will also be marked by Rebellion’s colors with the upcoming opening of new pop-up stores.

For this 17th edition, Rebellion Timepieces will present its main watch novelties inspired by the world of sports cars. On the occasion of Top Marques 2022, the public will be able to acquire exclusively all the creations unveiled during the Watches & Wonders Geneva exhibition on its friendly stand of more than 100m2 located in the Ravel space of the Grimaldi Forum.

Visitors will be able to discover the Weap-One Biaxial Flying Tourbillon. This exceptional timepiece brings the most prestigious of horological complications into the modern world with a complex mechanism featuring a flying tourbillon and a resolutely avant-garde tubular case in titanium and sapphire. Two discreet flat titanium crowns, perfectly integrated, close this atypical cylinder-shaped case. The one on the left is dedicated to winding the caliber and the one on the right to set the time. The hours and minutes are displayed by means of two rollers.

The T-500 model demonstrates Rebellion Timepieces’ ability to innovate. This futuristic-looking timepiece is the only one in the world with a record 450-hour power reserve, achieved by a hand-wound movement with six barrels. A real kinetic sculpture with its inclined balance, this mechanism contributes to the style of the watch. This watch also features an original display of hours and minutes on two parallel rollers.

The three variations of the RE-Volt 3 Hands Carbon Colored also push back the conventions with their case machined in a high-tech material. Their design benefits from a new aesthetic obtained through the use of a new technology: colored carbon. The RE-Volt Arctic Storm features the bluish hues of ice and pack ice. The Mars Valley offers a journey towards the rocks of the red planet of our solar system. The Toxic Storm model combines three shades inspired by the aurora borealis to offer a remarkable visual composition.

Rebellion Timepieces is also exhibiting its collection of set watches, including the new RE-Volt Saphir Bleu. 328 baguette-cut blue sapphires illuminate its case. This unusual piece dynamizes the watchmaking codes with its sober and exuberant personality.

Rebellion Motors will also be present during the entire Monegasque event. The workshop maintains and repairs sports cars of yesterday and today. The garage will exhibit exceptional models in the Diaghilev space of the Grimaldi Forum on more than 150m2. Among the cars on sale, a rare Bizzarrini 5300 GT Strada in perfect condition will attract the attention of collectors and connoisseurs with its aluminum body and Chevrolet V8. It is one of the 123 coupés produced between 1965 and 1968.

The Ferrari 365 GTC in its gray dress designed by Pininfarina and equipped with a powerful V12 should not leave indifferent either. About two hundred examples were built by the Italian firm at the end of the 1960s. The brand with the prancing horse is still in the spotlight with a Ferrari 246 GTS, better known as the Ferrari Dino. With its 6 cylinders and its sublime red paint, this car has all the assets to join the garage of an informed collector. Last but not least, another masterpiece will turn more than one eye: a yellow AC Cobra Bardhal Replica. Only 18 examples left the workshops to compete for the Bardhal trophy. Among the chassis produced, only four, including this one, are recognized as “Shelby”, and appear in the Shelby Registery Book.

Rebellion Timepieces and Rebellion Motors look forward to seeing you!