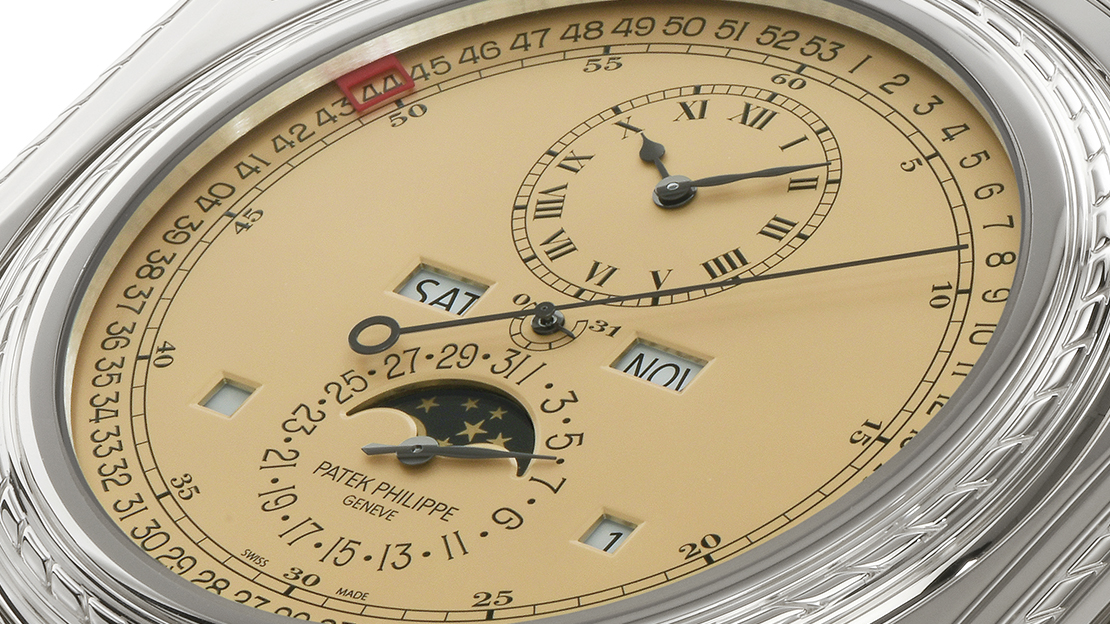 At the charitable 2021 Only Watch auction which took place in Geneva on Saturday, November 6, the Patek Philippe Ref. 27001M-001 desk clock with a perpetual calendar, a power reserve of 31 days, and a totally new patented mechanism fetched an amazing amount of 9.5 million Swiss francs. The manufacture is proud and delighted that this amount has been donated to the Monaco Association against Duchenne Muscular Dystrophy (Association Monégasque contre les Myopathies AMM) in its efforts to pursue the development of therapies for the treatment of degenerative neuromuscular diseases.

Since 2005, Patek Philippe has been supporting the charitable Only Watch timepiece auction, each time donating a special unique version of one of its wristwatches, usually a grand complication. For the Only Watch auction in 2021, the manufacture opted for a new approach and created a desk clock with a novel mechanism as well as unique features.

Patek Philippe took inspiration from a desk clock with a perpetual calendar and a power reserve of 8 days originally created in 1922/1923 for James Ward, an engineer and automobile manufacturer who ranked among the most loyal and illustrious customers of the manufacture. Today, this timepiece can be admired in the Patek Philippe Museum in Geneva (Inv. No. P-140). But the engineers were tasked with the creation of a totally new manually wound movement with a power reserve of 31 days, a rate accuracy of ±1 seconds per day and a level of user-friendliness worthy of a 21st-century caliber

A new high-performance movement
The result of seven years of development work is the rectangular caliber 86-135 PEND IRM Q SE with the Patek Philippe Seal; it is composed of 919 parts of which nearly half belong to the perpetual calendar. Its development was accompanied by nine patent applications. They relate to innovations and optimizations to boost long-term reliability, to reduce energy consumption of the perpetual calendar, to improve user convenience, and to safeguard functionality in the event of incorrect manipulation.

The power reserve of 31 days is achieved with three spring barrels connected in series. To guarantee a maximum rate deviation of ± 1 second per day, the engineers endowed the movement with a veritable precision adjustment ensemble. With a patented constant-force mechanism, it assures that the amplitude of the balance remains constant for an entire month, from the first to the last day of the power reserve. A discreetly positioned power-reserve indicator in the middle of the dial informs the user when the movement needs to be rewound.

As regards functions in comparison with the “Packard” desk clock, Patek Philippe added two innovations. One of them is a jumping second (also referred to as a seconde morte) that in the style of antique regulator clocks performs a small jump every second. The second one is a weekly calendar – the useful display of the week number – which thanks to a small frame on the edge of the dial that moves along the week number scale makes it quickly and easily legible. The manufacture retained the display of hours and minutes on an off-center subdial at 12 o’clock, the moon-phase display at 6 o’clock, and the day/month indications in apertures at 9 and 3 o’clock. The date display of the perpetual calendar – in the “Packard” clock, it uses a hand from the center – is an analog date with a subsidiary dial at 6 o’clock. It is supplemented with two aperture displays for the day/night indication (at 7:30) and the leap year cycle (at 4:30). Both displays are indispensable for setting the calendar. All displays stand out very legibly against the opaline 3N yellow gilt dial.

A mechanical dashboard
For the unique Only Watch 2021 timepiece, the designers largely adopted the shape of the “Packard” desk clock, albeit in a slightly larger scale. At the same time, they gave it an innovative touch, endowing it with a veritable mechanical dashboard beneath a hinged cover which folds open to the left. With the modern control desk, all settings can be made intuitively, simply, and practically – fully in line with Patek Philippe’s user-centric philosophy.

Beneath the hinged cover in the upper left-hand corner, there is a socket with a patented ejection system for the key used to wind and set the clock – a multi part, artistically finished accessoire. The upper righthand corner has two key openings for setting the time and winding the movement. Thanks to its ample power reserve, the desk clock will operate 31 days each time it is fully wound.

The engineers placed five correctors beneath the dial. The correctors are marked with letters on symbols and can be operated with fingertip convenience to set the perpetual calendar from left to right in the same order as they appear on the dial: Week, day of the week (Day), moon phases (crescent moon), Month and date (Calendar). It takes a complex system of mechanical countershafts to be able to arrange these correctors on an arc. Directly beneath it, a further opening makes it possible to stop and restart the movement with a key. Thanks to this stop-seconds feature, the time can be set with one-second accuracy.

A precious work of art
For the looks of the Only Watch desk clock, Patek Philippe took inspiration from the richly decorated historic role model and reinterpreted it in a classic timeless manner. The case in 925 silver carries veneers of precious American walnut in reference to Packard’s homeland and is decorated with traditional screen-printed gold fillets. The case edge shows a cord motif that is repeated on the bezel. We see silver-gilt appliques in the style of the decorative elements on the 1923 desk clock; three rosettes in the bottom corners and at 12 o’clock, acanthus scrollwork that frames the Calatrava cross, and four case feet depicting griffon vultures. A plaque on the narrow front side bears the inscription “THE ONLY ONE” to emphasize the one-of-a-kind aspect of this exclusive treasure.

With this unique piece – the world debut of a totally new patented mechanism – Patek Philippe once again wanted to appeal to the interest and curiosity of connoisseurs and collectors.

This goal was achieved. The Ref. 27001M-001 desk clock was gaveled off for 9.5 million Swiss francs. This is nearly one third of the total proceeds of almost 30 million Swiss francs fetched for all 53 auction lots in favor of the fight against degenerative neuromuscular disorders.