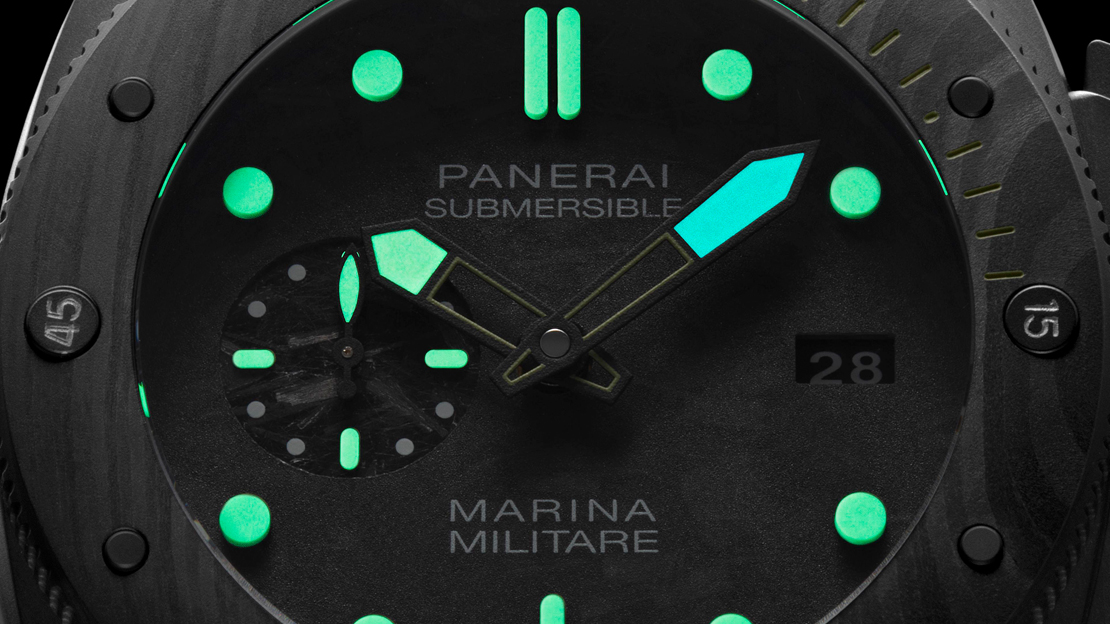 OFFICINE Panerai kicked off the year with the launch of two new Submersible Marina Militare Carbotech models — one of which a special piece limited to only 33 examples. Both wear blacked-out, 47-millimeter cases made from Carbotech, and which are water-resistant to 300 meters. The watches’ bezels, dials and signature Panerai crown protectors are in Carbotech, too.

Carbotech is a carbon-fiber-based material formed by bonding together thin layers of carbon-fiber with a special polymer. Because of the process needed to make it, the surface pattern that comes out is different in every watch. On the Marina Militare Carbotech models, this peculiarity is especially evident on the bezel and dial, on which no two watches get the same “camouflage” markings.

Besides distinct looks, what Carbotech provides the Marina Militare are structural benefits — the material is stronger than steel yet is even lighter than titanium.

Powering them is Panerai’s in-house, self-winding cal. P.9010, which packs a pair of spring barrels to allow it three days’ worth of power reserve — quite suitable given the watch’s “Survival Instrument” tag. Other features of the movement that should prove useful are a balance mechanism secured in place by a bridge with twin supports, and Incabloc shock protection.

With 31 jewels and a 28,800vph ticking rate, the cal. P.9010 is also fitted with a mechanism that lets the hour hand be adjusted in one-hour increments forwards and backwards, with the act not interfering with the sweep of the second hand. This makes setting the time for a different location quite easy.

Instantly differentiating the two Marina Militare Carbotech models is each piece’s color palette. The ref. PAM 979, which is the regular production version, is basically an all-black affair, save for its white bezel indices, hour markers, hands and other inscriptions. The limited-run ref. PAM 961 wears military green luminescent bezel indices, hour numerals and hands (other inscriptions, including the date display, remain in white). The PAM 961 also looks more military-ish, thanks to a green rubber strap.

This limited-edition watch has a different engraving on its titanium caseback, too; the logo of the COMSUBIN, short for Comando Raggruppamento Subacquei e Incursori Teseo Tesei. It’s the Italian Ministry of Defense’s diver and incursion group in the Marina Militare, an elite clique of about 700 men who live by the motto “From the sea we assault the enemy.” This is a tough bunch.

Each of the 33 individuals who bought this special-edition Marina Militare Carbotech also acquired for himself a training session with the COMSUBIN. It’s a rare opportunity, this, as only a few souls outside of the elite commando force have had the chance to train with this group, whose precursor, incidentally, were divers known to have used human torpedoes in attacking enemy ships during World War II. More recent engagements of the COMSUBIN include action in Iraq, Afghanistan and Lebanon. A training session with them won’t go swimmingly.

Still, all 33 buyers of the Marina Militare COMSUBIN, in early September, reported for a two-day boot camp duty at the Teseo Tesei naval base in La Spezia. Wearing their special timepieces, the men sailed aboard assault inflatables to the Varignano Fortress where they underwent a medical check-up. They were then given uniforms personalized by Panerai — the required attire for the planned assault exercises on land, sea and air.

These were set on the real “experience day.” The Paneristi joined the COMSUBIN in sea diving exercises, shooting sessions, an obstacle-course run and a 100-meter zip-line pass across a 200-meter crevice. They were also made to board military helicopters to the Muzzerone Fortress, as well as dropped by the Anteo, the Italian Navy submarine rescue ship assigned to the COMSUBIN. The training activities started early in the day and were supervised by the unit’s Operational Divers Group and Operational Raiders Group.

Clearly, the Submersible Marina Militare Carbotech dedicated to the COMSUBIN is not only a watch, it’s an experience altogether.