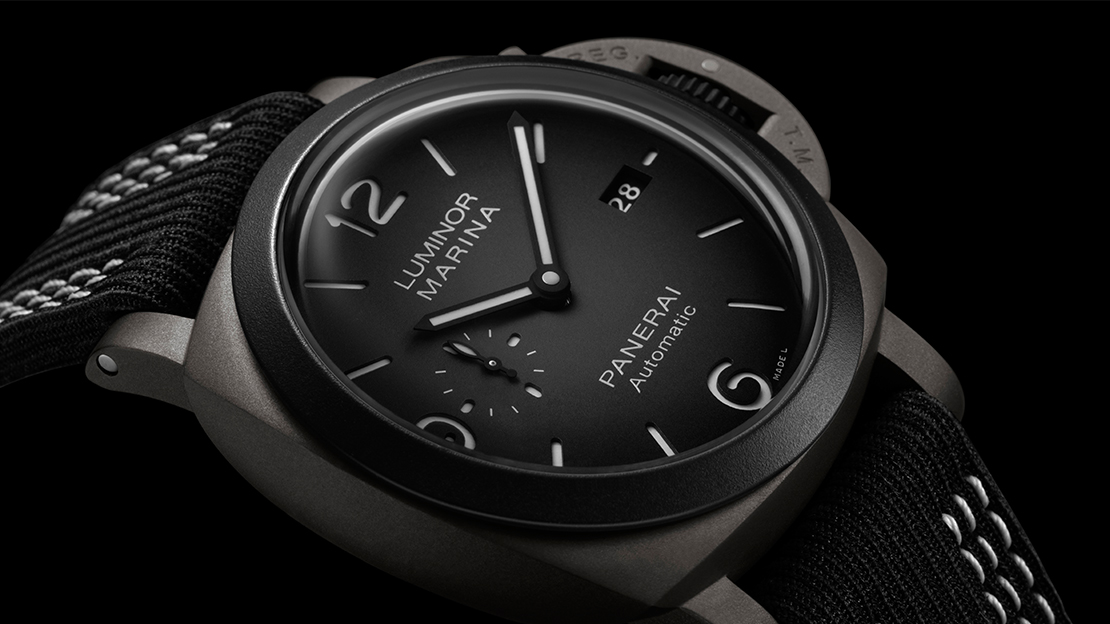 The Panerai Luminor was introduced in 1950. At the time, the company was a supplier to the Italian Navy and did not make watches for civilians. Panerai named the watch “Luminor” because of the tritium-based luminescent material that they patented the year before. The watch had an oversized cushion-shaped case and a levered crown guard designed to increase water resistance. It was only in 1993 that they made the first civilian models. Hollywood actor Sylvester Stallone wore one in his film Daylight and gave the watch a taste of the limelight.

On this 70th anniversary of the watch, Panerai releases the Luminor Marina 44mm Guillaume Néry Edition, a watch that draws inspiration from its illustrious history. Reaffirming their connection to the sea, Panerai introduces an instrument inspired by its Ambassador and constant weight free diving champion Guillaume Néry.

Néry grew up in Nice, by the Mediterranean Sea. He discovered free diving when he was 14 years old. He joined a free diving club and chose to specialise in the constant weight discipline, using fins and without the use of a sled. When he was 19, he joined the French national team and set a French constant weight record of 82 meters, a depth that also matched the world record at that time. The following year, he reached 87 meters becoming the youngest world record holder in the history of free diving. His streak of breaking records continued on as the years went by. His most recent one was in 2015 where he had a record dive of 126 meters in the constant weight division.

Recognising the importance of legible diving instruments, Panerai celebrates the 70th anniversary  of the birth of the Luminor with the Luminor Marina 44mm Guillaume Néry Edition, a patented tritium-based substance with luminescent properties in a limited edition model in 70 pieces, and with a 70-year warranty. (For further details on this warranty, please refer to the conditions as set forth in the limited international warranty that comes with the watch.)

This new watch is a radical distillation of innovative aesthetic elements, like the rubberised coating applied to the bezel, crown and bridge lever. The accentuated convex glass and the dial with an evocative dégradé effect that emulates the shades produced as sunlight filters through the depths of the sea. This new model reflects the sophisticated approach to working with advanced materials cultivated by the Panerai Laboratory de Idee, including Direct Metal Laser Sintering (DMLS) technology, which shapes titanium using a 3D printing process.

The calibre P.9010 powers this watch. It is a self-winding movement measuring only 6 mm thick and designed and developed entirely within the Panerai Manufacture in Neuchâtel. It is equipped with double barrels for a three-day power reserve and a quick time adjustment function that can move forward or backward in increments of one hour, and is connected automatically to the date indicator. The movement contains 200 components, has 31 jewels, has a Glucydur™ balance wheel, and vibrates at 28,800 vibrations per hour. The hours and minutes are displayed on central hands. The small seconds and a date window appear at 9 and 3 o’clock respectively.

The case is in sandblasted DMLS titanium and has a thickness of 16.2 mm. It has a titanium bezel, crown, and bridge lever with rubberised coating. The twelve-sided screwed caseback is in titanium with a DLC coating features the signature of Panerai ambassador Guillaume Néry, a silhouette of a free diver, and the “70 Years Warranty” logo. The watch comes with a recycled PET strap with white stitching. Included with the watch is a screwdriver to remove the buckle and a white rubber technical strap that features a luminescent “Officine Panerai”.