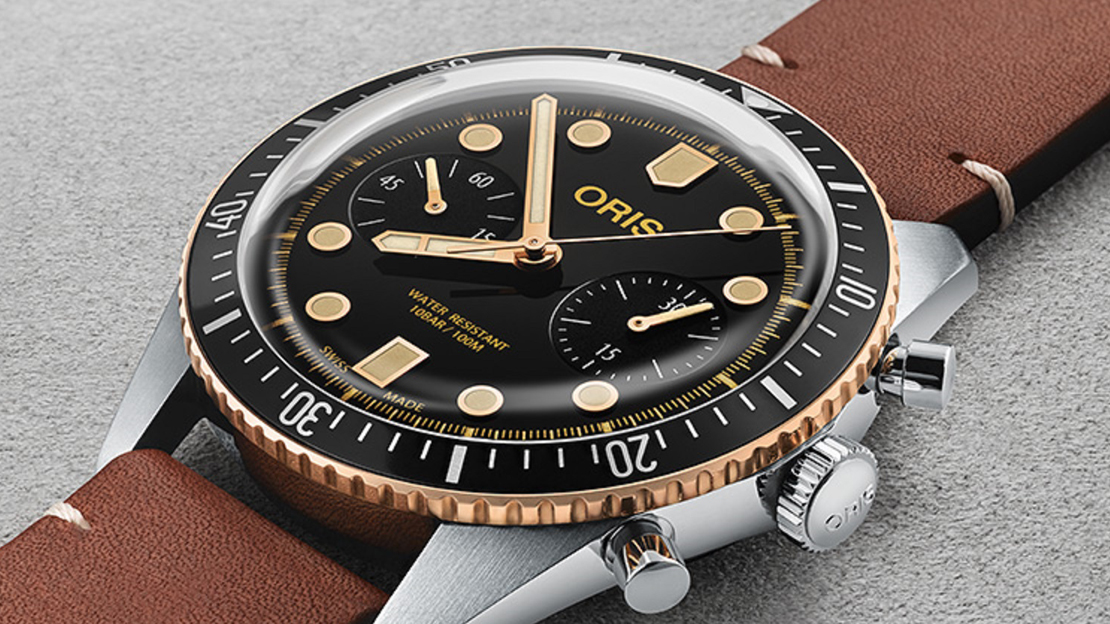 FROM a lone, one might even say, tentative, piece meant to stir nostalgia, the Divers Sixty-Five evolved into one of Oris’s most popular collections. The 2015 recreation of a 1960s piece quickly added on a variety of sizes, case materials and dial colorways. A new dial design was even adopted only a couple of years after the watch’s introduction.

Along the way, the Divers Sixty-Five also spawned limited-edition models. These include the cult-favorite, bronze-cased Carl Brashear three-hand and chronograph renditions. There are the Bucherer Blue Editions, too.

Now the Divers Sixty-Five Chronograph moves from its limited-run existence to full-on mainstream membership. The way Oris has done this is by fusing two features of the previous chronographs; the watch gains a steel case but retains some parts of it in bronze. This isn’t totally surprising. There already is a steel three-hand Divers Sixty-Five with bits of bronze on its bezel. And this should not even be confused with the bi-color steel-and-bronze piece unveiled at Baselworld earlier this year. It’s only logical for the production-run chronograph to don the wardrobe.

Retained in the Divers Sixty-Five Chronograph is the 43-millimeter-wide case, water-resistant to 100 meters, of the Carl Brashear version. But it trades in the bronze case with a steel one, on top of which sits a bronze unidirectional bezel with an aluminum insert in black. Its domed dial is also in black; the Carl Brashear’s was blue. The dial furniture, like in the three-hand steel-and-bronze model, is rose gold PVD-plated. Hands and hour indices (applied, by the way) get a beige tone recalling old lume. Inscriptions and other markers seem darker, closer to bronze. The resulting look is unmistakably vintage.

And still there is no date window.

Also unchanged is the bi-compax registers. The one at 9 o’clock is for the running seconds readout, opposite it is the 30-minute counter. Elapsed seconds are displayed by a central hand.

On the wrist the Divers Sixty-Five Chronograph feels and looks smaller than what its 43-millimeter case might otherwise suggest. The watch’s 16-millimeter height also seems thinner; the generously domed crystal accounts for a fair bit of the measurement. Its muted finishing also has a lot to do with the illusion as it tones down the watch’s presence, making it subtler. The bronze tones over brushed steel and black supply interest as they lend sophistication to an essentially tool-like aesthetic. Chronograph pump pushers are always cool.

The watch comes in either a distressed leather strap or a steel bracelet. Either looks great up close or in photos.

Assigned to the Divers Sixty-Five Chronograph is the same self-winding movement which powered the Carl Brashear and Bucherer versions — Oris’s cal. 771 based on Sellita’s SW 510. Its center chronograph hand is accurate to 1/4 seconds. It has 27 jewels, a power reserve of 48 hours and oscillates at 28,800vph. It hacks. In Oris form it wears a red rotor.

A great watch has clearly come into series production. And not a moment too soon at that.