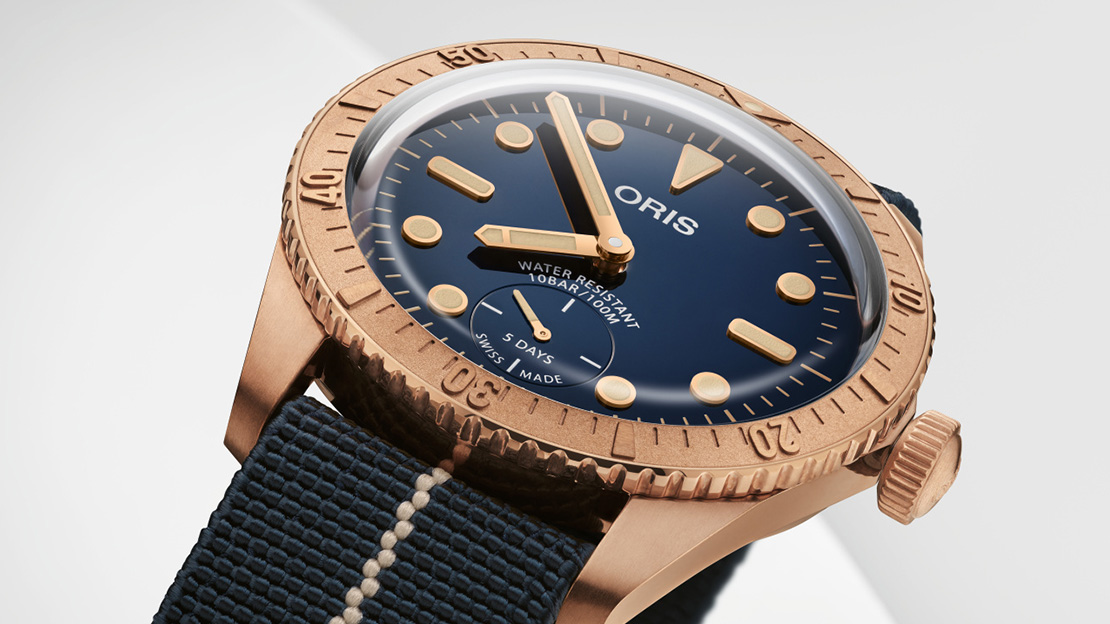 It is with great pride that Oris introduce the Oris Carl Brashear Cal. 401 Limited Edition, created in support of the Carl Brashear Foundation. Limited to 2000 pieces, the Oris Cal. 401 is the first watch to carry Oris Calibre 401, the second movement from the new family of in-house automatics.

Carl Brashear’s story is about one rising above from seemingly overwhelming adversities. He was born into a sharecropper’s family in rural Kentucky. He always wanted to make a different life for himself, but he was poor and faced widespread racism. In 1948, with very limited formal education, he joined the U.S. Navy where he set his heart on becoming a Navy diver. Despite his shortcomings and racial prejudice from the Navy, he became the first African American Navy diver in 1954. In 1966, he suffered the loss of the lower portion of his left leg during a critical mission off the coast of Spain. The Navy wanted to retire him because of his disabiity, but he fought to remain in active duty. He not only became the first amputee diver to continue service, but also became the first amputee diver to be called a Master Diver.

The Carl Brashear Foundation is a U.S.-based non-profit organisation set up to expose the incredible life of Carl Brashear and to continue his extraordinary legacy for future generations. The Foundation has donated thousands of dollars to veterans’ hospitals in the hope of rehabilitating the lives of wounded service members across the country.

For this third iteration of the Carl Brashear watch, Oris packed it with their new Calibre 401. It was designed from the ground up by Oris’s in-house watchmakers. As well as being more accurate than a chronometer (to within -3 to +5 seconds a day), the movement solved many of the mechanical problems of our time by offering heightened levels of anti-magnetism, a five-day power reserve, and a 10-year extended warranty. The Oris Calibre 401 differs from the Calibre 400 in that it features a small seconds at 6 o’clock, an Oris signature.

The watch has a blue dial, inspired by naval tradition, a uni-directional rotating bronze bezel with a diving scale in relief, and a custom-designed, hand-crafted moisture-wicking woven elastic nylon webbing strap produced for this watch by Erika’s Originals.

This new watch is cased in 40 mm bronze, a material chosen to symbolise, not just the diving helmets worn by Carl during his career as a U.S. Navy Master Diver, but also because it’s a metal that will tell its own story. Bronze is a natural material that patinates as it reacts with oxygen in the air and the moisture from the wearer’s skin. Over time, it will take on a unique finish, like a visual chronicle of the wearer’s own life wearing the watch.

Carl Brashear’s son Philip heads the Foundation. In an interview, he was asked how Oris helped them. He said: “It’s exposed my father’s legacy to people who may have never heard of him. Not everyone saw the movie Men of Honor. Because of Oris, people from all over the world have got in touch to help the Foundation and its cause, and to learn more about my dad.”

“This watch will again expose my father’s message of hope and resiliency,” he continued. “This world seems so angry and my father’s legacy will again be in the spotlight so that people may learn from him. Hopefully, many will see that despite our various backgrounds we are all part of the Human Race, and we must find ways to live together with respect and dignity.”

“Carl is an extraordinary legacy, and we’re incredibly proud to share in it and support the foundation,” says Rolf Studer, Oris Co-CEO. “Together with the Carl Brashear Foundation, we hope that every time someone wearing the new watch looks at it, they will be reminded to never give up, and to press on, no matter how insurmountable the challenges ahead appear.”