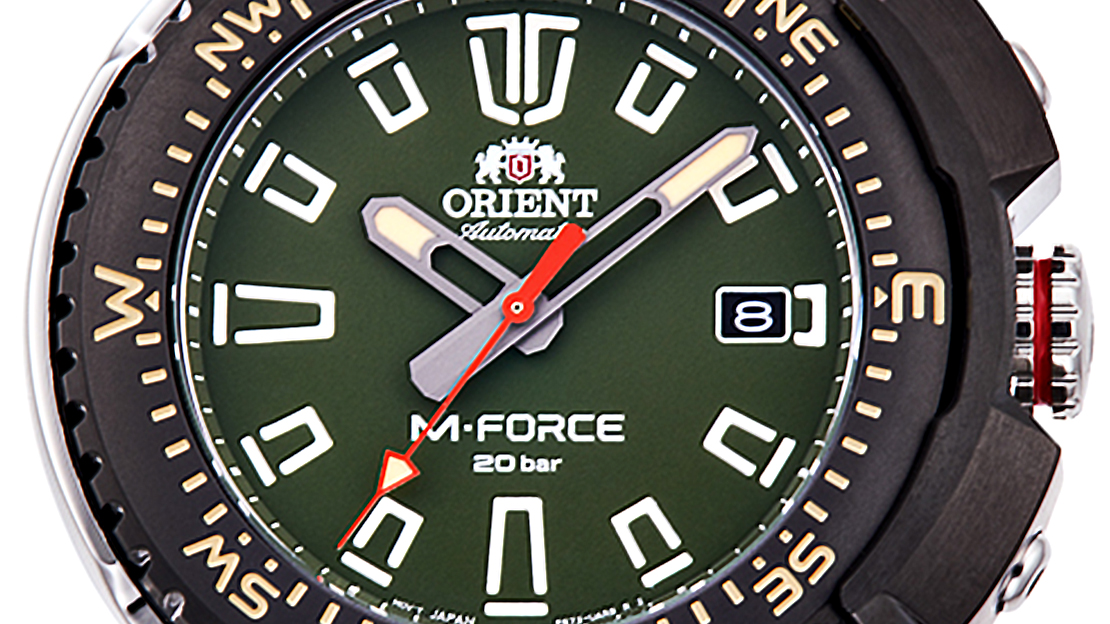 Launched as the flagship watch from the ORIENT Sports Collection in the past, M-FORCE watches are tough and “Massive” adventure watches that have captured the hearts of watch fans all over the world. The current and third M-FORCE generation was launched in 2020 to commemorate ORIENT’s 70th anniversary with a diver’s model. The watches in this second release are designed for the great outdoors with unique protection shield and a simple compass bezel, a handy feature to have when exploring.

The distinctive style and tough functionality of M-FORCE adventure watches have now evolved into a third generation after the series’ revival last year, inheriting the spirit of both the first generation (1997–2002) and the second generation (2011–2015).

The “M” of M-FORCE stands for three things:
– Mechanical: a mechanical movement that keeps time without relying on batteries or solar power
– Massive: a solid, durable watch equipped with shock-resistant exterior and interior structures
– Maverick: an original design that is both refined and daringly different.

This second release from the latest M-FORCE generation is designed for adventuring outdoors. Sturdiness and toughness are integrated into every design detail, creating a completely different feel compared to the preceding diver’s model. The watches also have a distinctive bidirectional compass bezel and a large protection shield that guards the rotating bezel and the huge crown from rocks and other hazards, creating a tough, rugged image. The letters indicating the north, south, east, and west directions are displayed in the same new font used for the numbers on the diver’s watch released last year.

The unique dial is protected by sapphire crystal glass for superior scratch resistance. The distinctively shaped indices are inspired by off-road tyre treads, blocks and stencils. The tips of the hands and the dented indices feature high intensity Luminous Light that charges with light for high visibility at night. The orange or black second hand provides an eye-catching contrast with the dial color.

Not only do M-FORCE watches look tough, but the movement is also shock resistant. Just like the M-FORCE diver’s model, the in-house automatic caliber F6727 features various devices against shocks: a movement holder to reduce horizontal shifting and secure stability when the watch is subjected to external shocks, a boost up spring to protect from vertical shifting, and a collet to reduce shock-induced displacement of the hair spring attached to the balance wheel.