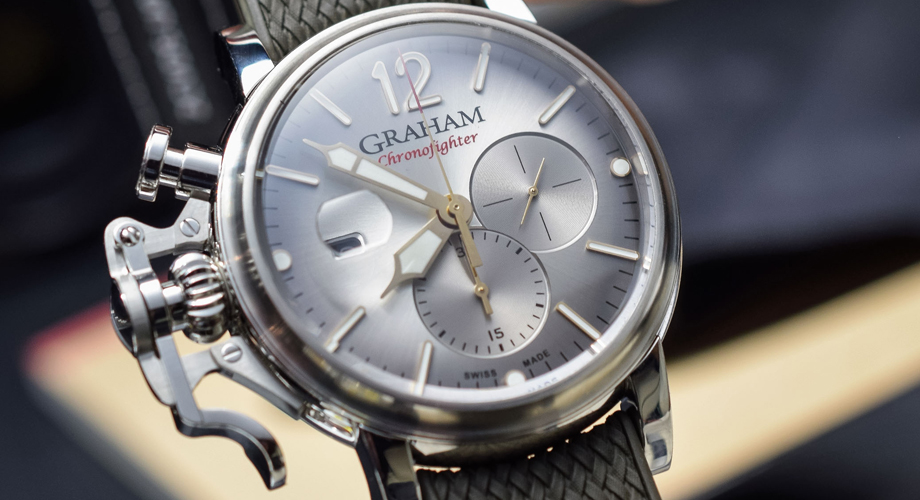 WELL, wristwatches did evolve from pocket timepieces, and so the first versions of the former were basically just recreations of the latter — which only happened to come with strap attachments. Now while most wristwatches shrank, there were a few which retained the plus-size dimensions of their ancestor. Fact is, by the time the 21st century counted off, going big time was once again gaining traction. And one brand that could be considered an early adopter of this movement is Graham.

Oh, it hasn’t changed its ways. Graham only recently introduced new models of its Chronofighter Vintage. Chronofighter, of course, is a line Graham has reprised periodically since 2001, and the iterations included pieces that heralded the trend toward mid-20th century aesthetics. As its name declares, the Chronofighter Vintage is one such model, and the line also wears a not-exactly-diminutive 44-millimeter case.

Now, the watchmaker has announced a larger version, aptly called the Chronofighter Grand Vintage. Comprising the collection is a squad of four distinct members, all lavished with 47-millimeter cases. Vintage touches adorning them are cathedral hands (suitably large), cream-colored indices (as well as Graham’s signature “12” marker) and sun-brushed dials in blue, brown, silver and black. The dials gradate in shade from the center, where they are lighter, then go dark around the edges.

Updating the pieces’ aesthetics, even if still leaning toward vintage, are rubber straps in black and green which both have mesh patterns evoking a Milanese bracelet (if leather is preferred, a blue one is an option). The pair of conjoined registers surely straddle this modern/old world line, too.

Equally binate is the Chronofighter Grand Vintage’s steel case itself. While unequivocally beefy, with fat lugs, it has a sloping bezel that softens up the overall look. Also helping out here is the watch’s domed sapphire crystal (another at the back displays the movement) which has a Cyclops magnifier for the date aperture. And hard to miss, especially on a scale like this, are the onion crown and its elaborate attachment for the chronograph lever, as well as the mushroom pusher reset button.

That the time-setting hardware all sit on the left side of the watch has aviation-history significance, and one which Graham has long embraced. The setup allows for easier operation of the chronograph lever and the reset button since it is the thumb of a pilot — or any wearer, for that matter — that will fiddle with these. This act is intuitive, no doubt.

The movement ticking beneath the Chronofighter Grand Vintage boasts of genuine horologic credentials — it’s Graham’s calibre G1747, which is based on the ETA 7750, in turn a Valjoux 7750 in a former life. In G1747 trim, the 25-jewel, self-winding calibre spins at 28,800vph, has a power reserve of 48 hours, and is protected against harsh impacts by an Incabloc shock absorber. Its layout puts the 30-minute chronograph counter at 6 o‘clock, a small second display at 3 o’clock, and a date window at 9 o’clock. Considering the Jules Verne steampunk vibe of the watch, aesthetics remain impressively tidy.