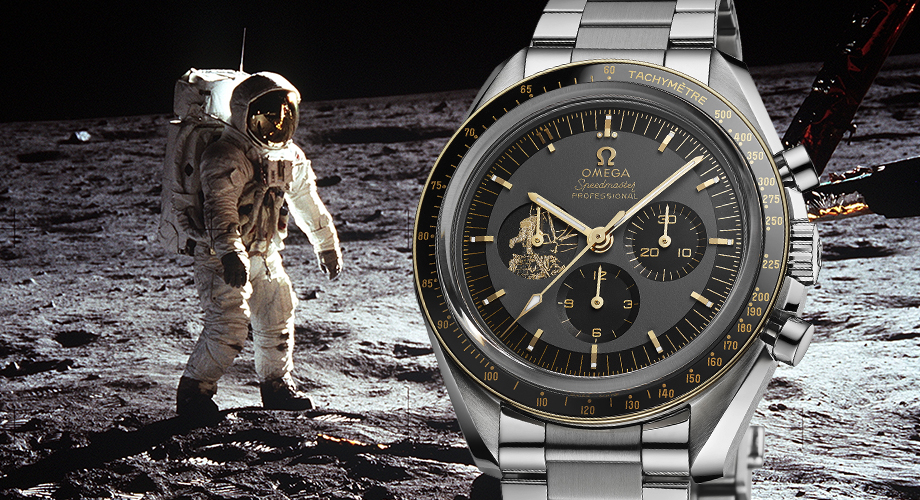 ON JULY 20, 1969 the Apollo 11 became the first manned mission to land on the moon. The next day conspiracy theorists went to work. Lunar loonies aside, Omega has more cause than any watchmaker to celebrate the occasion; its Speedmaster has taken part in all six moon landings, not to mention other lunar fly-bys. And so it’s little wonder the brand has been hyping the event’s 50th anniversary via the release of some special Speedmasters — the Moonwatch Anniversary Limited Series. Two of the more recent pieces are outrightly dedicated to the Apollo 11.

One version of the Apollo 11 50th Anniversary is the steel on steel model limited to 6,969 examples. While this watch may be described as “steel on steel,” its 42-millimeter-wide steel case is actually paired with Omega’s 18-karat Moonshine gold bezel, and a bezel insert in black ceramic on which inscribed is a tachymeter scale in the brand’s Ceragold. The watch’s indices and hands have also received doses of Moonshine (as well as PVD for the central chronograph hand).

Now, look closer: the marker at 11 o’clock is actually an “11” numeral rather just a stick index, as each of the other hour markers is. And laser-engraved on the small second subdial at 9 o’clock, also in Moonshine, is the image of Buzz Aldrin climbing down from the spacecraft.

The watch’s caseback provides another canvas onto which more lunar landing references can be placed. So at the center of this is a laser-engraved image of what is unmistakably a footprint made by a special shoe — as bespoke items go this is quite inelegant, but has proven to be up to the task — onto the moon’s surface. This image, by the way, is actually covered by sapphire crystal. Surrounding it are Moonshine inscriptions of “THAT’S ONE SMALL STEP FOR A MAN” and “ONE GIANT LEAP FOR MANKIND”.

This special Speedmaster uses the in-house cal. 3861, a handwound, chronograph movement that started out as a Lemania 1873, and which is also an updated version of Omega’s own cal. 861/1861. It gets such goodies as a co-axial escapement, a silicon balance spring and METAS chronometer certification (meaning it’s quite accurate). The 26-jewel cal. 3861, which spins at 21,600vph and has a 50-hour power reserve, also resists magnetism as high as 15,000 gauss. Perfect for the Earth’s magnetic field. Probably.

Anyway. The second version of the Speedmaster Apollo 11 50th Anniversary struts the same 42-millimeter-wide case — not to mention the cal. 3861 — but which is now completely rendered in 18-karat Moonshine gold. Embracing more cues from a Speedmaster from half-a-century back, this watch matches a ceramic burgundy bezel insert to the gold case, dial and bracelet (leather straps are offered, too). On its dial are faceted onyx hour markers.

The Moonshine Speedmaster has a more elaborate caseback; the cal. 3861 is displayed here beneath a sapphire crystal cover. It also features a partial map of the American continent and a domed lunar meteorite inlay. Around this glass are several engravings, the most significant among which is the one declaring the Speedmaster as “THE FIRST WATCH WORN ON THE MOON”.

The Moonshine Apollo 11 Moonwatch is limited to 1,014 examples.

In the Philippines, Omega is marking the first lunar landing with a special exhibition now running (lasting until August 4) at The Lumina Lobby at The Podium. The show started on July 21 with a celebrity-studded, gold-and-glamour-theme gig. Which is only fitting, considering what it was marking was a giant leap for mankind.