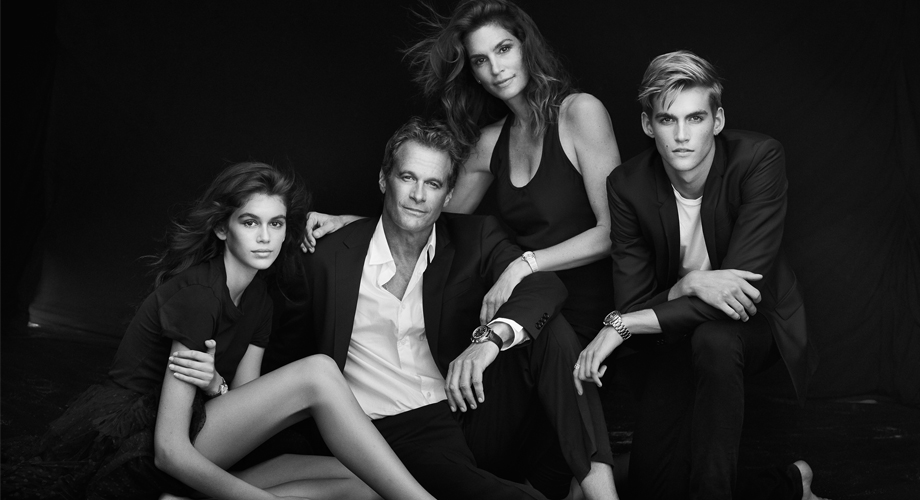 Paris, France. September 29, 2017. While Fashion Week brings flair and style to the runways, OMEGA has officially opened its “Her Time” exhibition in Paris at the historic Hôtel de Sully. The opening night event in the French capital was the perfect celebration for the brand’s history of exquisite women’s timepieces. As an added highlight for guests, OMEGA also welcomed Cindy Crawford along with her children, Kaia and Presley, who have recently been announced as the brand’s newest ambassadors.

Having joined OMEGA in 1995, Cindy Crawford is one of OMEGA’s closest friends and has been a renowned figure in the brand’s advertising and events for over 20 years. To begin the opening of the exhibition in Paris, Cindy appeared onstage with OMEGA’s President and CEO, Raynald Aeschlimann.

Speaking to guests, Mr. Aeschlimann said: “OMEGA’s women’s watches reveal some of the most beautiful designs in our history. There is so much variety and artistry, and I’m so proud to bring this exhibition to Paris, which is one of the world’s homes of fashion. Of course, to also be here with Cindy and her family is a special privilege and thrill.”

Having already been showcased in Milan, Moscow, Shanghai and Sydney, the “Her Time” exhibition displays OMEGA’s evolution of women’s timepieces and changing styles, from early Lèpine pendants and the iconic Ladymatic, through to “secret jewellery watches” and today’s latest creations. The watches are also complemented by examples of vintage artwork and classic OMEGA advertising, all of which show women in a variety of lifestyles and fashions throughout the years.

As Cindy and Mr. Aeschlimann chatted about the most famous OMEGA watches, three more special guests, Kaia, Presley and Rande Gerber, were invited to the stage. It was Cindy herself who introduced her children and welcomed them as OMEGA’s newest brand ambassadors. She said: “My journey with OMEGA has been incredible and I know that Kaia and Presley will enjoy working with the brand as much as I have. They are both talented in their own unique ways and I’m so proud that they will be the next ambassadors for these fantastic watches.”

Mr. Aeschlimann said: “Kaia and Presley represent the next generation of watch wearers. They are good looking, motivated, inspirational and full of energy. It’s incredible to have such a passionate family tradition within our brand and I’m so excited to begin working with these two young people.”

To mark the announcement, a special portrait of the entire family was then revealed. Captured by the renowned photographer Peter Lindbergh on Malibu Beach, it is the first official picture featuring all four family members together, including Cindy Crawford, Rande Gerber, and Kaia and Presley Gerber.

After viewing the exhibition themselves, guests were able to enjoy an exclusive set from the German DJ Robin Schulz, an OMEGA friend and Speedmaster fan who brought an energetic end to the night’s events, accompanied by singer Richard Judge.
The “Her Time” exhibition can be seen at the Hôtel de Sully from the 30th of September until the 15th of October 2017 from 9am to 7pm each day.