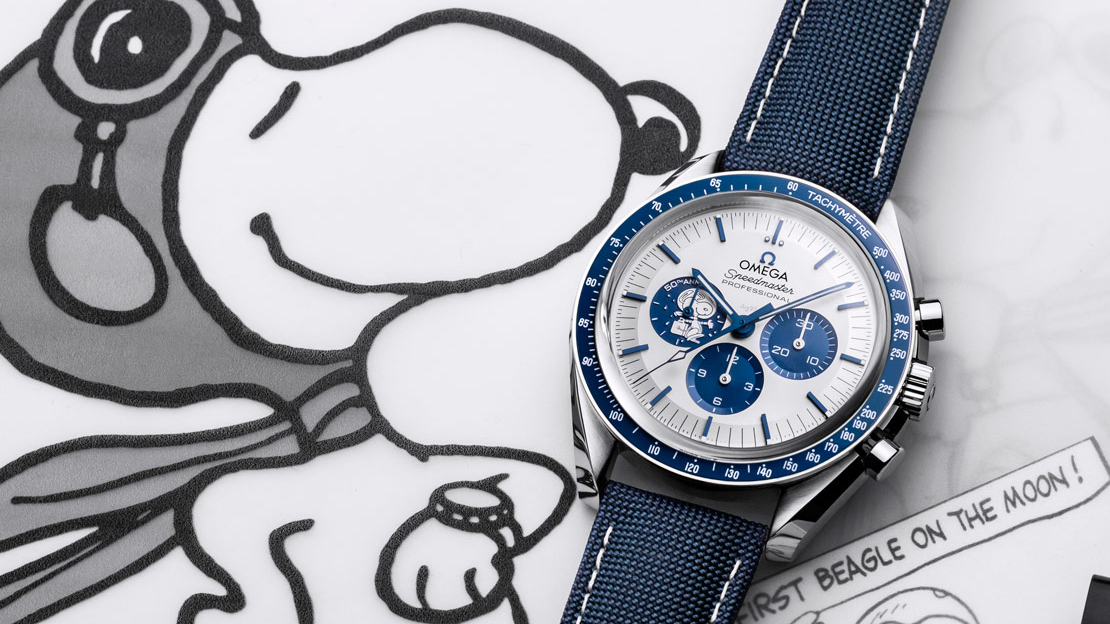 It’s been fifty years since the drama in space unfolded during the Apollo 13 mission. Unforseen events took place, forcing the astronauts, and the ground crew, to improvise for the safe return of Captain James Lovell, Command Module Pilot Jack Swigert, and Lunar Module Pilot Fred Haise. Armed with only the OMEGA Speedmaster Professional Chronograph, the crew was able to manoeuvre the Lunar Module precisely to re-enter the Earth’s atmosphere and safely make a splash down on the ocean.

As a result, NASA presented to OMEGA the coveted “Silver Snoopy Award” for their watch’s vital role in getting the astronauts safely back home.

This year, on the 50th anniversary of the Apollo 13 incident and the presentation of the “Silver Snoopy Award” to OMEGA, the latter speaks to two of the people that remember those moments best: Captain James Lovell, Commander of Apollo 13, and Lieutenant General Thomas Stafford, who flew on four NASA missions and presented OMEGA with its prestigious prize in 1970.

What emotions or memories has the milestone brought back?

James Lovell: Over the years, I’ve kept on thinking about Apollo 13 as a great example of teamwork, particularly between Mission Control and the flight crew. I can still remember the sudden explosion on board, and that feeling of successfully landing in the ocean.

Thomas Stafford: I remember presenting the Snoopy award to Dr. Widmer from OMEGA at a little ceremony in my office. I thanked him and OMEGA watches for the wonderful service they’d given us throughout the space programme, but particularly o Apollo 13, because the Speedmaster was so critical I helping us get safely back to Earth.

How important was the OMEGA Speedmaster to the Apollo 13 mission?

James Lovell: When the spacecraft clocks stopped, that’s when we required the Speedmaster. Without our normal navigation equipment, we had to view the Earth and use it as a guideline. Then we had to burn the engine for 14 seconds and turnout off. So we used the watch that Jack Swigert wore.

Thomas Stafford: The Speedmaster meant mission failure or success, because we didn’t have electrical power to turn on timers or computers. So all we had was just the watch. For so many seconds, they would thrust on that descent engine. It was OMEGA that got them back, and for that it was decided that they should receive a Silver Snoopy Award.

Looking back, how important has OMEGA’s contribution to the space programme been?

James Lovell: Quite simply, OMEGA was an essential part  to a successful mission.

Thomas Stafford: OMEGA was just an integral part of our total effort in space. When you’re in space, your baseline is time. Everything is based on time. We loved the professional Speedmaster. It worked good. Never failed. It was always just there, ready to go.

The new OMEGA Speedmaster “Silver Snoopy Award” 50th Anniversary timepiece is presented in a 42 mm stainless steel case. It is driven by OMEGA’s Co-Axial Master Chronometer Calibre 3861. This ground-breaking movement has taken the legendary Moonwatch calibre to new standards of excellence with its anti-magnetic properties, as well as bearing a Master Chronometer certificate from the Swiss Federal Institute of Metrology (METAS).

Snoopy plays a vital role on the dial of this watch, embossed on a silver medallion at 9 o’clock, wearing his famous space suit in the exact style of the silver pin that NASA astronauts give to award recipients. The dial is also in silver and laser engraved with Ag925. It includes two more blue sub dials, as well as blue PVD angle-shaped hour markers and hands.

On the case back, Snoopy has gone into orbit on his animated black and white Command and Service Module. When the chronograph seconds hands is in use, Snoopy takes a trip around the mysterious far side of the moon with the lunar surface decorated on the sapphire crystal. The Earth disc rotates once per minute, in sync with the watch’s small seconds hand, and symbolises the precise rotation of the Earth.

This timepiece comes with OMEGA’s full 5-year warranty, and will not be a limited production. Owners will receive this watch in its own Apollo 13 presentation box that contains a microfibre cleaning cloth, a brochure, and a magnifying glass to help you get up close to the details.