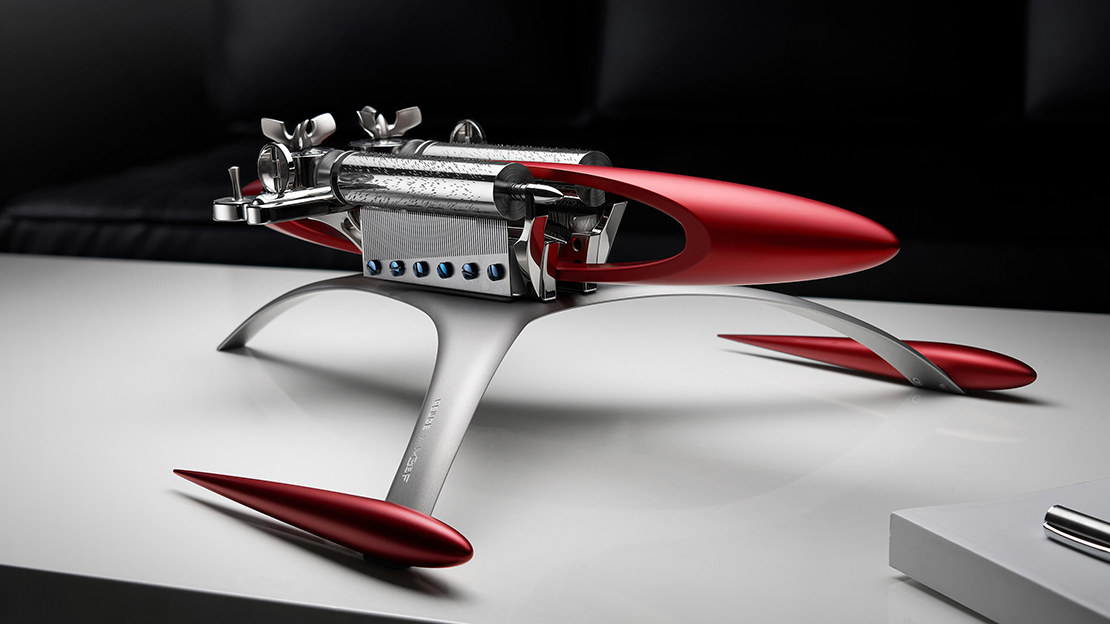 Back in 2013, MusicMachine 1 opened the floodgate for MB&F to collaborate with external creators on projects outside the scope of the wristwatch; it initiated a new category – “Co-creations” – that invited MB&F to a world beyond that of miniaturized horology. And it did not tell the time: rather, it was a music box created with REUGE that uprooted everything we thought we knew about music boxes, from the design all the way to the music. MusicMachine 1 featured all the traditional, time-honoured elements of a superlative high-end music box, but configured in MB&F’s individualistic manner. It was a music box for today.

“How you make a music box is still something that is mind-boggling for the mere mortal,” says MB&F founder Maximilian Büsser, who remains awestruck by the mechanics of the machines. High-end mechanical music boxes share many similarities with their horological counterparts, both technically and aesthetically, with similar fine finishing techniques. For MusicMachine 1 Reloaded, energy is derived from coiled springs and transferred by gear trains; the unwinding speed is carefully regulated, thanks to fan regulators similar to those found in traditional minute repeater watches. This puts in motion two cylinders, which contain the “scores” of the melodies, materialised by 1,400 precision-placed pins. When the cylinders revolve, the pins pluck the teeth of steel combs, each containing a bespoke selection of 72 hand-tuned notes. Each comb forms a unique pair with its corresponding cylinder; neither can play properly without the other.

REUGE was founded in 1865 in Sainte-Croix, Switzerland and is today the premier manufacturer of music automatons on the planet with more than 155 years of expertise and experience. Between 2013 and 2015, MB&F and REUGE released three MusicMachines, each playing different songs – untraditionally, modern music – and each model was a success. Maximilian Büsser and his Friends decided it was time to redesign the first MusicMachine and issue another edition.

“The original design was done by young Chinese designer Xin Wang,” says Büsser. “But we had Maximilian Maertens, who is designing a lot of new crazy cool stuff with us, work on this one with the idea of being a little bit more streamlined, a little bit more open.”

Like the original version, each of the cylinders on MusicMachine 1 Reloaded plays three tunes, all personally selected by Maximilian Büsser. The left cylinder plays the Star Wars theme, “Imperial March” from The Empire Strikes Back, and the theme from Star Trek. Back on earth, the right cylinder plays Pink Floyd’s “Another Brick in the Wall,” Deep Purple’s “Smoke on the Water,” and John Lennon’s “Imagine.”

“When it comes to design and creativity, MB&F is the specialist,” says REUGE CEO Amr Alotaishan. “However, when it comes to execution and excellence of product – the technical, engineering, and manufacturing side – we are comfortable. The ability to have a creative design that can reach out and touch people is amazing, while we know that we can produce the complementary quality when it comes to the technology.”

“What we have designed now is more complex than the original MusicMachine,” Max Büsser explains. “Nine years later, with what I’ve learned, how I’ve evolved, and my tastes have changed, we basically reworked some of the details to have it become what I would want today. I’m not saying that I don’t like what we previously did, it’s just that being the creator I am today, this is what I would find cooler.”

What Büsser and Maertens have created is more visually organic than the original MusicMachine, with the young Berlin-based designer additionally introducing the concept of what he calls “more airflow.”

The MusicMachine series is really important for Max Maertens, even an inspirational steppingstone of sorts. When he first saw the original MusicMachine back in about 2015 as a design student, it inspired him to change his direction and way of thinking. So it was something of a dream come true for him to work on a redesign of precisely this piece. “But I made it into something that is more aerodynamic, more like my own design language,” he explains. This involved Maertens using more science as a base and looking to aerospace engineering. “The entire piece is in kind of a flow,” he says. This is especially visible in the wings, which now look as if they are in a wind tunnel with invisible airflow around them.”

“I took the existing idea of how and where we place the mechanics and changed everything else about the MusicMachine, without losing the main essence of the previous piece – so that it really looks like a ‘reloaded’ version,” Maertens says.

The main structure of MusicMachine 1 Reloaded is essentially the same, but Maertens rethought several key elements. One big change is that the entire body is now made of anodized aluminium, in contrast to the wood of the original MusicMachine. “The process of machining aluminium is so appealing, so precise, and its surface is so beautiful,” he says. But the main point is that Maertens wanted to ensure that each individual piece of MusicMachine 1 Reloaded looks as if it were one fused piece.

“And I never hide the mechanics,” he says. “That is something really important for me as well.”

The music
MusicMachine 1 Reloaded doesn’t just look like something from a science fiction film; three of the melodies have been beamed directly from sci-fi classics.

MusicMachine 1 Reloaded’s left cylinder plays the theme from Star Trek by Jerry Goldsmith as well as the theme from Star Wars and the “Imperial March” from The Empire Strikes Back, both by cinematic music maestro John Williams. While the first two are stirring anthems evoking heroism and adventure, the latter will have you battening down the hatches and raising the shields as it signals the imminent arrival of the villainous Darth Vader.

But MB&F is much more than sci-fi; the brand’s creations are edgy and iconoclastic relative to the rest of the high-end watch world. This rock ‘n’ roll attitude is neatly symbolized by the three melodies of the right cylinder: John Lennon’s classic anti-war anthem “Imagine,” Deep Purple’s riff-tastic “Smoke on the Water,” and Pink Floyd’s memorable social commentary “Another Brick in the Wall.”

Büsser drew on his youth when choosing these for the original MusicMachine, and the selection was a daunting task as he related at the time. “In addition to the science fiction themes, I wanted to include three songs that were important to me during the first 20 years of my life. From a long list, I managed to whittle it down to three, but it was quite an ordeal!”

With the 20/20 vision of hindsight, he hasn’t changed his opinion on why he chose them much. “Remembering it was my first co-creation, it was also an era where everything was still about my youth, my childhood, etc. And it was also about – and it still is about – creating something I would like to own. What I would like to listen to is of course themes from Star Wars and Star Trek (in my youth I was a cinema usher). I thought it was so cool to have Deep Purple’s “Smoke on the Water.” Going to see traditional maker REUGE and saying I want to have Deep Purple on my music box, that’s priceless.”

Faithfully creating music… mechanically
REUGE recreated the melodies mechanically. Firstly, a REUGE musician examined the pieces of music and identified the most recognisable passages from each. The musician then set about recreating these passages for the music box, keeping in mind that one cylinder would contain the three rock melodies, and the other cylinder would have the three sci-fi inspired melodies, and that each cylinder’s pins would pluck one 72-note comb.

Working out two groups of three arrangements, each one limited to approximately 35 seconds, and the multitude of notes that these songs entail (some notes are used by all three melodies, while some are exclusive to just one melody) represents a considerable technical and artistic achievement in which the musician’s brain, sense of expression, and emotional dexterity top any computer.

MusicMachine 1 Reloaded has two independent movements, each comprising a winding propeller; a mainspring barrel (looking like a piston under the propeller); a horizontal cylinder with pins creating three melodies; and a vertical comb with individual hand-tuned teeth sounding each note. While it would have been much easier to duplicate the two movements and just change the melodies, MB&F’s original concept called for perfect symmetry, and if the movements were identical the comb on one cylinder would not be on the outside. So REUGE took the unprecedented step of configuring the two movements as mirror images of one another, which meant completely inverting the design of the movement components and architecture.

The combs
The two vertical combs look like air vent grills on either side of the vessel’s main body. Each comb contains the bespoke selection of 72 notes chosen by the REUGE musician according to the three melodies that cylinder will play. The combs are hand-tuned from a unique steel alloy specifically selected for its acoustic impact. For bass notes, the weight of the tooth is extended at the back by the traditional method of adding lead. A machine then tests the frequency of each tooth and minute amounts of material are removed to accurately tune each note. The hand-operated tools that REUGE uses in this process have all been developed in-house.

Tiny transparent, synthetic feathers are added behind the bass note teeth, acting as dampers so that the note resonates optimally. The comb is finally attached to a brass ‘vibration plate’ passing through the main hull, with six heat-blued screws. The vibration plate transfers the sound to the case, which in turn amplifies the sound even more. Once the comb is fitted, the musician’s ear is required again for the final fine tune. “Looking at that in action is just beautiful,” says REUGE CEO Amr Alotaishan. “It adds to the complexity of what’s being done, and it adds into the perceived value. You don’t want to hide that. People really like to see the engine.”

The cylinders
The beautifully hand-finished cylinders gleam like a pair of imposing reactors atop MusicMachine 1 Reloaded’s main hull. The cylinders essentially contain ‘the scores’ of the melodies, with as many as 1,400 precision-placed pins that pluck the teeth of the comb as the cylinder revolves. The REUGE musician determines precisely where to place every single pin. The pins are shaved then polished to ensure uniformity of length. Finally, a special hot resin is applied inside the cylinder, which, when hardened, rigidly fixes the pins to maximise sound quality.

Once one melody is played, the cylinder moves slightly along its long axis, and this change of position aligns the right pins with the right teeth to play the next melody. Each melody lasts approximately 35 seconds and corresponds to one complete revolution of the cylinder. The cylinders are linked via visible gear trains to MusicMachine 1 Reloaded’s rear engine room.

Fan regulators
On either side of the propeller-like winding levers are distinctive vertical circular panels. While these look as though they may be radar dishes to navigate an asteroid field or force field generating devices to repel enemy proton torpedoes, they are actually the cylinder speed regulators. When fully wound, the main springs tend to turn the cylinders faster than when nearly unwound. To compensate, these circular fan air regulators provide exponentially more resistance when rotating faster than slower, allowing for a constant revolution.

“I think it’s cool. If I had nothing to do with this company, I would consider buying it,” Amr Alotaishan summarizes the emotion MusicMachine 1 Reloaded brings up in him. “We bring traditional crafts to a younger, up-and-coming world by magically transforming them so that they find the fascination as well.”