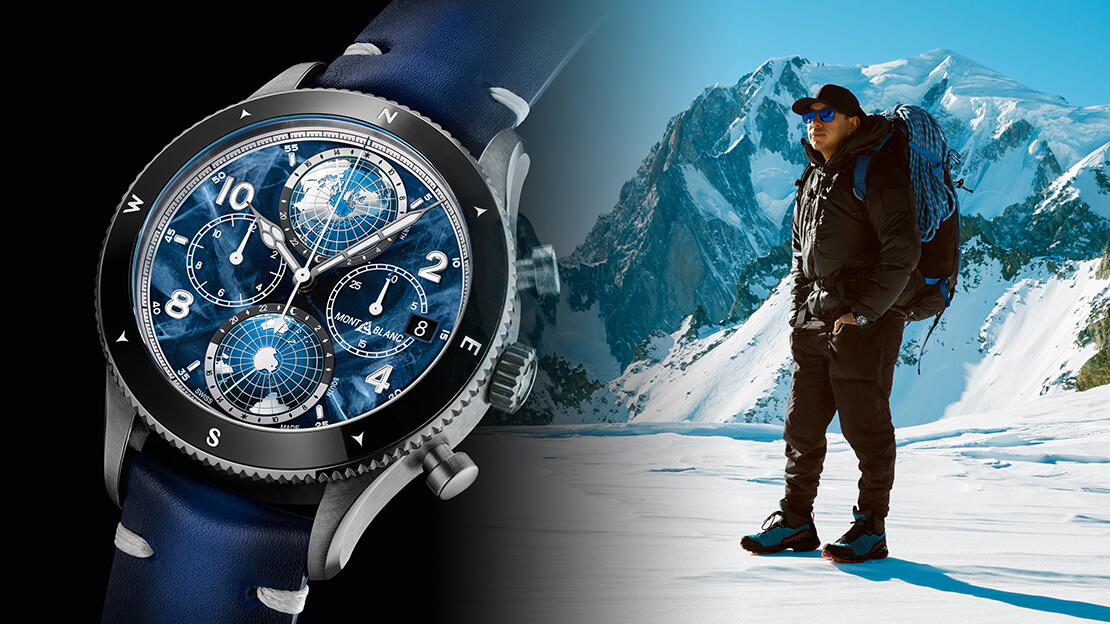 Montblanc hosted a special evening to mark the launch of its new timepieces at Watches & Wonders, including the Montblanc 1858 Geosphere Chronograph 0 Oxygen LE290 featuring a brand-new chronograph movement with zero oxygen. Taking watchmaking to new heights, the timepiece was worn for the first time on the night by mountaineering superstar Nimsdai Purja who will be taking the new watch on his upcoming expedition to the summit of Mount Everest without supplemental oxygen, putting the timepiece through the ultimate test.

“As a mountaineer, I rely on minimal, reliable equipment, so I am really excited that Montblanc has developed this watch to accompany me on my expedition. Not only is it a beautiful timepiece, but it is totally solid – there’s no oxygen so it eliminates fogging – it performs when you need it most. I’m looking forward to taking this up Everest.” said Nimsdai Purja.

This year’s Montblanc booth at Watches & Wonders was inspired by the beauty and wonder of mountain glaciers featuring an ice sculpture and frozen textures, the perfect backdrop for the introduction of the Montblanc 1858 Iced Sea Automatic Date, the Maison’s other major watchmaking novelty for 2022. Montblanc first ever sports diving watch features a “frozen” dial inspired by the glacial lakes of the Mont-Blanc Massif and the captivating texture of the ice with its interlocking network of crystals that have been frozen in time for millennia.

During Watches & Wonders, Montblanc reaffirmed its commitment to protecting the mountains and its glaciers for future generations by announcing a donation to Nimsdai’s Big Mountain Clean Up, an initiative of his Nimsdai Foundation aimed at addressing the waste generated by the increasingly popular mountain expedition culture by providing full time, seasonal clean up teams on all widely climbed mountains around the globe paired with associated regional recycling and educational initiatives. In addition, Montblanc has become a founding partner of the Foehn Fund, supporting educational programmes for young people on mountain preservation and climate change to protect the alpine ecosystem around the Mont Blanc.