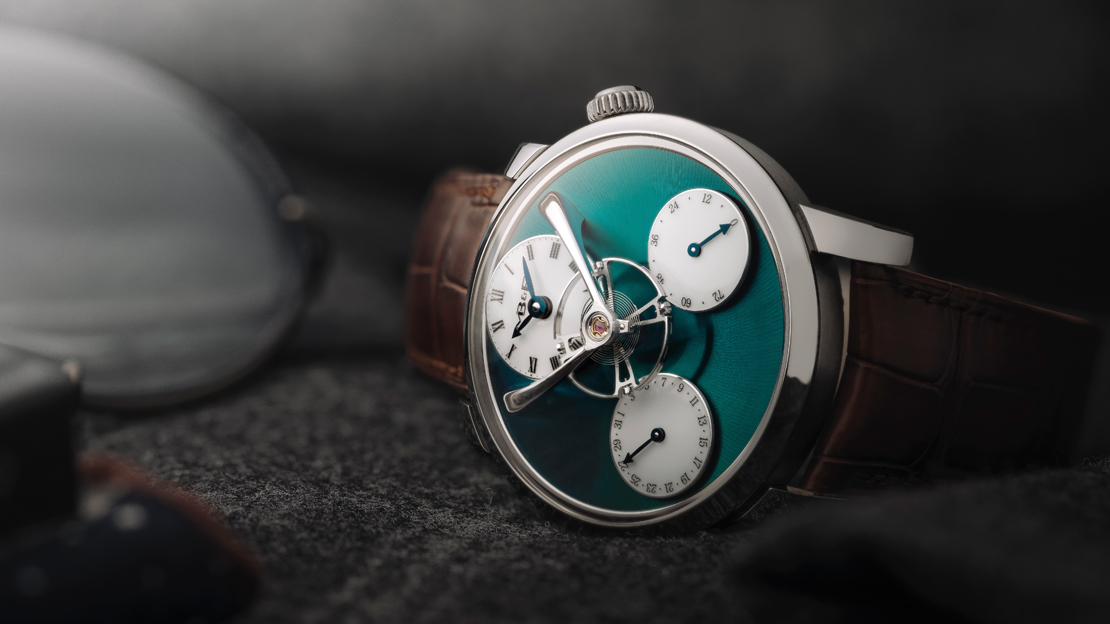 FOUR renditions marked the MB&F Legacy Machine Split Escapement when this groundbreaking timepiece came out in 2017. All wore cases made of white gold. All had frosted dials — blue, ruthenium, red gold and yellow gold — reminiscent of antique pocket watches. Only 18 examples of each version were made. The watch promptly secured a nomination in the Men’s category at the 2018 Grand Prix d’Horlogerie de Geneve, the “Oscars” of the horologic planet.

Monsieur Maximilian Busser and friends (which include designer Eric Giroud and movement specialists Stephen McDonnell and Chronode) have added to the Legacy Machine Split Escapement collection, now available in 33 examples rather than just 18. The new piece is defined by a 44-millimeter-wide case (same as the white gold versions) made from grade 5 titanium and a green dial whose sun-ray finish could turn bluish depending on the angle it catches light. Making this dial calls for a complex CVD treatment process; a chemical reaction decomposes a material and turns it into a thin film over the dial surface.

If making the dial sounds fiddly already, the movement takes things a few notches up. And quite literally, at that. The new watch retains the mechanical bits of its predecessors, so it has its balance wheel hovering high above the dial and the three subdials (hour and minutes at 12 o’clock, power reserve indication at 4 o’clock, date at 8 o’clock). Propping it is a gracefully arcing bridge which MB&F previously used in two other forms.

This balance mechanism transports its impulse jewel, anchor and escape wheel to the back side of the movement, nearly 12 millimeters away. The move creates the illusion the suspended balance wheel is oscillating all on its own, and without even any link to the mainspring. Such a setup explains its “Split Escapement” tag.

The layout is not without complications, of course. Horologic principles dictate that components making up the balance assembly be placed as close to one another as possible in order to minimize disturbances to its operation; the farther the impulse jewel from the balance wheel is, the more prone it is to disturbances like shocks or distortions. Which would then affect its timekeeping assignment. It is the balance assembly which regulates the energy supplied by the mainspring, after all.

But, quite simply, MB&F asserts it has this problem licked by fitting both ends of the balance arbor with anti-shock jewel bearings, and by separately affixing the bridge holding the anchor and escape wheel so this could be fine-tuned. Well, the brand has used the split escapement since 2015 when it brought out the Legacy Machine Perpetual. It has already proven it knows what it speaks of.

While oscillating at a “lazy” 18,000vph, the split escapement’s consequent long balance arbor — becoming heavy in the process — means the component tends to “rob” energy intended for the balance wheel. MB&F’s solution is to kit the 35-jewel handwound movement to which the split escapement attaches a pair of mainspring barrels. The result is a generous 72 hours’ worth of power reserve.

Whichever rendition, the Legacy Machine Split Escapement is a genuine horologic wonder. And it looks really fresh in green.