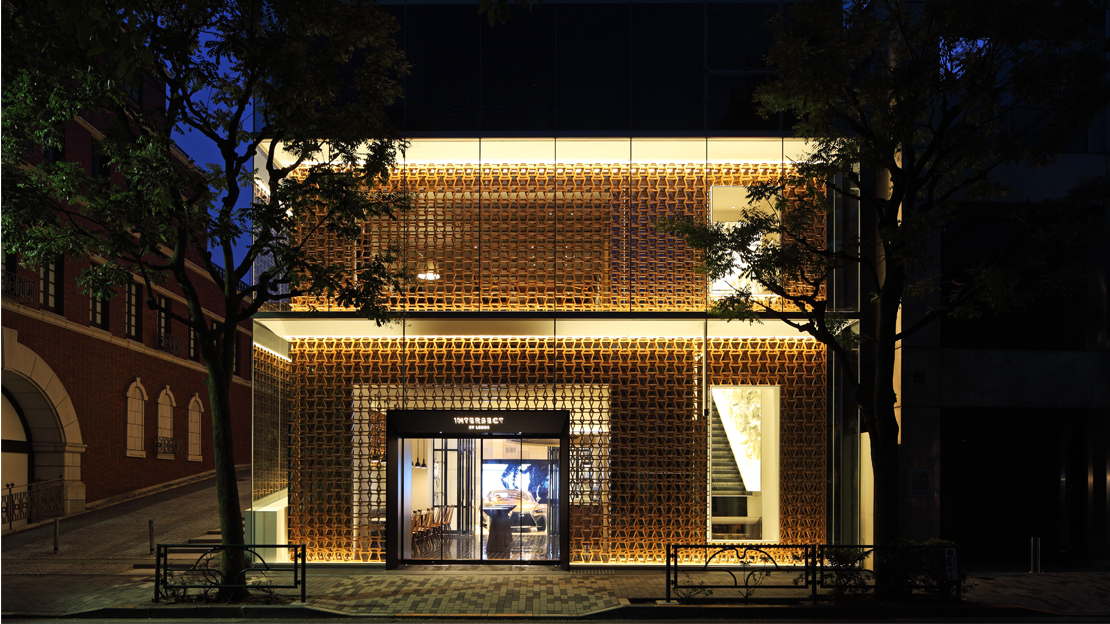 TOKYO’S Aoyama district has no lack of ultra-chic structures, its streets defined by architecture which contrasts sharply against much of the aging office tower blocks marking the Japanese capital. On one of the place’s even more swanky streets sit Intersect by Lexus, a “brand luxury space” where people can experience Lexus without sitting in a car. Neither a dealership nor high-end store, in this place guests are instead immersed in Lexus culture via design, art, fashion, culture, film, music and technology. Plus really good coffee.

Lexus’s first concept space opened in 2013. Since then two other Intersect by Lexus structures have opened in Dubai and New York City’s trendy meatpacking district. The Tokyo place is a modestly sized cube structure wrapped in intricate latticework and glass. It’s easy to walk past it, or fail to notice it from across the narrow street as it competes for attention against the storefronts of a number of global luxury brands. But if discovered — a discreet sign atop a black stonework doorway announces its existence — one enters a place of high style and hipness.

Intersect by Lexus in Tokyo is detailed with monochromatic ceramic tiles and wood paneling and metal surfaces. Artsy books and framed artsy pictures appear randomly arrayed, but these are likely to have been meticulously curated to appear as such. The designer apparel and other items sold at the shop — not necessarily branded or even co-branded with Lexus — swank about in high style. On the wall by the stairway stands an all-white, glass-encased bas relief sculpture fashioned out of various car parts — chances are the most tasteful bit of automotive-theme art there is. Really, this is Lexus’s paean to pulchritude and pricey coffee.

Without doubt, it also is Lexus’s style standard, its design didactic for everything it does.

This is quite apparent when a visit to Intersect by Lexus happens on the eve of the reveal of Lexus’s LF-30 Electrified concept car at this year’s Tokyo Motor Show (ongoing until November 4). All swoopy and rakish, like present Lexus models are, the LF-30 Electrified flaunts concept car styling, meaning it has flamboyant details which would likely get toned down, if not completely eliminated, as the model transitions to production guise. But what features that could make it to showrooms speak Lexus’s design vocabulary as succinctly as the architecture and décor of Intersect by Lexus do.

Presenting a glimpse of what future Lexus EVs would look like (or until 2030, at least), the LF-30 Electrified has a short hood and a truncated but relatively tall rear end, with wheels placed at the absolute corners of the car. Being a battery electric vehicle propelled by motors fitted to each of the four wheels allows for this architecture; with no bulky engine and gearbox, space could go instead to the cabin. Adding brand-signature trimmings, like the spindle grille, easily makes the LF-30 Electrified identifiable as a Lexus.

The LF-30 Electrified’s cabin is as obsessively designed as the rooms are at Intersect by Lexus. Accessed via a pair of “gullwing” doors, it is lined with sustainable materials like charred cedar (used on the floor and steering wheel) and recycled metal (made into fibers and then turned into pleated door trim). It is decidedly high-tech, quite sci-fi in there, with front seats made to look like those found on the pointy end of an airplane, and rear ones that use artificial muscle technology so these mold to the shape of the body resting atop them. A voice- and gesture-controlled “SkyGate” AR panel can display various information, including a realistic star-filled sky, videos and even navigation.

The backdrop for the LF-30 Electrified’s reveal at the Tokyo Motor Show echoes Intersect by Lexus’ vibe as well. As Lexus increasingly pitches itself as a luxury lifestyle brand, it set up at the show the “Lexus Senses Theater,” a space where people can experience the “stimulation of the five senses.” The setup’s audio theater, for instance, plays the sonorous engine notes of the Lexus LFA supercar. In the visual theater, it’s the details of the Lexus LC, which change appearance according to the time of day and the viewing angle, that are highlighted.

As Lexus puts it, the company aims to offer a luxury brand that provides unique values. And chief among these, obviously, is high style.