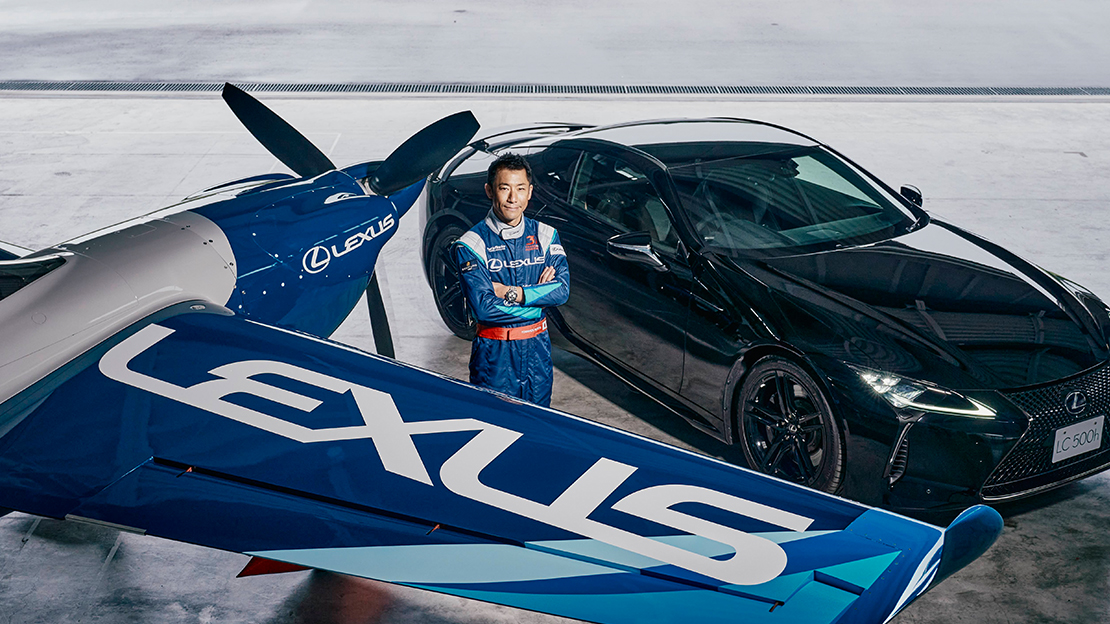 Represented by air race pilot Yoshihide Muroya, and Lexus announced today that they have signed a team partnership agreement and jointly taken up the challenges of making history by winning the first Air Race World Championship (The Air Race), an air race series starting next year, and of helping to create the future by contributing to the creation of an even-better carbon-neutral society.

Muroya and Lexus since 2016
In 2016, Lexus started a partnership with Muroya, a Japan-based, world-renowned air race pilot. Tightly aligned with Muroya’s inspirational never-give-up attitude and spirit, Lexus has since continued to sponsor him.

In 2017, Lexus and Muroya launched a “Technology Exchange Group” to regularly study each other’s technologies and explore the possibility of new technologies in the area of aircraft and automobiles. The discussions led to the joint development of a control column grip for Muroya’s aircraft that incorporates Lexus’s sensitivity technologies, as well as a new way for his aircraft to turn based on aerodynamic analysis stemming from Lexus vehicle test data. This year a carbon-fiber reinforced plastic (CFRP) spoiler, developed by incorporating aerodynamic technology used in aircraft design, was even adopted for use in the LC and sold in select regions.

Jointly making history as “Lexus/Pathfinder Air Racing”
The coming debut of The Air Race spurred Lexus and Pathfinder, to form a partnership agreement. Realizing the need to further accelerate their joint efforts so that they could quickly link the technologies and know-how of both sides to develop racing machines, they established “Lexus/Pathfinder Air Racing” as a joint race team. Lexus intends to dispatch technical coordinators to support the development and verification of technologies in the fields of aerodynamics, cooling, and ergonomics, to build a strong team structure that can lead Muroya to victory. This new team, “Lexus/Pathfinder Air Racing,” will strive to make history by winning the first championship of The Air Race.

Creating an even-better future and a carbon-neutral society
Based on the idea that “grueling air races train people and train technology,” Lexus and Muroya will apply the technology and know-how cultivated through air races to create a better society in both respective fields. Lexus will utilize its aerodynamic, cooling, and weight-reduction technologies and know-how gained through grueling air races to create ever-better cars for the realization of a carbon-neutral society. In addition to air racing, Muroya will continue to develop new talent that will lead to the next generation of mobility, while also creating an airfield for testing in cooperation with Fukushima Prefecture. With the cooperation of local companies, he will promote carbon-neutral aircraft starting with supporting instructional education of light-sports aircraft (LSA) manufacturing. Lexus and Pathfinder will work toward new possibilities in the fields of both automobiles and aircraft.

“With the strong support of Lexus, we will strive to become the first champion of the new Air Race. I believe that an exciting new story will emerge as fans and team crew come together as one.”

“Lexus will take on the challenge of an exciting air race together with world-class athlete Muroya. With the excitement and smiles that motorsports bring and the gratitude that we learn from athletes as our inspiration, we will tackle from a new perspective the goal of Akio Toyoda, Lexus Brand Holder, to create a better car based on motor sports. Please look forward to Muroya’s and Lexus’s continuous challenge and evolution.”